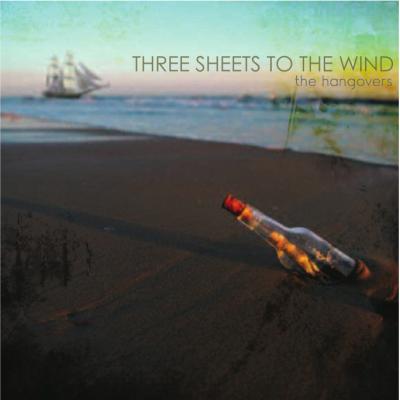 There is often so much emotion on Three Sheets to the Wind it'll make your chest ache. And nothing is ever simply sung, but always expressed, adding significant depth, commitment, and trained carefulness to The Hangovers' final product. It's really quite something, and quite inconceivable considering the dramatic line-up here that ranges from intensely somber to totally hilarious. Where to begin?

You know, let's start with the Cornell factor, because these boys are darn proud of their school. Now don't get confused — Oh, Chariot is not the Gavin DeGraw hit that appears on most collegiate a cappella albums these days. Rather, it's a Cornell University Glee Club tune where The Hangovers valiantly sing: "We are from Cornell! We are a race of hairy-chested men!" Further amusing lyrics include: "Don't send my boy to Yale or Brown, I'd rather see him dead, dead, so dead." It's also got a nice ole-timey feel, and I imagine decades of Cornell alums will love this one. Keeping with the Cornell-specific hootenanny, You Got a "C" parodies The Little Mermaid's Under the Sea, with original (and quite comedic) lyrics from members of The Hangovers. Finally, there's one more Cornell shout with Ave Maria, which the liner notes indicate "premiered in the United States by the Cornell University Glee Club". Yep, these guys love their school, and their school spirit really adds to Three Sheets to the Wind.

A number of non-Cornell songs and efforts make a strong impression, too. Here (In Your Arms) is a prime example of where a heavy hand in production perfectly suits the song it's enhancing. It's absolutely addicting. Percussion is strong and creative throughout Three Sheets to the Wind, and sounds as well-planned and featured as solos do on albums. Percussion is certainly well attended to on Three Sheets to the Wind, making the overall work even greater. The final three tunes concluding the listed tracks are somber and powerful, and for better or worse, really change the whole feel of the album. I say for the better, seeing as Gulf War Song in particular is so very, very captivating and emotionally rousing that it has a way of staying with you. And isn't that the goal of a performance?

That said, there's no need for the hidden tracks on Three Sheets to the Wind. Lake Cayuga, in rousing sea shanty style, is super fun and would be great as a full-fledged track in the beginning of this album. But why finally end, through a second hidden track, with silly and rambling pirate talk? The power from the final three listed numbers evaporates, and that's quite a shame. I'll be stopping the album after Ave Maria from now on, and maybe you should, too.

But one can't overlook the numerous high points on Three Sheets to the Wind, and all the passion and carefulness that went into making it. This is one fine album from a race of hairy-chested men.

My first impressions of the Cornell Hangovers Three Sheets to the Wind (I mean, other than how great a title that is for a college CD) are those of history. The Cornell Glee Club, which the Hangovers are a subset of, were the first group to perform Franz Biebl's Ave Maria in the United States. Biebl's rendering of the popular Ave Maria text is arguably the most famous and popular version of the song available to choirs everywhere in the United States and beyond. It's always been a favorite of mine, and upon reading this in the liner notes I had a moment of, "Wow. That's really interesting". They close out the album with it, and I bet it's fun for the Hangovers to be a part of that history.

For a more current representation of the Hangovers, one doesn't need to go much further than track 2: Ignition (Remix) by Nelly, which will soon appear on the 2009 BOCA compilation and deservedly so. The first half of the track has a great mix of rap, repetitive instrumental line, and appropriate block chords and syllables. The second half of the track starts to drag and hit the wall with the entrance of Soulja Boy and the subsequent slow-down of Ignition, but the opening is so good I guess the rest of the track was allowed to hit the snooze.

If only the rest of Three Sheets to the Wind were as good as the first half of Ignition (Remix), the Cornell Hangovers would start to turn some heads. Attention to detail is just not there the rest of the voyage. Production seems to scale back, and the inner voices are the casualty as they get buried in the mix. It sounds as if the rest of the contemporary tracks are covered by a mute. You know what I'm talking about, right? The little device shoved into one end of a horn to muffle the sound for effect? Only, in this case, it has the opposite effect as the chord is lost. It's not that you can't hear the inner voices at all, but what you can hear of them is not a clear sound. Ah, I guess you make that sacrifice in order to gain a fuller, punctuated sound, right? That sound seems to be captained by the mixing efforts of James Cannon and Dave Sperandio. Songs like Impression That I Get by the Mighty Mighty Bosstones (a largely horn driven band), get the short end of the stick in this production style.

The Hangovers have a consistently good arranging style that allows all the parts to grab the spotlight periodically, as is the case with Here (In Your Arms), offering up the most interesting version of the song I've heard this year. The song really fits the timbre of Alan Garcia well, as he safely navigates the high tessitura.

Comedy? Really? You Got a "C" is a breath of fresh air into collegiate a cappella. It seems like it's been years since I've heard a comedy track, let alone one that is worthy of praise. Justin Vitanza gets an "A" for his arrangement of this romp through typical college life to the tune of The Little Mermaid's Under the Sea. The following track is more reason to think that the Hangovers aren't like most college groups these days with the cynical yet heart-wrenching Gulf War Song that shows off some of the best singing chops I've heard in a long time.

The Hangovers close out Three Sheets to the Wind with Biebl's Ave Maria, and while they will likely garner a lot of praise for their upcoming BOCA performance, I appreciate their insistence to stick with their glee club and choral roots on several tracks. I'd hate to say that The Hangovers need to decide what kind of group they are, but maybe they need to decide what kind of album they're going to make because they really have the talent to go either way with success. While not perfect, I think you'll like this album for the variety it provides.

The Cornell Hangovers' vaguely pirate-themed release, Three Sheets to the Wind, is a robust mix of traditional and classical choral ensemble pieces, 1990s mainstream rock, modern hits, and a few joke songs to keep things lighthearted. Surprisingly, this grab bag of genres works well, mostly because the singers are generally above average and the production is clean, sharp, and effective. There is plenty of quality music on this album, and in general, the tracks' merits far outweigh their faults.

The Hangovers offer an impressive display of vocal talent on this recording, especially when you consider that a cappella groups are a dime a dozen at Cornell and the talent pool is presumably spread fairly thin. Soloists are almost uniformly strong, especially Clayton McCarl, who delivers a heartfelt performance on Gravity, and Evan Graham, who really grooves on Secret. The block is just as strong, offering up a nice, rich sound, consistent tone, and truly impeccable dynamic work. This is one of the most musically sound a cappella groups I've heard in a while, and it really comes through in their more choral pieces.

The production compliments this musicality nicely. Dynamics, articulation, phrasing and the like are all preserved, and it adds much to the experience. Certainly, the tracks are cleaned and polished, auto-tuned, and sampled, but it's all done tastefully, and I imagine that it was a conscious effort to ensure that robo-a cappella was avoided. Some songs are much more heavily processed than others Here (In Your Arms) sounds like any other techno song on the radio), but because this type of production is applied only to specific songs, it becomes clear that this is a well-executed artistic decision and not just a bandage over poor rough tracks.

I have to mention, however, that one area of this record is a bit disappointing: the arrangements. Rarely on this record does one hear multiple layers, complex voice leading, or other arranging techniques that would enhance the quality of the charts. Surely, some songs are beautiful in their simplicity, but so much more could have been done with, say, Impression that I Get or Waiting on the World to Change. Much of these songs consist of a bass line and a unison upper-part rhythmic line, or otherwise whole note chords with ornamentation sprinkled in here and there. This issue is prevalent throughout, and it's lucky that the many long, held notes are at least phrased well. The Hangovers must be commended for working well with the material they have. But I'd wager they'd work even better with better material. (Note: RARB's scoring method lumps "arranging" into the "Innovation/Creativity" category, so I had to take some points away there. But let it be known that the humor on this album is quite creative, and from a "branding" standpoint, the pirate theme is really well executed.)

Still, their sound is undeniably solid, and it's safe to say that most who listen will like. The Hangovers chose not to define themselves with a genre, and since they are versatile enough to pull off many different styles, it's a choice that works well. Even their joke songs are better than most — You Got a "C" (parody of The Little Mermaid's Under The Sea) is surprisingly enjoyable, well-written, and shows off the group's goofy, "it's just a cappella" side (and believe me, every group has it; only some choose to display it).

If you're a collector of fine a cappella albums, pick this one up. The Hangovers are a likable group of guys, and there's nothing on Three Sheets to the Wind that most people wouldn't enjoy. Oh, and don't worry - the last track isn't a thirteen and a half minute rendition of Biebl's Ave Maria, like your iTunes will say. Spoiler alert: There's a hidden pirate track at the end.