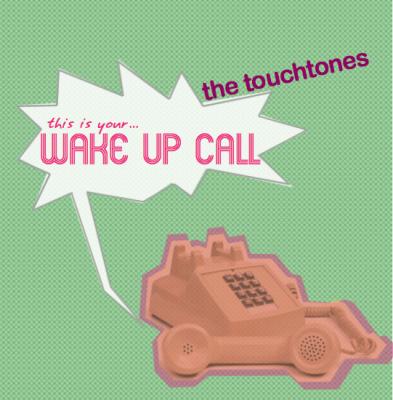 Sometimes pretty darn good, sometimes pretty darn dull, Wake Up Call pans out as an average listen after considering the ups and downs. Staying within the pop-rock genre with a splash of hip-hop for flavor, this large all-female group from Cornell tapped the right folks to help shape up their setbacks (James Cannon, Dave Sperandio, Ed Boyer), but only manages one stellar track.

On the whole, The Touchtones sound young and sweet with still-developing voices despite their legacy (they formed in 1983). You'll hear some thin soloists, some nasally soloists, some soloists that can't quite hit the center of the pitch. Percussion is present, though it's often too loud and generic. But on the plus side (and it's a huge plus), all the voices are confident and not scared of pushing their limits. They're still developing, but they're not afraid to take the spotlight.

Some soloists get the job done and a whole lot more. Notably, Meghan Ownbey succeeds in capturing an Amy Winehouse style on Rehab. The foursome playing off each other in Sweetest Girl (Dollar Bill) is strong and capable. But it's Katie Magee (with support from Meghan Ownbey) who commands our full attention on Heart of the Matter/Baby Can I Hold You. The incredible arrangement from alumna Diana Becker stands out as one of the finest I can recall from an all-female collegiate ensemble. And the delivery from Magee is so stunning that the chills-down-your-spine factor reaches astronomical heights. Wow. An unexpected mid-album masterpiece.

The group sounds well rehearsed, and the album sounds polished. To improve, more energy and thicker vocal layering in the arrangements will abate dullness (applicable to Over My Head and Take Me Home Tonight), and more doses of the unexpected (like their mid-album masterpiece) will go a long way towards a stronger future album.

The three most preponderant reactions I see, looking through my notes on this album, are "creative mixing", "nice perc", and "Man, I am sick of this song.".

The Cornell University Touchtones' Wake Up Call delivers eleven nicely crafted pop covers, with some help from James Cannon of the hegemonic Vocal Source. As you might have gleaned from my opening statement, the production is solid, but the music itself doesn't make much of an impression.

All the songs sport some nifty (and original!) effects to keep things sonically interesting. The percussion, as with all Cannon projects, is excellent. Aside from the glaring compression mishap at the end of Unwritten, the production makes Wake Up Call an album worth hearing once.

Yet the Touchtones fail to make any meaningful artistic statements in their thirty-nine minutes, perhaps relying a little too much on Mr. Cannon's mixing prowess. Throwing a wholly irrelevant song quote in the middle of Take Me Home Tonight doesn't count as artistic. I kept hoping for some gesture, some dynamic, some texture that would open up some part of my brain other than the tiny portion I use to be passively aware of Akon and Beyonce blaring from the TVs at the gym. The percussion hits hard, the leads are capable, and the mixes are cool — the craft is all there. But in the absence of any real artistry, Wake Up Call will be lost in the collegiate vocal proletariat.

Although the Touchtones' Wake Up Call has a few mediocre songs, it also has several songs that rival the best in collegiate a cappella today. These outstanding ones cause me to give the album a sincere recommendation.

Here's a quick overview of the album: the first few tracks (Wake Up Call, Rehab, and Sweet Ones) are not much fun to listen to. They sound shouty, bland, and feature moderately harsh production. When the group hits the next two songs, however, it becomes clear that this is going to be a pretty good album. And the two thereafter, Heart of the Matter/Baby Can I Hold You and Fidelity, truly make the album worth the price of admission. They are among my favorites of all the songs I've reviewed. More on them later. The final four tracks mostly maintain the high standard and close the album on a high note, figuratively speaking.

The album is full of catchy tunes from start to finish. Unwritten, Valerie, Heart of the Matter/Baby Can I Hold You, Fidelity, and Sweetest Girl (Dollar Bill) have all gotten stuck in my head for hours at a time during the last couple of weeks as I was listening to this album.

The arrangements are mostly uninspiring. The notable exception, though, is quite notable: the juxtaposition of Heart of the Matter with Baby Can I Hold You. This arrangement is masterfully done, centering around the word "forgiveness". Heart of the Matter ends with "it's about forgiveness, forgiveness, even if you don't love me anymore," after which the Baby Can I Hold You section picks up with "'Forgive me' is all that you can't say." The two songs' harmonies combine as naturally as their concepts so that, the first time, I didn't even realize I had been listening to merged songs until after the track was over and I saw the slash on the track list.

Fidelity's arrangement isn't as remarkable, but the soloist more than makes up for it. I believe this is one of the top 10 female vocals of the past year, and the song would easily make it onto my personal "BOCA" album for 2008. It's clear that the soloist doesn't take herself too seriously; she gives the song a light and airy feeling reminiscent of Sixpence None the Richer's Kiss Me. That really worked for me. When she brings a little more volume later in the song, she makes it louder without making it overbearing. Well done! She maintains a very light touch on the ascending "my heart" which repeats throughout the whole song.

Conclusion: I have listened to the album six or seven times in the last few weeks, and I'm not sick of it yet! More than that, I continue to like Heart of the Matter/Baby Can I Hold You and Fidelity just as much as I did the first time through. Without those two songs, the album would just be another pleasant one to listen to; those two, however, turn this review into a "you should seriously consider buying this" recommendation.