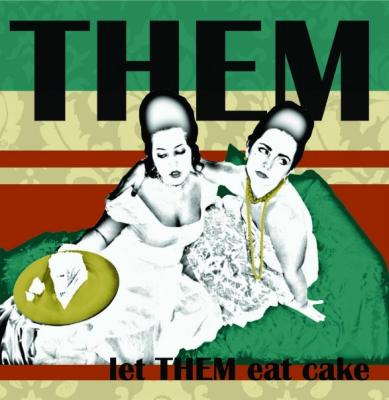 Let THEM Eat Cake is the latest release from Tulane University's THEM. With only 9 tracks and 27.5 minutes of music, Let THEM Eat Cake is on the shorter side of collegiate albums, yet still feels long to me. Other than the 1.5 minutes of opening track (The Way I Are), the songs are all on the slower side. While THEM has few issues with pitch, blend, and rhythm, there is nothing to make the album more than background music.

The soloists are decent enough, a little shaky at times, but never bad. The arrangements are simple and pleasantly sung, but with moderate energy and little intensity.

Not for one moment can I forget to listen critically and just enjoy Let THEM Eat Cake. Less than 45 seconds into each track, I feel that I have heard everything the song has to offer and will not be hearing anything different for the next few minutes. Listening to the remainder of each track, I find that to be true. Active listening is hard to maintain on repeated listenings.

Still, THEM's friends, family, and fans will be perfectly happy with Let THEM Eat Cake. To use a maligned term, it is a yearbook album.

Tulane's THEM has a lot of work to do if they plan to rise above barely mediocre and soar into the atmosphere of today's powerhouse collegiate a cappella groups.

Too often, overproduced, loud, and flashy intros to albums are just unnecessary. THEM'S The Way I Are is set up to be a perfect a cappella intro cliché, but fortunately, kicks a lot butt. I'd love to hear a version twice as a long. Maybe even triple the length. But unfortunately, their flashy start bleeds into Before He Cheats, which stands (or sits, really) among the worst covers I've heard of the Carrie Underwood staple. The soloist is forcing something she's not, and the arrangement is a huge snoozefest. Sadly, All Night Long does little to wake the listener up again.

Things pick up with tender Everything, but the fundamental theme of Let THEM Eat Cake is stubborn middle-of-the-road-ness. For a short album (a mere nine tracks), the math is particularly unforgiving: only one "good" track (and a track that's less than a minute and a half in length to boot). RARBers often remind groups that it's better to record, for example, a solid nine tracks over a mixed fourteen-track album, but THEM hasn't achieved this. There's a lot of audible auto-tune action helping the group with the fundamentals right now.

THEM's big closer, Callin' Baton Rouge, is certainly one of the more enjoyable tracks on Let THEM Eat Cake. Soloist Doug Smith has found a good way of showing off his vocal abilities without going over the top or compromising his beautiful tone. His smooth delivery, paired with a complementary spirit from the group, makes this track the right closer.

For the next go-around, THEM needs to focus on developing stronger soloists, more confident background singers, and more interesting material.

First off, has there been a greater bifurcation between album cover art and album than that featured by Let THEM Eat Cake? I opened the case expecting some bourgeois, pop-art irony meets Joni Mitchell. Instead, I get Before He Cheats.

In fairness, there is cheese on the cover, which is closer to THEM's wheelhouse, curious capitalization schedule and all.

You know what, though? The coed singers of Tulane know what THEY're doing. THIS is stupid music done stupidly well. Everything is over the top, from the arrangements to the emphatic syllables. All that's missing are the white tigers. For all I know, circus animals were in the studio, for inspiration.

It all starts with a trifling Timbaland (et al.) medley. The basses kick it, the altos name it, and the sopranos stay out of the way. Just as it should be. THEY serve to introduce Nisrine Omri, who seems to be channeling as much her consternation at being stuck with such a blah solo assignment as the rednecks she has probably never dated. Nisrine is so overqualified for THIS.

So is Tyrone Scott, who is saddled with a mundane Lionel Ritchie number, which was once a hobbyhorse of mediocre men's octets. Under his tutelage (he crafted the arrangement as well) the track sparkles a bit. Add some clever coconut pops (one of many smart productions choices) on top of the infectious sundae, and the track works.

What doesn't work is the album's midsection. Even THEM's soloists can't keep up with the histrionics of Michael Buble and Gwen Stefani, though Sweet Escape compensates with highly aware production and a smart arrangement.

The real trespass here is the Radiohead cover. I Will is one of the band's most subtle and vulnerable works. THEM's version suffers by virtue of juxtaposition, certainly, but also a lack of dynamic and sensitivity.

Fortunately for THEM, Jonny Salud could sing the tonsils off a sick toddler. His work offers boisterous repentance for the indulgence prior, and the backing vocals don't let him down on Sir Duke.

Now would be a good time to note that there is some quality musicianship on THIS album. The arrangements are innovative but appropriate, the production is forward but unobtrusive, and nobody was assigned a solo beyond his or her reach. If the track count is any indication, some judicious cuts were made late in the game.

The album concludes with a bit of hometown pride, and there is much to be proud of here. Let THEM Eat Cake is a fine example of great singers who understand the rules of the genre, and uses THEM to their advantage.

To order this album, email the group or visit acaTunes.com.