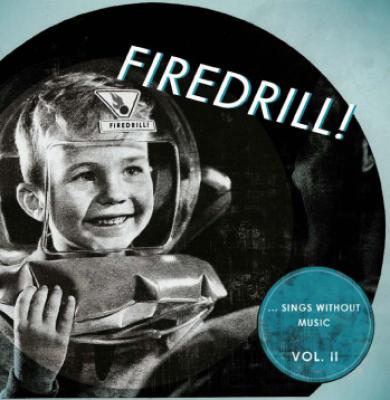 At long last, it's a full-length release from Firedrill!, and I'm delighted to report that it's been worth the wait.

Ever since they blew the roof of SoJam 2006, I'll cop to having been a huge fan of these fellows and with the exception of the marvelous Can't Stop Thinkin' 'Bout You, their 5-song EP from that same year, Rock Paper Scissors just didn't showcase enough of their best work. With ...Sings Without Music, Vol. 2, we finally get a full dose of their signature, crisp, tight, terrifically produced sound (courtesy of Ed Boyer and John Clark who split the work just about evenly).

When Firedrill! is at its best, the group seems to capture the essence of its source material without necessarily being literal in its interpretation. For examples of the former, check out the opening Workin' Day And Night and Easy Lover which capture everything you "expect" to hear as a listener, without getting too bogged down in covering every single instrumental part (as so many college groups often do). For the latter, have a listen to What A Fool Believes, the arrangement for which feels like it's just trying to do too much with too much, rather than just enough with the bare minimum.

Now to be fair, in previous years, the group's arranging efforts were aided immeasurably by the rhythmic and syllabic wizardry of Samrat Chakrabarti, who contributes a surprisingly beautiful (not a word I would typically use for this song) version of Duran Duran's Save a Prayer. But the bulk of the arranging burden on this album falls to Nate Altimari, whose arrangements are always solid if not always remarkable. Perhaps to be expected, some show a definite Samrat influence — most notably, Samrat's favored "g" and "l" syllables for simulating rhythm guitar — "ganna-let ganna-let ganna-let get get", "ganna-let-it get get", "GET-ting get get get" — are so ever-present that they almost become distracting and repetitive.

Indeed, if there is a major weakness on this album, it's in a tendency toward repetition. A groove-establishing riff is presented to open the up-tempo tracks, or a basic chordal or arpeggiated foundation is laid on the slower tracks and in both cases, it's then repeated and repeated and repeated, often with little in the way of development or variation as the song progresses. As a result, songs like Stay With You and Satan Is My Motor sound great through the first verse and chorus, but beyond that, I started to lose interest. John Clark does a magnificent job of capturing the overdriven/distorted feel of the Van Halen original in Panama, but beyond that, the arrangement just kinda sits there. What's more, the affinity for repetition also threatens to make the guys sound a bit too mechanical and sap their energy levels in the background vocals.

In truth, some of the root-cause of this trouble may also lie in the group's repertoire choices which certainly span a broad spectrum of styles and tastes. A fair amount of this material itself is inherently repetitive so perhaps there's only so much one could expect the guys to do to make it fresh and exciting. But then along comes Comin Home and I'm convinced that repetition need not be an excuse for lack of invention and energy. And along comes My Yard which does go on a bit too long but nevertheless does a first-rate job with the lazy, jazzy feel of the song and holds my interest throughout. And not unlike the aforementioned Martin Sexton track from the last album, comes the "find" of this album for me: If You're Gonna Leave, a love song by blind singer/songwriter/guitarist Raul Midon which gets an introspective, unadorned treatment from arranger Eric Fosbury (check out Midon on YouTube performing the song live in Berlin to get a sense of just how well Fozz did with his arrangement).

I realize I seem to have spent a fair amount of the time on the negatives but perhaps it's only because my expectations were so high to begin with. When those whose work you greatly admire seems to falter even just a smidge, it's hard not to obsess over the imperfections and it's easy to ignore all the good stuff. So even with my critiques above, let me be clear about this too: this is a first-rate album with at least 4-5 tracks you probably will want to add to your regular a cappella playlist. Do yourself a favor and buy it ASAP.

When you get blessed with hearing a Firedrill! album, several factors jump out at you and make you want to scream. Firedrill! is a pretty amazing group. You can't really comprehend how great Firedrill!'s first full-length album is unless you hear it for yourself. The whole album is spectacular but highlights abound. Namely musicality, production and soloists.

Firedrill!'s outstanding musicality permeates every track on the album. The guys sing with a passion that is infectious. There is an ever-present joy in their sound. The arrangements are exciting without being overly complex, though the repetitiveness of vocal lines can get a bit boring on some songs. Judd Tomaselli's bass lines are imaginative, dirty, swinging, full of funk and rock-out depending on song and groove. He gets it. Gets it well. And delivers with an aplomb that lets you know he's the master at his craft.

Even when singing the most heart-wrenching ballad, the energy is intense. The up-tempo numbers like Workin' Day And Night and Soul Vaccination start out strong, rough you up a bit and leave you sweaty. Satan Is My Motor and Panama seem a bit gimmicky, but aren't bad renditions of the songs. They are masters at the jazzy-R&B-infused power ballad, but could improve on the selection and performance of their pop choices.

Engineers John Clark and Ed Boyer have shown restraint in over-effecting the tracks. The guys engage you with their voices instead of relying solely on studio pyrotechnics. You hear and understand each nuance of an individual guy's voice. Their sound captivates by fusing layers of natural backgrounds with more processed vocal lines. Boom! Crash! PFFT! The drumming could be even bigger throughout, but it always fills the pocket. The two "off-mic" performances (my code for the more live-sounding production techniques) of Stay With You and If I Ain't Got You should bring tears to your eyes.

Sometimes the group pushes a soloist beyond his limits with varying levels of success as a result. But when a track ignites, man this is the epitome of a cappella music. My favorite track on the album is Comin Home as sung by Paul Toms. Paul's development as a singer and performer hits an apex with this track. I've watched his growth through his early days as a member of the BU Dear Abbeys through his tenure with the Hyannis Sound, and he's truly blossomed. Nate Altimari's phrasing and delivery is just short of perfection. Barnicle's My Yard will stay with you long after the track is over.

Victor Sandman's parents should be given access to Fort Knox as back payment. It still wouldn't be enough money to thank them justly.

The best albums are the hardest to review. I don't want you to read about what Firedrill! has come up with; I want you to hear it.

But, for the literary minded, here's a little something to satisfy you. I'll state the facts upfront: I'm pretty sure it just doesn't get any better than this. There aren't any weak tracks, and apparently you're not accepted as a Firedrill! member unless both your musicality and energy level is legendary. In trying to think of ways to somehow top ...Sings Without Music, Vol. 2, I can't. Scary to think what the proverbial "Vol. 3" might hold for us. "Singing live from the moon, heard all the way on Earth with the naked ear, it's Firedrill!"

While the entire album is incredible, the tracks you should really dig into, as a lover of a cappella music, are the "Now they're just showing off" tracks. Because they're not showing off. They're just that much better than everyone else.

Nominee #1: Workin' Day And Night
Why: Brazen a cappella that demonstrates the absent vocal boundaries of Firedrill!. Crazy percussion, crazy ranges, crazy energy, crazy creativity. Far too difficult for mortal a cappella performers to pull off.

Nominee #2: Got To Get You Into My Life
Why: You've never heard The Beatles like this. And given that The Beatles are the most covered band of all time, that means you really need to hear this. A pinnacle arrangement.

Nominee #3: Soul Vaccination
Why: Seriously, who is running the vocal percussion/rhythmic aerobics show here? Because it's awesome.

Nominee #4: Easy Lover
Why: The '80s rocked. When put in the capable voices of Firedrill!, holy buckets, it's almost too much to handle.

Go ahead and buy ...Sings Without Music, Vol. 2 so you can cast your ballots. What a spectacular accomplishment!