A Little A Cappella: Polish-Irish Harmony (2009) 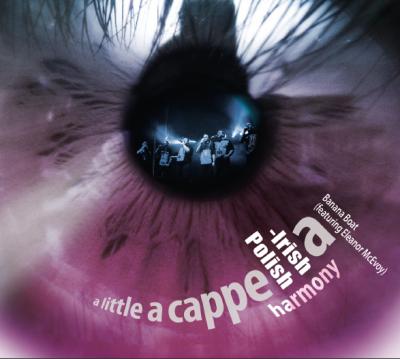 Just because an album is short doesn't mean I won't have a lot to say about it. But in the case of Banana Boat's A Little A Cappella: Polish-Irish Harmony featuring Eleanor McEvoy featuring a whopping two — count 'em two! — audio tracks, there really isn't that much to say.

Track 1 is Little Look which beseeches us to "take a little look at the race we've run, take a little look at how far we've come" and assures us that if we make amends and never take for granted our truest friends, then "with a little luck, we'll all be fine". It's a pleasant enough sentiment and a pleasant enough song but its arrangement, until the final 10% or so, is entirely block chords on "ooh" and "ahh", peppered with the occasional word echo or unison singing in harmony. Technically, it's a cappella, but since the group has made little to no effort to create anything but the most rudimentary supporting background "block", it comes off more as a vocal line that misplaced its instrumental backing track.

Ukraina fairs slightly better because its arrangement has just a smidge more texture, with a bass line of sorts and a few overlapping background lines that lend a bit of depth to the sound. It may also get the benefit of the doubt because it's offered up in Polish and absent any translation, it sounds a bit like a modern-day folk song, for which its still very simple arrangement might indeed be more apropos.

In case you haven't guessed, unless you're a fierce devotee of either Banana Boat or Eleanor McEvoy, you're not likely to pick up this CD. We know from its past work that Banana Boat is a talented ensemble with a tendency toward simplicity. We can now add brevity to their list as well. It may be the soul of wit, but it ain't a reason to buy this album.

Banana Boat CDs usually provide at least one surprise upon opening. Six grown men in banana suits? Christmas music in June? Santa in a banana sled? When I opened the latest from this Polish sextet and saw it was a collaboration with Eleanor McEvoy subtitled "Irish-Polish Harmony", I once again didn't know what to expect.

Turns out I was pleasantly surprised. A Little A Cappella manages to coherently blend elements from both these accomplished groups. The album features two tracks, both with McEvoy singing lead vocals and Banana Boat providing the block. The title track is a McEvoy composition previously featured on her 2006 release Out There, and Ukraina is a traditional Polish folk song. On both tracks the arrangements are simple, allowing the harmonies to do the work and allowing McEvoy to shine in the lead. While her great performance on Little Look was to be expected, she also manages to sound confident an and natural on the Polish-language Ukraina. Banana Boat's singing is adequate, but a bit too engineered to allow the group's exuberance to shine through.

The album also contains a music video for Little Look, which is well-made and touching. The images and lyrics highlight how music can bring people together, even Irish singer-songwriters and Polish a cappella sea shanty ensembles.

Banana Boat, a Polish a cappella sextet, has teamed up with Eleanor McEvoy, a highly acclaimed Irish contemporary singer/songwriter, to produce the commendable yet incredibly brief A Little A Cappella: A Polish-Irish Harmony.

The disc features two audio tracks, both of which feature Eleanor McEvoy fronting the vocal ensemble. The first piece, Little Look, is written by Ms. McEvoy herself, and has a nice, clean, contemporary Irish sound. The song is supported by a somewhat simple arrangement yet is performed solidly by the block, which blends nicely and displays considerable musicality. The second, Ukraina, is a traditional Polish piece. If you're looking for the latest contribution to the avant-garde a cappella scene, look elsewhere. These tracks are pleasant to listen to but fairly conservative in style. Oh, and for our American readers: none of it's in English.

The disc also features a video clip which is essentially a music video for Little Look. It's a neat addition, but even so, you can't help but feel that the disc is a little light in the "content" category.

As mentioned, Banana Boat produces a very nice sound. It would have been nice, however, to hear a bit more energy from the group. At only two tracks, you'd think that the enthusiasm would be through the roof to balance the lack of much material, but the sextet is content to just sound "pretty" and not much else. McEvoy, however, is a wonderful soloist. The unique quality of her voice suggests that she is a woman who has weathered many hardships and who is wiser for the experience. She draws you in and tells her stories beautifully.

In the end, this CD is meant to be a small but special project with a big-name songwriter. These songs probably would have been better served as an epilogue or bonus added on to their next big album, rather than producing a whole record with two songs and a music video. If you're a big fan of Eleanor McEvoy, it's probably worth a listen. But seriously, don't go too far out of your way to get your hands on it, and don't pay more than a few bucks for it. It's a nice listen, but it's over as soon as it starts.

The single is not for sale, but can be obtained for free at Banana Boat concerts.