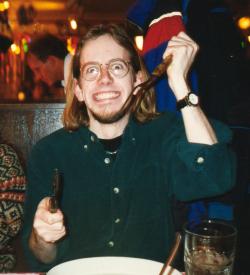 I grew up in the Kansas City area and began singing at an early age. After several years in various church choirs, high school brought me my first exposure to "small group a cappella", when I sang baritone in a barbershop quartet for three years (in addition to the usual choral regimen and musical theater).

In the fall of 1990 I went to Macalester College in St. Paul, Minnesota and immediately joined the Concert Choir and the 14-man group the Traditions. The Trads gave me a taste for vocal percussion, directing, and of course stage antics. I graduated from Mac in '94 (with a computer science major and a minor in vocal music) and continued to tour with a quartet which in time would evolve and become Four Shadow.

In recent years, Four Shadow has performed in over 30 states and is now a full-time living. Still in St. Paul (when not on the road) at age 27, I am currently the group's business manager and (since 1996) the Minnesota Ambassador for the Contemporary A Cappella Society. I have served as a RARB reviewer since 1997.

34 total reviews including 4 reviews from before May 1998, which predate our database and are not listed here.