A Cappella Worship: The Highest Glory (1998) 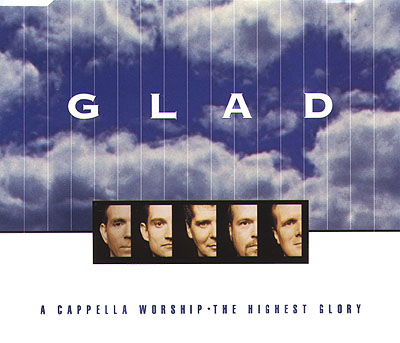 Do you like your other GLAD albums? If yes, you will like this. If not, don't go looking for surprises. This is not a crossover album, nor does it seem to be sporting too many new ideas. But it is chock full of impeccably performed music about Christianity.

To me, these songs all sounded the same, even more than previous GLAD albums. Oh, sure, I can tell them apart. But I don't have anything to say about any specific one, really. At times the lyrics do seem awfully earnest and sincere — one starts to wonder how many times you can sing "Our God is an awesome God" with a straight face. But then, one could easily say the same thing about phrases like "Baby, just give me one more chance" or just about any Elvis Presley song. Perhaps GLAD is the more believable after all.

This is the third GLAD album to be sent to RARB. It carries the same polish, sincerity and overall quality as the ones before it. It is clear the group put a lot of time and effort into the album to make sure it met their high standards.

But unlike A Cappella Gershwin or The A Cappella Project III, this album doesn't have much to offer those who are not devout Christians seeking explicitly laudatory music. It's still good — if this is the only GLAD you ever own, it might be a refreshing change of pace in your collection. It's got 11 all-new songs about one of the most popular celebrities of all time. For other new ideas, you'll have to look elsewhere.

Look out! Here comes GLAD! They have put together a new collection of songs singing praises to the Christian God.

If for some reason you have not heard (or heard of) GLAD, I think you should. This is a group that has been singing their unique style and sound of a cappella for years and years. They sing almost exclusively Christian songs of praise, (with occasional instrumental accompaniment) although they have strayed from that format from time to time, most notably in their album A Cappella Gershwin). One thing that has not changed is their signature sound. They have really tight harmony, and a sound that is augmented by some studio effects that beef up their sound and make it seem that there are more than the five of them. The effects also give them a sort of glistening, triumphant sort of ring/echo that I guess makes them sound more like an a cappella ensemble from "On High (TM)". One other thing that sets them apart is the fact that they take great songs that other people have written and skillfully arrange them to work for 5-part a cappella. That is thanks to group member Ed Nalle, the sort of ring-leader for the group.

The Highest Glory is is a brand new album from GLAD, and it does not disappoint. It is a typically sterling recording on their part. Their blend and musicality is right where it always is: perfect. The arrangements are again all top notch, and that patented GLAD sound is in full effect. If you can find something wrong with this album in its musical execution and production, you are REALLY nit picky and hear things that I can't.

There are a few songs that I think are really noteworthy for various reasons, including Gloria and Before The Throne Of God.

Chalk up for GLAD another musically tight and spiritually committed album. They have their own unique sound, and this one falls reliably into that formula. It's clean, tight, and potentially inspiring (if you're looking for that) and arguably one of their best albums yet.

May the Glory is a little choppy for my tastes, especially to open the CD. It does flesh out later into the arrangement and smoothes the sound a bit; maybe if I had this disc on shuffle play it would sit better with me. Plugged as the "hit single" from this CD, The Highest Glory uses drums and such to add to its marching triumph feel.

This recording features an unprecedented four tracks that aren't completely dominated by producer/director/founder/lead vocalist Ed Nalle. Not that Ed doesn't have a great powerful voice, but it sure is nice to hear from the other four guys in the group now and then. GLAD's impeccable blend over the years, I suspect, is largely due to the fact that Ed lays down a good 85% (probably a conservative estimate) of the tracks himself. John Gates does a nice job on Gloria and baritone Jim Bullard gets a couple nice tunes in also. New to the group is tenor Don Pardoe, who gets to shine on He Loves to Hear.

(Pre-release liner note typo — Awesome God is listed as copyright 1998, but I have flashbacks of doing this one in a contemporary church group somewhere about ten years ago. eek.)

There were a couple nice bass moments that struck me — not for originality of line or sheer power, but simply a beefy addition to the chords, balancing out the bright tenor sound and making for some nice lush moments — most notably in He is Exalted, By the Blood, More of You, and the very end of Shout to the Lord.

GLAD has been phenomenal for a long time, and this album continues in that tradition. If only secular music could maintain this sort of long-term energy and involvement, I think there would be some anti-conversions to a cappella!

True to form, GLAD's harmony and blend is superb. A new member does nothing to detract from the blend GLAD fans have grown used to. At the same time, there is something of a muted feel to most of the tracks on this album: while not low-energy, this is nothing to dance to (and obviously not intended for that). The sorts of arrangements GLAD performs are musically complex, drawing well on the range of voices shown by the singers, but with a high degree of homogeneity between them: it is clear that the arrangers know what the sound for this group should be like, and they toe the line. As such, the album as a whole tends to drag, but to skip from track to track now and again makes for a pleasurable listening experience.

As with previous albums, I wish that other members of the group would go for the solos once in a while (they stick to their "assigned seats" almost all of the time). GLAD might do well by branching out into some higher-energy tracks, although I would hesitate to suggest anything like VP or the like. For all religious music, there is a remarkable variety. A solid GLAD album, but not outstandingly different from what the group has done before.

This is an excellent gospel/Christian album. I will not entertain arguments to the contrary. The main purpose of the music set forth by this group now in its 22nd year is to praise God and glorify His name. Ardent Christian music fans will most certainly gravitate to GLAD's message.

General a cappella fans not accustomed to straightforward Christian music may be put off by the in-your-face message sent in this recording. If you as a music consumer will be offended by this, do not buy this album. It would be sad if that were the only reason, because there's a very good reason that this group has been around 22 years.

GLAD has transcended the need to constantly relearn how to produce a clean album that focuses on the message. As most professional groups should learn, the production was so clean, that I enjoyed the arrangements (some more than others) and the rich harmonies. There were no tuning errors, there was no question of blend or tempo. There were no flaws.

So, then, if I am so glowing about GLAD's ability to delivery crisp, clean performance, why do I even bother to score some tracks at a 4 instead of 5? The only way I can explain it is with the first two tracks.

May the Glory of the Lord is a highly hymn-like repetitive message. Very beautiful, but the repetition of that message did wear on me slightly. On the other hand Gloria had such an intertwining of voices and melody with a light percussion underneath it. The melody of the refrain sticks with me long after I turn off the CD. Personally, if I were to do the track order, I would have switched those two tracks. Gloria is, in my opinion, a far more friendly arrangement to draw listeners to the CD. GLAD may have used Glory to state unequivocally the message of the album. Regardless of that, the difference between a 4 and 5 on each track rested solely in the balance of the message and the delivery of the message via each track's arrangement.