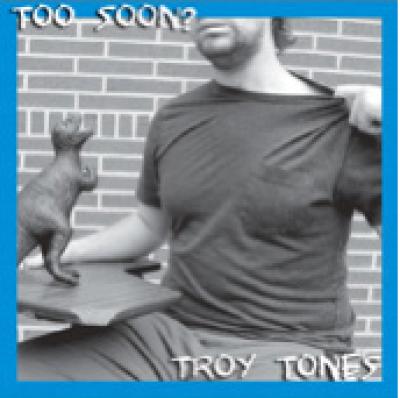 The USC Troy Tones instantly remind one of the excitement, energy and musical theater nerdiness of the hit TV series Glee. Soaring voices conjure images of dramatically outstretched arms and Disney-sized eyes. The Troy Tones aren't devoid of pop sensibility, but their brand is that of contemporary Broadway, even when their song choices are pop and classic rock. Consistently good production and leads ranging from good to excellent make Too Soon? an enjoyable listen. Unfortunately, several distracting choices mar the listening experience.

The Troy Tones' vocal percussionist is both notably better and notably worse than those found in most collegiate groups. For speed and dexterity, he receives high marks. Sixteenth and thirty-second notes make regular appearances in all his patterns, which is no small feat. Accuracy, drum sounds and tastefulness leave more to be desired. Too Soon?'s title acquires ironic impact with the veritable blitzkrieg of early attacks and constant fills. Although clearly a talented soloist, this VP appears to be in permanent solo mode. While lesser vocal percussionists might be capable of no more than simple kick-snare patterns, there are innumerable moments when I longed for just such an inferior percussionist. A great deal less would have added a great deal more. We Built This City, You Are Loved (Don't Give Up), I'd Do Anything, Teenage Dirtbag, (I Just) Died in Your Arms and Escape all suffer notably from percussion that just doesn't serve the song. While artistically unsuccessful, many of these patterns nonetheless display a high level of creativity and technique rare in collegiate a cappella. A better use of his talents would have been simplified patterns to support the songs and a few choice solo moments.

Like many collegiate groups, the Troy Tones employ some syllable choices in their arrangements which are slightly more comical than intended. However, when the arrangements reach homophony, the Troy Tones display a blend and richness of tone color that is truly excellent. In combination with their stellar leads, these moments mark Too Soon?'s high points. The disparity between these moments and the aforementioned less successful ones is significant. A few global changes could have drastically improved the Troy Tones' overall scores.

Once the distractions fall by the wayside, the Troy Tones shine. I look forward to a follow-up recording in which this exception becomes the rule.

An album titled Too Soon? just screams foreshadowing of an unpleasant listen. Add in the lackluster reviews of the Troytones' previous release, Goodnight!, and I was ready for the worst. Imagine my surprise when the latest from this co-ed group from USC turned out to be a great listen.

Collegiate albums are often mashups of styles, songs, arrangers, and producers that sound jumbled and disjointed. In contrast, Too Soon? has a quiet intensity linking all the tracks that makes it coherent and compelling. Much of the coherence can be traced to similar-feeling arrangements, almost all of which are penned by Matt Harkenrider and Andrew Abari. These arrangements are simple, straightforward, and get to the harmonic core of each song — though I can't decide if the numerous throwback syllable choices (e.g., "diddle-iddle-ee" on (I Just) Died in Your Arms; "jum-badda-jum-badda-jum-jing-jinngah" on I'd Do Anything) are charming or annoying.

The Troy Tones also display a unified, understated glamor with the backing vocals. I found the delicate texture of the tracks to be quite endearing. Rather than brash energy, fancy engineering, or pounding vocal percussion, Too Soon? relies on solid ensemble singing for a performance that is restrained, yet still moving. The producers did a good job of correcting most pitch issues while still offering a natural sound. Soloists sound earnest and unpretentious, complementing the sound well.

This sound works best on the quieter tracks. You Are Loved is fantastic, featuring an almost choral arrangement, a wonderful build to the climax at the end, and a beautiful solo. Breathe is another standout that features great synergy between the arrangement, the block and the soloist. My favorite track was Escape, which seamlessly weaves in some nice effects and percussion without disrupting the energy, and features an unbelievable solo from Dan Kuenzi.

Unfortunately, this delicate character doesn't always work in the Troy Tones' favor. We Built This City and Any Way You Want It sound like '80s rock-lite, lacking the intensity to sell the tracks. Teenage Dirtbag, with its tongue-in-cheek delivery and overly busy arrangement, felt out of place and disrupted the flow of the album. especially placed between the understated but beautiful Breathe and Foolish Games.

As any Top Chef watcher can tell you, solid-but-simple is back in fashion; you don't need exotic flavors or over-the-top presentation to make a good meal. Such is true of the Troy Tones, who at their best marry simple, heartfelt ingredients with the latest cooking techniques. Surely, it will take some experimentation to get the recipe just right, but in the meantime, there's enough ready-to-taste material on Too Soon? to satisfy most listeners.

If I had one piece of advice for the Troy Tones, it would be to stop being so literal. From the arrangements to their performance, this group sings as if every note were important, an approach that makes for a dense, complicated, and often overwhelming listen.

The word "overwhelming" might sound harsh, but it's the unfortunate fact for Too Soon?. I was aware of every single note in every arrangement — every flourish, every syllable choice, every everything. There's a soprano accent 30 seconds into (I Just) Died in Your Arms that sounds like "did-a-little-lee, did-a-little-lee, did-a-little-lee" that sticks out more than it should. It's just an accent, after all, not a second solo. But that's the problem that permeates both that song and the whole album: the listener is acutely aware of what every part is singing (both notes and syllables).

Part of this problem is arrangement style, and part of it is dynamics. These are all very note-heavy arrangements, and those notes don't always add to the song's overall feel. I wish they'd simplified (rather than transcribed) and given the backing voices a few moments of quiet here and there to let the songs breathe. As for dynamics, everything is performed at a constant mezzo-forte: these songs don't build or grow (or conversely, recede); they just sit. The percussive notes at the beginning of (I Just) Died in Your Arms all have the same weight; I wish they'd accented the first note in every group or built each chord change from a piano to a forte and then backed off when the soloist made his grand entrance.

Percussion falls into the same complexity trap. As in a traditional band, a percussionist's sole and primary job is to keep the rhythm, and the percussion here (especially on the more "rock" numbers: We Built This City, (I Just) Died in Your Arms, I'd Do Anything, etc.) just feels flashy and takes attention away from the rest of the group.

The Troy Tones rein in these issues on more melodic arrangements. You Are Loved (Don't Give Up) still has a lot going on in the background, but its tenderness and blend don't take away from the soloist. (Note: there's still an unnecessary counter-melody about halfway through, when the soloist sings "when darkness blinds you" and the backing lady singers chime in a different melody with lyrics about darkness and blinding. It's distracting, and the song would've flowed much better with just a crescendo chord.)

Similarly, Foolish Games has moments that are sublimely haunting. But then that chattering percussion chimes in and serves as a reminder that the Troy Tones really sound like a collection of individual singers, each doing his or her own thing on the song. Their biggest challenge going forward is to reign in their individuality and learn how to sound more like a cohesive whole.

(Namedropping note: the album was recorded and mixed by Christopher Given Harrison, who is currently a member of Sonos.)

To order this album, visit the group's web site, or find it on iTunes.