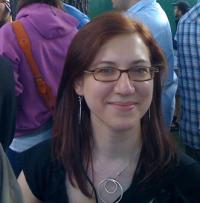 Catherine is a chemical engineer and a freelance writer based in Washington, DC. While her day job takes her to refineries in such glamorous locations as northern Alberta, Canada, her side job has allowed her to write about music for the better part of a decade. She was on staff at Pitchfork from 2001 until 2010, and she edited its debut book, The Pitchfork 500: Our Guide to the Greatest Songs from Punk to the Present, which was published in 2008. She also contributes regularly to The Washington Post, the Post's commuter publication Express, and Revolver, among others. She's also a frequently-published photographer.

Catherine contributes a segment called "Did You Know?" to the a cappella podcast Mouth off! (you can hear her musings on the unusual histories behind some of a cappella's favorite songs here, here, here, and here). She is a recovering singer who now spends her free time playing any one of a number of aluminum-necked guitars.

When not listening to, writing about, or creating music, she can be found knitting, running, or making jam. Notably absent from that list is sleeping. She is on Twitter at @autumnshades.