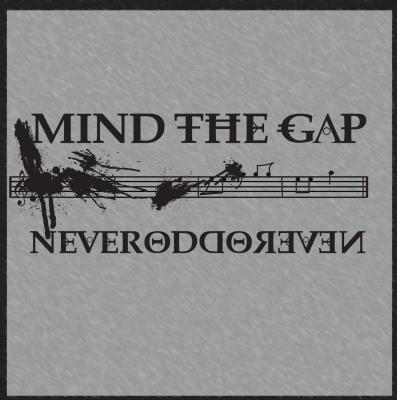 A great number of college groups find themselves trapped within the event horizon of karaoke black holes. Perhaps this should be called the non-event horizon. Song after song can sound like a pale imitation of the original. Thankfully, Mind the Gap sidesteps such a fate by adding just enough of their own interpretation to the lead deliveries, arrangements, and production choices to give Never Odd or Even its own independent and legitimate sound. Derivative? Sure. Mind the Gap rarely departs from the original enough to shock or surprise, but they often impress and, in little ways, they breathe new life into even the derivative.

Stylistically, Mind the Gap is a few degrees to the alt side of pop. This group isn't goth, but they do have a darker quality than most college groups. This leads them to songs with stories and even pathos. This makes for an infinitely more listenable album. When there's nothing to the songs, then all we can enjoy is the pure quality of the voices and the production, which is fine, but limited. But when singers become storytellers, a new world of appreciation is opened to the listener. Mind the Gap is such a group.

I found fault with the occasional distracting syllable. They really can spoil the mood of a song. (Dear world, "JennaJodoh" will not up your cool factor.) Also, from time to time, a lead is asked to do something beyond their comfort level: sing too high, sing with a beltier tone color, etc.. When we can hear that it's a stretch, something is lost. While most songs have great drive, many could benefit from stronger dynamics and broader changes in texture.

Nonetheless, I do recommend this album, especially to college groups who need some inspiration in how to take those first steps away from karaoke pop.

As far as palindromes go, Never Odd or Even is a pretty good one ... and Mind the Gap's album by that title is also pretty good in most respects.

Mind the Gap is a fifteen-member mixed group hailing from the University of Oregon. The group's Facebook page labels them as "alternative a cappella", and that's a fairly apt description of this album: many songs which you'd expect to find on an alternative radio station, packaged together in a cappella form — with perhaps a little more hard rock sound than you'd expect.

For the most part, Mind the Gap's music is very successful. There is a lot of energy on the album, obtained through driving beats, emotion from the soloists, and background parts which do more than just change chords on the beat. Male soloists outnumber the female soloists by six to three, and nearly all soloists deliver high quality performances.

Red Man is clearly the best track on the album, and one of my favorite a cappella tracks this year. Interestingly, part of what makes the song stand out is a production gimmick: a loud artificial-sounding melody (just tones, no words) enters and exits the piece from start until end, often dominating the singers (who are singing words) when it is present. In a good way. The tone is a bit reminiscent of the tones on the Bubs' Mr. Roboto from Code Red, which, as people should know, were not actually artificial, just voices with the start and end of the sounds muted; I don't know about the tones here.

Unfortunately, although a production element substantially helped the strongest song on the album, production elements substantially weaken many of the other songs. There are two main offenders. First, something went seriously wrong with the vocal percussion in about half of the tracks: the snare drum hits are extremely staticky. So much so, that in moments with a lot of VP, the static overwhelms everything else. It really detracted from my enjoyment of the album, and that alone caused me to downgrade a lot of the tracks from 4s to 3s. Secondly, in Bleeding Love, something is wrong with the lowest bass notes: they are very, very rumbly on my speaker system.

All in all, this is a pretty good album. However, there are not enough "wow!" moments to differentiate it from the rest of the collegiate a cappella world.

Mind the Gap didn't waste any time before churning out its first album — and didn't need to. Another shining example of how new collegiate groups are popping up like weeds and producing quality material, Never Odd or Even sounds like anything but a "first shot". Stellar soloists and high energy make this a great listen — especially from a new group — although their inexperience still shows in several key areas.

Let's get right to the heart of the matter: the soloists on this CD are kickass. Tim Neumann is the strongest, in my opinion; his rough-around-the-edges timbre is matched perfectly with the songs he fronts (The Freshmen, Move Along). Also noteworthy are the considerably well-paired harmonies of Alex Kihn-Stang and Adam Hayward in Zombie, and the gripping attitude of Taylor Duty in You Oughta Know.

Beyond the soloists, these tracks all provide the usual heartfelt emotion and energy of enthusiastic young groups. It's always great to hear a cappella music when you can tell the singers really care. Also, the percussion has achieved the rarely-heard balance of being rhythmically perfect while still sounding "real". Good stuff.

I must note that occasionally, the listener is reminded of this group's inexperience. The most notable issue with this album is the arranging. There are only three arrangers on the whole album, and a lot of the charts ain't that good. The whole first half of the album is comprised mostly of whole-note chords and one or two singers providing a bit of ornamentation. This gets old really fast. Let's always remember that the beauty of a cappella is the ability to mold songs in unique ways to fit the abilities (and limitations) of the human voice! The arranging does get a bit better in the second half of the record. Adam Hayward's arrangement of Bring It! is strong with its many textures, and the difference it makes is immediately apparent.

I also took some issue with the balance of the voice parts on Never Odd or Even. The tracks seem to be a bit heavy on the basses and the high sopranos, making the "meat" of the chords difficult to hear. And often, the solo is very hot in the mix. Achieving a better overall group balance will allow each part to better carry its weight and increase the effectiveness of the interplay between the soloist and the block.

All in all, though, I'm excited to see what's next for this fledging group of misfits. (Author's note: Who knows if they're actually misfits? I'm assuming they are, because they're more endearing that way.) Strong energy and exceptional solo work can go a long way towards making a solid album, and there's no better example than Never Odd or Even to prove it.