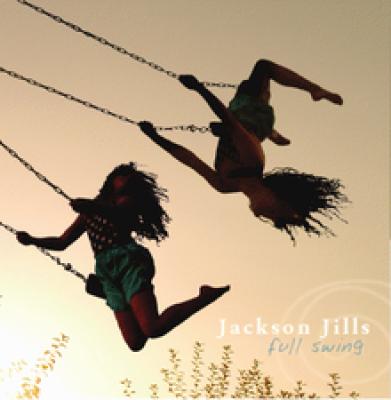 Ironically perhaps, for a women-only group, a fair amount of the credit must go to a gentleman: Ed Boyer, whom the group lovingly refers to as their "prodigio musicale". Now if the single biggest improvement to a group's recorded sound is the fellow who recorded and mixed the CD, and co-contributed the VP arrangements, that may seem like backhanded praise for the group itself. It's not intended that way, however, as the group also stepped up its game noticeably with this effort.

On the simplest level, Ed has given the group a consistent and anchoring low end. Even when it's not octavized, the placement and processing of the lowest altos creates a lush expansiveness to the Jackson Jills sound that hasn't been heard on one of their recordings this effectively in quite some time. As for the VP, the "spitting into a microphone" sounds of their last CD are blissfully a distant memory. It isn't overly flashy thankfully, but it's solid and consistent — not too much that it appears superhuman but not so human that it's entirely ineffective as it's been in the past.

But beyond the obvious tricks that any good, experienced studio engineer might use to enhance the sound of an all-female ensemble, using Ed behind the console has given the Jackson Jills a crispness and an intelligence to their overall sound that was sorely lacking before. The precise tracking, the tasteful use of auto-tune, the placement of the voice parts in the mix, the occasional dash of distortion or other effects: all of it makes for a thoroughly enjoyable and engaging aural experience.

To be fair, having a genius like Ed at the console and a new bag of tricks to play with is a bit of a double-edged sword for the Jills. On the faster tracks, the percussive syllables that might sound more spare and awkward if left relatively unmanipulated get an extra layer of imitative processing that lends an extra edge and a momentum to the rhythm section (on top of the sampled VP). The arranging isn't terribly imaginative, but what's there is made that much more effective and stylish by Ed's finishing touches that hide the imperfections. Still, there's only so much even Ed can do, and an ill-advised Destiny's Child Medley makes it abundantly clear just how much support is needed from him when the arranging is particularly rudimentary.

More instructive about the group's arranging weaknesses, however, are the slower, mellower selections where there are fewer bells and whistles to be added in post-production. There's nothing particularly wrong with White Houses, Not Ready to Make Nice and World on Fire, but there's also nothing particularly interesting about them either. They're extremely good recordings of mediocre arrangements of songs that are somewhat bland already. The Jills' energy — another meaningful asset that elevates even relatively simple arrangements of faster songs — can't help them on the slower repertoire and so the album lags quite a bit in these moments even though there is nothing particularly wrong with them.

As for the future, the Jills have taken a big step forward. Now that they have all of the tech stuff worked out, I'd love to see them dive into the music itself a bit more and bring it with the creativity and artistry as much as they've brought it here with the technological gadgetry.

Palpable from the first beat of Everybody's Fool is the determination that the ladies of Tufts University's Jackson Jills are ready to reclaim the throne as the queens of collegiate a cappella. It's taken awhile for them to get back on track, as the album is a mix of Jills recordings from as far back as 2005. With a result this stellar, it was worth the wait — though it does explain the incongruity of the 2005-2006 Destiny's Child Medley with the rest of the album. The power and passion is evident, but it's much more subdued and the arrangement isn't as well-executed as the in-your-faceness of the rest of the album.

The album is comprised of a little pop, a little rock, some country and a dash of hip hop in a recipe of a cappella goodness. It's a taste that can please everyone. And it does. The arrangements are top of the line, the musicality of the group is ever-present and the soloists give one commanding performance after the other.

Everybody's Fool rocks it out from the start with amazing force in the rhythmic alto section. But it's the stratospheric sopranos that really jump out at you and grab your attention. And not in that piercingly shrieking way. No, there is a restraint that allows them to float over the dirty rock to create this angelic, sonic atmosphere. Truly, it's just a background part, but their long, breathless phrases completed this track. I'm not what you would call an Evanescence fan, but this track made me reconsider my dislike.

The rock continues with Who Knew, though the beginning isn't as energetic or engaging as the opening track. The chorus pummels you though, and then we're treated to the raw passion that is Paramore's trademark song Misery Business. If this is the Jills at their most miserable, no one could survive a euphoric onslaught. Their take on the Dixie Chicks' rebellious anthem Not Ready to Make Nice just reinforces the power positive theme of this recording.

My favorite track by far is Pump It. Here we see "1% lip buzzing, tongue trilling and water gurgling" at full effect. The first time I heard the arrangement my mouth went agape in stupefaction. The umpteenth listening experience still mesmerizes me. Love it. Love the Jills for doing it. Love the track because it is just stank. Not the stankest female hip hop (um Divisi and Out of the Blue have that on lock), but up there with the all time greats regardless of gender (including two of my faves: the Bubs' Pony and Binghamton Crosbys' Supafunk). Listen to it on repeat at 10 when you need to be energized for the week ahead.

As the liner notes to their latest recording effort Full Swing attests, the album is more than a compilation of their most recent songs but an "anthem of our refocus, drive, and renewed dedication to show exactly who we are no holds barred." The energy and excitement crackles and sparkles on track after track. The Jills are definitely in full swing, singing with gusto and bravado that infuses the heart with as much joy as it does the ears.

"[Thanks to] every woman who has sung before us, paving the way for the Jills to be more than just a traveling minstrel show." — Full Swing liner notes

Well, the Jackson Jills are certainly more than a traveling minstrel show now! This fifteen-sixteen woman group sings with energy and attitude, delivering enjoyable performances within their chosen "rock a cappella" sub-genre. Their overall arranging style is similar to most other female collegiate groups: a soloist, duet/trio parts at times, frequently one or two quiet parts above the solo, and the altos filling in the bulk of the chords on the bottom. What sets the Jills apart from the crowd is their rock emphasis, which makes itself felt through several aspects of the performances.

First, there's the omnipresent vocal percussion, which ranges from maintaining a steady drum beat to kicking it up a notch to take the foreground in many of the loudest sections. The VP sounds have been tampered with enough to make the Jills sound like they have a full drum kit accompanying them.

Secondly, they use periodic production effects to provide sounds beyond the human voice: for example, distorted electric guitars are heard in the lowest voices of many of the songs, along with other instruments on occasion. I feel these are well employed — enough to make the Jills sound like a rock band, but not too much to hide the inner a cappella-ness of the music.

Third, there's attitude from the vocal parts, with the tone being set in large part by the soloists. Among the soloists, Hillary Cohen is the one that really stood out to me. In Misery Business, she delivers a sassy performance, properly telling the listener a story as she sings nearly the whole song at full volume. In Not Ready to Make Nice, she does a similarly nice job delivering the message of the words, albeit on a more subdued level. But I thought her shining moment was in Pump It, where she sounds simply fantastic on the brief "Loh-dah-dee-dat-dat dee dai on the steree-eree-eree-ereo" section towards the end of the song. Hot! I would have been happy listening to her go on like that for an entire song. (Disclaimer: since there are three soloists listed for this song, I'm not 100% certain this particular soloist is Hillary; if it's a different singer, I apologize and take my hat off to her.) The other notable soloist is Mimi Taskier, who performs on Only One. What really stands out is her great range: emotional and dynamic, not just pitch. She goes from the big, huge sound on the chorus ("Here I go, scream my lungs out and try to get to you"), down to one of the most intimate parts of the entire album ("Here I go, so dishonestly, leave a note for you my only one"), back to screaming her lungs out, without missing a beat.

Unfortunately, although there are many good things about Full Swing, in the end I find it a bit unfulfilling. There are a couple of instances where the soloists don't quite lock. The overall sound is not as rich as it could have been. There are a couple of songs that have very abrupt endings. The Dixie Chicks' song Not Ready to Make Nice seems out of place following directly after super intense Pump It. There aren't many moments of real intimacy or connection with the listener.

That said, there are also plenty of nice moments in the album. I've mentioned some above. Another that kind of epitomizes the album as a whole occurs in Pump It, where a singer screams "Louder!" repeatedly at the top of her lungs in the background (faintly; the volume of her part had been greatly reduced). It is so over the top that it kind of cracks me up, but probably is the right instruction for what to do with this album: relax, enjoy, and play it louder.