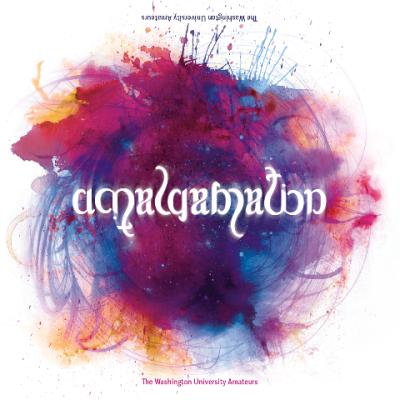 Amalgamation starts out with some flair, but by the time it reaches its Happy Ending, you'll probably feel indifferent about the album. There are some nice moments, but it's largely an album of issues without much excitement.

My most common note while listening to Amalgamation: "Alright, but boring." Emotional Roller Coaster tries to be sleek, but it drags and feels uninspired. The Scientist is usually a safe bet for a cappella, but there's just not much intensity in this version, despite how the original offers natural spots to build and burst through. Renegade should be brilliantly fiery and urgent, because the hangman is coming down from the gallows, for heck's sake. But The Amateurs don't seem concerned about this. Everlong is an example of what my old group would call a "gig song": easy to memorize, easy to sing because of the compact range, easy to bust out at a moment's notice. The arrangement needs more for an album that can be played back, though. Then there's another version of Before He Cheats that doesn't hold water to the sharply sassy original. Basically, there's just not a lot to sink your teeth into on Amalgamation.

Soloists are an issue, too. Most are mediocre, some are below or questionable. The soloist on Don't Speak isn't capturing the same Latin feel her group is portraying behind her. Plus the guitar solo on Don't Speak sounds loud and odd, really taking the listener out of the song. Conversely, the soloist on All Time Love is too soft and gentle, and doesn't bring enough gusto to carry the work to the needed emotional heights. Some soloist swapping among tracks on this album could have improved the overall outcome. Time to be more critical during soloist auditions.

There are two pieces, however, that spark some serious interest. Mercy is fabulous and fun, and if The Amateurs could bring this kind of feel to all of their singing, they'd have my attention. Falling Slowly is also quite nice. It's wonderful to hear all the parts so clearly in an arrangement, and with such meaningful singing. The Amateurs are obviously connecting with this song, which is well penned and well mixed.

Here's hoping for more caffeine and more bold choices for the next go-around. More zing, more life, more of the unexpected, more to get excited about!

Amalgamation, the latest release from the University of Washington Amateurs, is an average collegiate album. In 2010, that's essentially a compliment. An "average" album these days is in tune, well-sung, features decent arranging and vocal percussion, and has soloists who sing with power and energy. Amalgamation has all of these things: good things to be sure, and worthy of praise. What it lacks is anything new, surprising, or particularly creative. These days if you want to get ahead, you have to do more than sing pretty.

To their credit, The Amateurs do sing mighty pretty. Right off the bat, Mercy bounces along with a sultry smoothness that fits the track well. The solo is peppy, if a little angular, but certainly above average. The Scientist similarly succeeds with a simple heartfelt delivery that opens up into something more complex as it progresses. Hats off to The Amateurs for capturing the spirit of much of their music.

Perhaps the biggest problem is the music itself. If you've listened to a cappella lately, you've heard these songs many times. Heartfelt though it is, I've heard and seen many similar versions of The Scientist. Ditto for Falling Slowly (Hyannis Sound's version is the one to beat right now), Everlong, Don't Speak, Criminal, and Renegade. All of these songs are presented well, but also more or less as you would expect them to sound. There's nothing engaging to make you come back for a second listen. At least Gone wasn't the Ben Folds one — that was a pleasant surprise.

So what now for The Amateurs? Get creative! This group has a strong sound and clear talent, now they just need to use it to better effect. Considering bringing in an outside producer who is familiar with contemporary a cappella to offer a different perspective. Listen to other groups and "borrow" some of their creative ideas, then morph them into something uniquely you. Perhaps then these Amateurs will progress to something a little more professional. Sorry, couldn't resist.

The Amateurs are a fun group that bop right out of the album case with Duffy's Mercy in the opening track. Carefree and musically solid here, there's nothing to dislike. Lindsay Keller is the epitome of a soloist letting their hair down and this sets the tone for Amalgamation.

The Amateurs are ahead of the curve in many areas. Just listen to the backing tracks crescendo and decrescendo over short musical phrases on Today. This should be standard fare on a collegiate album, but it's missing more than it's present these days. It really helps to shape the emotional arc of pop songs. Syllable choice on Falling Slowly helps a song that could easily crash-and-burn with most collegiate groups (due to the repetitive nature of the song) succeed and soar, capturing the listener's interest from beginning to end.

However, The Amateurs are lacking in a few other areas. The group needs a little more snarl in their sound, as evidenced by their lackluster attacks at the opening of Before He Cheats. This song could benefit from bringing the soloist more forward in the mix. It just comes across as lacking the primal emotion needed to pull this Carrie Underwood song off.

Don't Speak experiences similar energy issues, and it could be helped by a more interesting arranging style on the chorus to help bring the energy out. The arranging is a little too smooth jazz here (they even throw an improv solo over the bridge). Although I appreciate the effort to change things up a bit, the punch of the original is lost. The fade-out at the end doesn't help either.

I was skeptical of the soprano soloist on All Time Love, but Mary Rosamond really sells the song as her voice gracefully floats above the tender musings of the block, all the while tugging at your heartstrings. Fantastic track showcasing what the group does best.

Lindsay Keller is back on Criminal and helps the group create some energy with her needed in-your-face solo on this Fiona Apple song. The distortion over the block is a nice touch here.

The rest of Amalgamation continues with a trend of ballads that are emotionally draining, mid-tempo pop tunes that are fun, and songs that should pack more energy than they do. The Amateurs really shine on songs that allow the full span of their musical wings to spread out. If they can find a way to bring more snarl on the harder-hitting tracks (or drop them altogether), they'd have an album worth talking about. Until then, this is a nice release for fans of the group and arrangers looking for ways to bring more emotion into their ballads. The Amateurs still have another level to rise to.