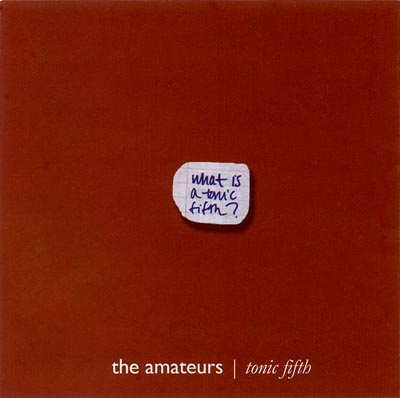 The Amateurs of Washington University in St. Louis are certainly not (amateurs, that is), but that's only the beginning of their identity crisis.

Tonic Fifth, The Amateurs' second album, features an eclectic mix of covers which span the musical spectrum from pop and rock to jazz and pseudo-folk, with even a touch of country and Broadway thrown in for good measure. As such, it's an enjoyable if wildly inconsistent effort, perhaps proving once again that very few groups can sing "anything".

I'm guessing here, but it would seem as though The Amateurs' primary repertoire focus, as is the case for the majority of collegiate a cappella groups, is in popular music with a pop/rock/alternative feel. What's so troublesome for me then, in listening to their album, is that my favorite moments come in the aberrations, the songs which are very much atypical choices for a group of this kind.

Witness The Amateurs' take on Minnie the Moocher, the Cab Calloway classic as re-done by Big Bad Voodoo Daddy: a spot-on solo, smooth jazz background and a great "feel" overall make this track my absolute fave. Once again venturing into vocal jazz, Moxy Früvous' Spiderman is another fun, hip arrangement with just the right bit of zaniness added by Eric Compton's solo. And how about When We Grow Up from Free to Be You and Me? Even with my background in theater, I generally shudder when I see show tunes on the back covers of a cappella albums. But with a lovely arrangement by alumnus David Cohen and a sweet solo by Emily Barr, once again The Amateurs surprised me with a full, sweet, polished rendition of a childhood classic.

Would that surprise was the only emotion I felt listening to some of the more mainstream selections on Tonic Fifth. Feelin' Groovy made me feel anything but, with a belting duet (especially the upper part) sapping the song of its easy-going, mellow, care-free feel. Peter Gabriel's Solsbury Hill has proven a difficult choice for groups in the past, and here is no different, with an arrangement that feels only half completed. And finally, why oh why does the world need one more In the Still of the Night — especially one which, despite Joshua Goldwasser's vocal acrobatics on the solo, comes off as squarely as this one? (Note to the liner notes editor: Just as Parton, Harris & Ronstadt covered Neil Young's After the Goldrush, and Big Bad Voodoo Daddy covered Cab Calloway, Boys II Men was not the first to perform In the Still of the Night. The Five Satins (and later, Santo & Johnny, and Paul Anka) had them beat by a few decades.)

It should be noted that Tonic Fifth features two incarnations of The Amateurs: the 1998-1999 ensemble, which featured 14 singers and is heard on seven tracks, and the 1999-2000 version featuring 17 singers which is heard on the remaining eight. Whether it is the addition of the extra three voices, or simply a sophistication and maturity that took time to develop, it is the more recent Amateurs who provide the best of what this album has to offer. Now if only they would realize that what they likely want to sing the least, they actually sing the best, I'd be first on line for their next album.

On their debut album, The Washington University Amateurs showed lots of promise despite the fact that their album was deeply flawed. Their second effort, Tonic Fifth, is a huge step forward for the group. They've worked a lot on some of their major problems (such as timid and nervous soloists). The encouraging thing about the group's improvements is that they didn't throw the baby out with the bath water. They made sure to hold on to the things that made them special, namely fresh song choices arranged and performed with a quaint innocence.

The track list on Tonic Fifth is full of songs that are either somewhat obscure or extremely rarely covered. The song selections are very creative, with the exception of the doo-wop classic In The Still of The Night and the two songs they're borrowing from Moxy Früvous (both of which are, in one way or another, covers of other people's songs to begin with. Lately it seems college groups have been raiding the Moxy Früvous catalogue the way college groups used to raid The Bobs.).

The arrangements on Tonic Fifth are sometimes simple and usually friendly. This is modern a cappella to be sure, but it's still got a glee club attitude. The soloists are generally strong, but what will probably catch your ear is the way The Amateurs use duets and trios on the some of the lead vocals. Songs like the Indigo Girls' Let It Be Me and Simon and Garfunkel's Feelin' Groovy naturally feature tight harmonies on the lead vocals, but you'll be surprised by the shimmering harmonies on the main vocal line of Neil Young's After the Gold Rush.

Despite the group's growth since their last album, The Amateurs still drop the ball on a handful of tracks. Feelin' Groovy may boast an easygoing interpretation of the main vocals, but the backing vocals are so washed out that it's hard to get the feel-good vibe the song should deliver. Similarly, the backing vocals in their version of Peter Gabriel's Solsbury Hill lack the energy it takes to sell a song whose hook consists of the words "Boom! Boom! Boom!". The Amateurs' version of Cab Callaway's scat classic Minnie The Moocher is lifeless compared to the original. The understated but confidently sung scat section of I've Got To Get a Message to You puts Minnie the Moocher to shame. Even on the good tracks of this album, the energy level of the performances is a bit low. It's a laid-back album by design, and it works to a degree. Only Life of Riley, Wide Open Spaces, and Rain have any real drive. While I wouldn't want to see The Amateurs surrender their relaxed sound, one or two more tracks like Riley and Rain would really have helped turn Tonic Fifth into a well rounded album.

I think it's really important for a group called "The Amateurs" to demonstrate that they're not. Unfortunately, this album doesn't do it.

Their choice of music is quite good, interesting and varied, and the arrangements overall are well done. However, on several songs the solo voices just aren't up to the task, and there are some balance, blending and tuning problems.

The singers are clearly trying to imitate the tone and vocal quality of the original artists, but all too often fall short. I feel they would have done better to sing these songs in their own voices, working with their personal vocal strengths, instead of trying to live up to someone else's. Most noticeable is Wide Open Spaces, originally by the Dixie Chicks, where the soloist Lauren ends up sounding harsh and forced, and not pleasant to listen to.

In sharp contrast is Minnie the Moocher. The backing vocals could tidy up a little in places, but the lead vocalist Andrew McDiarmid carries this song off beautifully with a smooth, smoky tone that suits this song perfectly.

In the Still of the Night comes across well, although the arrangement is nothing out of the ordinary. I liked When We Grow Up, perhaps a more unusual choice, but the voices were well produced and blended, making it very pleasant to listen to.

Gotta Get a Message to You had some nasty tuning problems in the key change, and a weak ending. Ouch!

However, The Amateurs get an instant reprieve with the next song, Spiderman, which was my very favorite track on this album. Well sung, catchy, humourous, lots of fun to listen to. It's a shame that it's so far down the track listing — with some of the weaker tracks preceding it, there is a danger that some listeners won't get that far!

This group would do better to drop a couple of the weaker tracks and reorder the remaining tracks to start and finish with stronger numbers, creating a better overall impression.

The Amateurs' Tonic Fifth is neither outstanding nor terrible, just sort of average, with its fair share of nice moments and hiccups.

For current ordering information, send email to The Amateurs at amateurs@restech.wustl.edu.