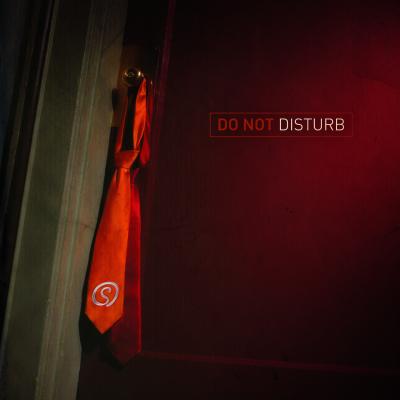 It has a rather ordinary start, but Do Not Disturb becomes a compelling, heartfelt offering around the mid-album mark on its jaunt to a giddy finish. Had this album been an EP from track five on, the consistency and enjoyment levels would have been very commendable. As it stands, it's still good a cappella and will delight many listeners.

Apparently all the male collegiate groups had a caucus and decided that the proper way to start an album means rolling out a slickly engineered, dance-party-in-a-frat-house kinda song. Sometimes it's Kayne, sometimes it's Usher, this time it's the ever-reliable Justin Timberlake with Lovestoned. It's good but quite predictable and offers nothing new. Moving along, Would You Go With Me is just barely within this soloist's range, and who decided totally unrelated Africa needed to be thrown into the arrangement? Talk about nothing new! Africa? Really? There's just too much song-throwing in collegiate a cappella these days. Can't a nice original just stand on its own anymore? If not, shouldn't the arranger be working a little harder to make it so? Let's crack this addiction and use kitsch with care. Maybe collegiate groups should caucus about this, too.

As I mentioned, things don't get solidly underway until track five with Doubting Thomas. It's sensitively sung, and the group sounds focused and strong. From here on, it's like the mailman brings you a huge package full of nothing but exciting gifts from your favorite store. Quality tunes, great singing and arranging, and contagious energy really makes the latter half of Do Not Disturb very memorable. There's also some very wonderful mixing on two emo numbers, Keane's Bend and Break and Edwin McCain's Shooting Stars, adding great depth and captivation. (Bonus: there are appropriate mix-ins of McCain's I'll Be on Shooting Stars.) And if you're looking for some feel-good music, the guys deliver it on a platter with spunky Life Is a Highway and silly Spice Up Your Pop. I admit, I re-listened to Spice Up Your Pop immediately after it ended. And then a third time. You might, too.

For me, Do Not Disturb feels like two albums in one. However, the second album is so good that it makes the lesser first album excusable. If these guys can judicially edit and tweak to produce a fully high-quality album, holy smokes. Holy smokes, I tell you.

Humming along on good arrangements, better soloists, and danceable energy, the men of Outspoken have turned in a release to be proud of. Save for a few weak moments, Do Not Disturb is a pretty excellent listen. Though they don't break the mold, these men find exactly their place in it, allowing personality and unique strengths to bubble to the surface.

It's not often I comment on vocal percussion, since these days it's usually sliced and diced to the point where no one individual can be credited for its success, but I have to give some love to Kenny Lowe, Jr., for turning in some really exceptional, groovy beats. To be sure, the studio is his friend, but the sequencing and effects serve here to elevate rather than artificially enhance his sounds. When I say that you can dance to this album, I mean it, and it's in large part due to the accuracy and awesome treatment of the drums. Nice work.

Tom Anderson's arrangements are predictably excellent, featuring expert layering both rhythmically and harmonically, and an effective dose of humor (the Africa interpolation in Would You Go With Me made me laugh out loud). Several group members turn in arrangements as well, and they generally hold their own, the biggest difference being increased repetition and decreased rhythmic drive.

Solo-wise I enjoyed Kyle Gilham's turn on Keane's Bend and Break (though the arrangement leaves him a little exposed at times), and Joshua Seitz's electric grit on Linkin Park's Breaking the Habit. I really wanted to enjoy Joshua's excellent tone on Life Is a Highway (a complete 180 stylistically, just one track later!) but his nagging flatness on the chorus high notes kept me from really getting into it. The slide toward Ab kept those F Major arrivals from really landing the way I was hoping for.

Do Not Disturb paints Outspoken as a fun, energetic, have-a-good-time kind of group. I'm guessing their fans are more than happy with this album, and should you choose to check it out, you probably will be too. It may not be anything new for you, but it's hard to hate on a group so clearly having fun! Keep pushing the creativity of your arrangements, guys, and next time will be even better.

Outspoken is an all-male group from Oregon State University that generally has a good energy, good blend, and good soloists. All that combines to make Do Not Disturb a solid album with a pleasant, rich sound.

That said, there are two things at which Outspoken could improve: dynamics and arrangements. Most of Do Not Disturb felt like it was at a constant mezzo forte. I wanted to hear some quieter moments and some big powerful crescendos growing into a song's climax. Fields of Gold could have induced goosebumps with more dynamics in each phrase. Similarly, Doubting Thomas is just begging for softer backing voices, if only to let Joshua Seitz's gorgeous solo voice shine through. And while the group does sort of achieve some volume changes on Breaking the Habit, the builds are created more by changing the arrangement than by singing at different volumes.

Now, about those arrangements: there is a lot going on here. Would You Go With Me propels forward so quickly that I was wondering how those singers were moving their mouths fast enough to keep up with the song. There is a lot to be said for letting a song breathe a little bit, either by creating some spaces between the notes or just slowing the song down a smidge. Having a lot going on in an arrangement can work well in a ballad. Outspoken's arrangement of Shooting Stars really moves forward where a simpler arrangement would have dragged, but there's a fine line between an arrangement with momentum and an arrangement that sounds busy. A lot on Do Not Disturb falls into that latter category.

One final note on arrangements: Outspoken has a tendency of weaving in a related song as a countermelody (either another song with a similar theme or one by the same artist). These are in general handled quite well on Do Not Disturb, with no awkward transitions; the only problem is that they do it so often that it stops being a surprise. My favorite of such moments is on Would You Go With Me, where the group throws in a super-speedy version of Africa as a bridge. It works well, though, and it's fun to hear a common aca tune done in a different way.

All this criticism overlooks the solid foundation that Outspoken has built. Soloists here are generally well-suited for their songs, and there are some really nice pulsing phrases on Go the Distance that make the song move and sway. Spice Up Your Pop is a fun medley/mash-up that closes the album. Do Not Disturb is a solid listen, and there's a lot that these guys do well, but it's hard not to notice the things that could've made this album even stronger.