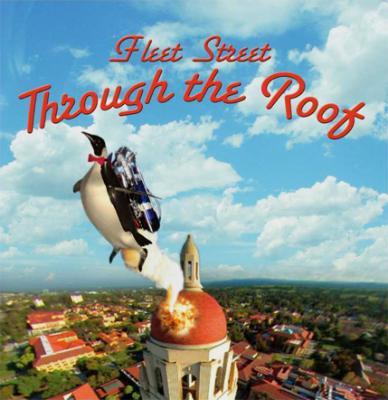 My heart is confused. Ten of the twelve tracks on Through the Roof are originals. How completely amazing! But the two standards, Straighten Up and Fly Right and Blackbird, are so great that I want to hear more, well, standards from Fleet Street. And yet, why not go all the way and have another album of originals, like their last self-titled album Fleet Street which garnered so much praise?

But after meeting a man who puts the "man in manicure", learning about weird honey sandwich friends, hearing the tale of an unlikely affair in the desert, encountering a demon in the library, and a bunch of other impossibly creative, totally bizarre scenarios, I'm not confused about Fleet Street's creativity: these guys are brilliantly nuts.

I think the reason why I favor the two standards a little bit more than the rest of the musical mayhem is largely because of the accessibility difficulties in the originals. Many of them are quite long. (Do we need nearly six minutes about cartoons?) There's a lot of talking. There's a lot of talking in character. Some of the stories take really winding turns. It's hard to focus on the music when there's so much otherness going on. Basically, I think it all goes back to the "sometimes less is more" mantra. One of the biggest head-spinners is The Golden Rules, full of different musical styles, covers of other songs, and mouthfuls of lyrics.

However, there's also a piece on Through the Roof that is so creative that it's easy to forgive all the stuff Fleet Street heaves our way. Greatest Hits of the 1600s takes popular tunes and gives them, well, an extremely retro treatment. You know, rather secular choral music style. My life wasn't complete until I heard Single Maidens (Put a Ring On It). Oh my lambs.

Another area of interest, if not confusion. This album features singers from 2004-2010. They didn't want to switch out those two standards for two more originals in all that time? Sorry, I can't stop pondering this decision, even though I'm so in love with the two that made the cut.

Basically, there's actual musical genius on Through the Roof. But there are also a lot of moments that may be just too darn weird for the masses to enjoy. At any rate, it's worth a listen.

If you're only familiar with the Fleet Street Singers by reputation, the level of silliness and fun that pervades this album probably won't surprise you. What may catch you off guard is the originality and craftsmanship with which they put together their (mostly) original (!) track list. Sure, sometimes these guys go for the obvious joke, but more often they pleasantly surprise with clever wordplay, effective arranging, and genuine humor. College groups, take note (men, I'm looking at you in particular): This is what goofy fun sounds like done really, really well.

Let's break down why this album works. It works because the humor is distinctly collegiate, yet generally tactful and handled with a certain level of lyrical grace. For example, the topic of metrosexuality may be an easy target, but taking aim with above average lyrical parings like "You're metrosexual with a friendly smile, metrosexual with impeccable style, and it's acceptable every once in a while" gets you good marks in my book. We're out of the typical realm of bathroom humor here.

Actually, we're not, but the bathroom humor is some of my favorite material on this album. The Golden Rules (the guys' urinal etiquette lesson) is on repeat for me because it's such an effective, exuberant style parody. Ditto for Demon of the South Stacks, which draws on Western clichés to excellent effect. In both cases the arrangements do such perfect justice to the style being lampooned that they automatically elevate the song above gimmickry.

Have you noticed the pattern yet? The gentlemen of Fleet Street use the music to elevate their humor, not the other way around. Too often groups (both live and recorded) rely on cheap shots and cheesiness to distract from weaknesses in their sound. Take away the humor and Fleet Street still sounds good. Add an extra level of insight and (dare I say) artistry to said humor and this group is in a class all its own. You want proof? Listen to the covers Straighten Up and Fly Right and Blackbird. Both well sung and interestingly arranged.

Though I found certain songs to be wittier than others (hence the slight score disparity), I have to applaud these men for an excellent album that shows all the fun of collegiate singing with the musicality to match. By challenging themselves to be original, to go beyond the easy joke, and to make genuinely good music, the Fleet Street Singers Singers have secured their place as the brightest, funniest college singers I've heard.

I have a confession to make: I don't like humor a cappella. With a few exceptions, I find it grating and juvenile and heavily reliant on inside jokes. It seems that neither musicality nor high-quality humor are featured and it all goes down as being mind-numbingly mediocre. With my anti-laughter agenda clearly displayed, I can go ahead with reviewing the latest from Stanford's Fleet Street Singers, Through the Roof.

The Fleet Street Singers are both musically talented and funny, which helps their case enormously. The tuning and blend are professional-quality, with the voices still sounding like humans. The soloists are almost all excellent. The production certainly needs to be given its props — this is a fantastic-sounding album. The bass sounds dynamic and interesting, the pads are mixed to perfection, the soloists drift over the backgrounds with clarity and precision. Even in the busier arrangements, the vocal parts are clearly defined.

It's very common to hear the lament that there is not enough original material in a cappella, but here is an album that is over half original songs. For the most part, these new tunes are great: Metrosexual features some clever lyrics and is a great pop song to boot, The Friendship Song builds to a humorous climax, I Grew Up on the Fleet Streets is a blast to listen to, and The Golden Rules is as original and fun a song as I've heard on an a cappella album. The other two originals, College and Demon of South Stacks, are both cute songs, but they're not as impressive lyrically or musically.

Arranging is strong overall. Blackbird benefits from a lush re-imagining that showcases the group's solid tuning. Toonz, which could have been an insufferable piece of nostalgia, benefits from some good medley-writing skills and pays homage to two decades of excellent Saturday morning programming. On the other side, Straighten Up and Fly Right could use a paring down of parts, as there is simply too much going on. The syllables are overbearing as well — how about a more straight-ahead vocal jazz treatment? Syllables are a problem on several other tunes as well — College features an annoying recurring "dum be dwee dop" line and Toonz features some head scratchers as well.

So after Through the Roof, will I run out to the nearest store to buy all the humor a cappella I've been missing out on? Probably not. I still roll my eyes whenever a coy inside joke or dumb crack comes up. But I will keep listening to the Fleet Street Singers, who have found the balance between musicality and clever writing to make a charming and enjoyable listen even for a killjoy like myself.