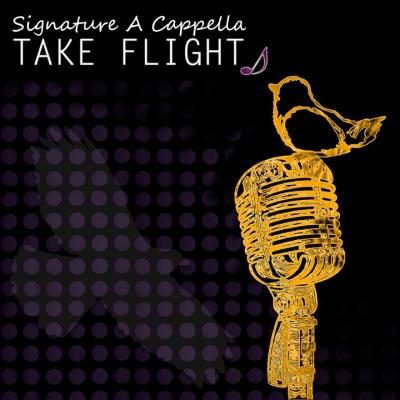 The ladies of UCLA's Signature A Cappella got a little overzealous on their debut album Take Flight. Around these parts, we often talk in terms of, "If you like modern a cappella..."/"If you like throwback a cappella..."/"If you're a purist a cappella listener..." Signature A Cappella covers all of this sacred ground here with more styles than you can shake a stick at. There are also fifteen tracks presented, but given how many songs make an appearance within tracks and the vast amount of artists showing up for a spat throughout Take Flight, we're dealing with a huge amount of material here. By the final note, it just feels like way too much. There's really no "signature" sound, no clear identity; there's just a whole lot of everything.

If you can get past the slightly annoying, standard roll call opener whereupon the ladies introduce themselves and their talents à la Gettin' Jiggy Wit' It, odds are something will catch your ear on Take Flight. For me, it was first the pleasant journey of You Belong With Me, a song that only grows stronger and more beautiful as it unfolds. But the track that really sold me on the potential for Signature A Cappella's recording adventures was Heart of the Matter. What kick, what drive, what emotion! The soloist is so heartfelt that you feel like raising up an "Amen, sister!" at the song's conclusion. Even Party in the U.S.A. was a good listen, proving that a group doesn't have to slap all the lighthearted fun out of its lineup to be successful.

Having an overarching theme for an album always helps the focus, but it certainly isn't necessary. Signature A Cappella merely needs to bring their lively spirit to a smaller collection of thoughtfully selected pieces, ones that can stand on their own without a barrage of mix-ins. If the vocals are there, and they are, there's no need to present the world's songbook.

Looking forward to the next round, ladies.

Take Flight is an impressive debut album from the ladies of UCLA's Signature a cappella. The final product reveals a good attention to detail and an awareness of contemporary a cappella recording techniques, both of which bode extremely well for the future of this group. While this is a fantastic, well thought out first step, Take Flight definitely shows this group's youth. Listen, and you will hear a talented group still (understandably) searching for its identity.

The Signatures have kindly included a wealth of revealing information in their liner notes, so allow me to use that as a jumping off point. From it, we learn that the group was founded in 2007, and that this is its first recording project. Often this can be a recipe for disaster, but the group reached out to an experienced production team (names you know: Ed Boyer, James Gammon, and Dave Sperandio). Truly, this is no little thing, and the resulting quality can be heard in every nook and cranny of the album. I give kudos to these ladies for doing their homework. Though they learned on the fly, they made sure they were learning from the best, and it made all the difference in the world.

What's great? Because shines with its use of ambient sound and excellent phrasing from the ensemble. Are those real dynamics I hear, too? Awesome. Gettin' Siggy Wit' It is a clever, creative opener with a pretty solid rhyme from music director Juliane Godfrey. Neat production abounds in that one as well. The group demonstrates comfort and ability in many styles, which is impressive ...

... but the high number of tracks and the broad range of styles covered make for a pretty disjointed listen. This is where those issues of identity creep in. What is the "Signature sound?" It's hard to tell from this album. Take Flight runs the gamut, stylistically, from Miley Cyrus to Gershwin. The only common thread in between is good singing. Good singing is of course always great to hear, but it alone does not serve to make a cohesive listen out of songs culled from so many eras of songwriting. If Signature wants to continue to keep its style options open, the arrangements need to step up and cover the gap. More re-interpretive (less transcriptive) arranging, and a clearer focus on using unique, cohesive arranging techniques (i.e. "Signature" syllables, voicings, arranging moments) would be a good place to start building the bridge.

Often these are the kinds of things that develop within a group over time, so it's no surprise that they haven't quite formed for this group yet. In only its fifth year of existence, the Signatures have managed to release a very praiseworthy album. I believe the challenge moving forward will be to continue to solidify a sound and identity. Once that begins to evolve, we may well be looking at the next big thing in female collegiate a cappella.

Starting a new a cappella group on a campus with an established scene is not easy, and actually putting out an album with said group can be nearly impossible. I must therefore tip my hat to the ladies of UCLA Signature A Cappella for the successful completion and release of a fine debut album. Indeed, Take Flight is neither excellent nor execrable: it's just fine.

The album is a good introduction to the group insofar as it lets the listener know that the group exists. The liner notes speak reverently about the "Signature sound", but it just doesn't come through in the music. Part of the problem lies in the song selection. Safe choices like Killing Me Softly and The Way I Am don't do anything to distinguish Signature from the rest of the all-female pack. Moreover, the album seems to flit from one genre to the next in the blink of an eye, sometimes even within the same song. Jammin' Medley is the most jarring, transitioning abruptly in tone and tempo from Bob Marley's Jammin' to John Legend's Used to Love U.

The arrangements don't take many risks either, but there is quite a bit of arranging talent in this group. Musical director Juliane Godfrey is the most versatile, providing fun and creative interpretations of both Gettin' Siggy Wit' It and The Call. Laura Zdrowski gives us beautiful floating block chords in Sunrise and a killer opening to Ain't No Other Man that are some of the most compelling moments on the album. Finally, Danielle Piccinini (in collaboration with Ms. Zdrowski) turns in a wonderful Party in the U.S.A. that cleverly and subtly interpolates Britney Spears and Shakira, by far the best track on the album.

As a new group, these ladies have learned a lot of music in a short time and are throwing everything they have at the wall to see what sticks. I have no qualms with this approach, but Signature should have done some more critical listening before going to press. Amazing Grace, Goodnight My Someone and Someone to Watch Over Me feel the most out of place, mostly because the rest of the album is so heavily pop-oriented and much better executed. Gettin' Siggy Wit' It features a great new original rap that is well executed by Ms. Godfrey and literally introduces the listener to the group, member by member. Because, with its whistling and blowing wind, is a haunting if not particularly original take on this a cappella standby. The most surprising song choice, the less popular Backstreet Boys single The Call, is also one of the strongest, thanks in part to stellar solos from Michelle Rice, Elise Shulman and Ms. Godfrey.

Signature has a great deal of potential, but the group still needs to hone in on its identity and develop that storied "Signature sound" more fully. If these ladies focus on their strengths and start taking more risks in their arrangements, their follow-up to Take Flight will really soar.