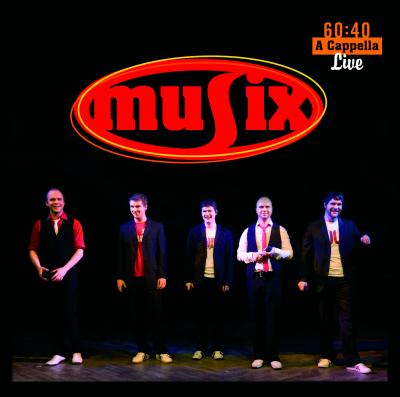 muSix are six full-ranged, smooth-throated German singers, possessed of an enviable blend and tasteful phrasing. Their latest does not show their talents off in the best light, unfortunately. 60:40 instead presents conflicting elements: many of the songs are in English, but the Germanic pronunciations range from noticeably accented to unintentionally comical. The album is indeed "live", complete with enthusiastic audience, but the vocals are often artificially tuned and effected to a degree that makes the album's initial songs sound like a series of studio tracks over live audience sounds. But then, mysteriously, on a few occasions, (like Wonderwall) the intonation is allowed to falter significantly. These inconsistencies mark not that muSix isn't talented, but instead that 60:40 makes for a confusing listen.

Pure Shores alternates between rocking and uncomfortable moments. Let Me Entertain You is a "meet the band" for Berlin audiences, explaining the group's a cappella nature, but doesn't make for a compelling musical track, especially considering its length. Smooth's lead is plagued by the omnipresent accent. And while the song's pervasive horn solo displays impressive range and strength, the tone color is reminiscent of The Muppets.

On songs like Bataillon D'Amour, Sikidim, Flut, Zweigroschenlied, and some of Puhdys, muSix displays the kind of phrasing and dynamics that catch the listener's ear as first rate. Their blend is almost always excellent. And since the text on these tracks isn't English, we can more easily find ourselves giving over to a purely musical experience and not raised eyebrows and cocked heads. Nonetheless, many listeners will sense missed references — cultural, textual, and stylistic — particularly on Sikidim and Puhdys.

One thing that's easy to enjoy on all the tracks is muSix' bass, Bjorn Sterzenbach. He's smooth as silk and wonderfully accurate, providing just the kind of powerful foundation that makes each track all the more listenable.

The vocal percussion could have also served a similar role, but the performances are not quite at the level that contemporary fans have grown accustomed to, nor do they take full advantage of the studio enhancements that the sung parts avail themselves of. In particular, though the kicks and highs sound fine, the snares universally fail to drive the backbeat, coming across more as air puffs than sharp cracks. Still, Let's Twist Again shows off some brief, but tasteful vp licks.

Neither fish nor fowl, muSix' wealth of musical talents are shown in an inconsistent light that most RARB readers will find more confusing than enjoyable.

In today's studio-obsessed climate, it's very brave to release a live a cappella album. Your abilities to mix and produce are greatly limited, and so much is dependent on how the live performance went. The advantage comes from the unique energy that only a live performance can provide and it's a great way to show off your true vocal virtuosity. MuSix, a German sextet, has released a live album that shows both the pitfalls and advantages of the live recording format.

MuSix is a very talented group. The vocalists lock chords with precision and skill, the soloists wail and yell with power and emotion, the arrangements pop with professional interest. Yet on their live effort, so many of muSix's talents are squandered. There are tuning issues on most songs (Pure Shores and Smooth stick out as being particularly offensive), soloists often sound tired and ragged, and arrangements do not always sustain interest. Now, I understand that it's impossible to have perfect tuning, and a live recording will showcase the littlest flaws, but you can hear the inconsistency in pitch and tuning even within the album. Compare the background lines and soloists on Pure Shores to those on the sublime Bataillon D'Amour, and the tuning errors are all the more apparent. The mix is passable on some songs, but on others the bass seems almost completely absent and the soloist buried by overbearing backgrounds.

Of course, it's not all bad. The energy on the album is fantastic, and the audience is completely into muSix. This concert seems like it was a blast, and muSix really knows how to grab the audience's attention. As previously mentioned, Bataillon D'Amour is terrific. The live recording really highlights the dynamic range of the piece, and the tuning and blend are excellent. The tuning is also very good on the Michael Jackson medley (MJM), which I need to give credit to for including some more obscure Michael Jackson songs (Liberian Girl? Awesome!). The medley itself is a lot fun, though some of the transitions are a little weak from an arranging standpoint.

As live albums go, 60:40 — A Cappella Live is a mixed bag. Fans of muSix and those who value energy over production and impeccable tuning will enjoy it, but other a cappella fans may gravitate to stronger live releases by groups like The Swingle Singers, Maybebop, and The Idea of North. There are some stellar moments and some impressive musicality, but on the whole the album falls a little flat.

60:40 — A Cappella Live gives listeners the muSix concert experience at home. I'm left with the impression that I'd have a great time at one of their shows, and an album like this would be a great memento.

Unfortunately, many of the choices that work well in a live concert setting don't play as well in recorded form. The pacing is highly uneven, going from the ten-minute Michael Jackson Medley MJM to the two-minute blitz that is Sikidim (Hepsi Senin Mi?). The former feels overindulgent and the latter ends abruptly with me wanting more. There are live show gimmicks, like the extended audience participation in Hey Ya!. There are long spoken interludes — Let Me Entertain You begins with a minute of greetings to the city of Berlin, then explains the layering of each piece of the initial groove. The song proper doesn't begin until around the three minute mark, only to end less than a minute later. The bonus track, Puhdys-Medley, combines all of these problems: it clocks in at over 14 minutes, features funny voices, and contains an extended monologue in which the John Lennon tribute He John is connected with Johnny Depp and Johnny Walker, while the rest of the group struggles to maintain their composure in the background.

Given these issues, though, the musicality on the album is solid. Bataillon D'Amour and Flut are top-notch songs, great examples of the clean, unadorned style muSix does best. Let's Twist Again features some nice instrumental imitations and feels fluffy but fun, if a bit out of place between Flut and Hey Ya!. In general, I found the American covers less interesting than the European ones, but that may simply be a question of my background, as I've heard Smooth and Wonderwall many more times than Sikidim.

The singers of muSix are clearly all good musicians who know how to put on a great show. If you're already a fan, pick this one up. But if you're new to their work, this may not be the best album to start with — get one that's actually an album, not a concert.

To order this album, visit the group's website, Amazon, or the iTunes store.