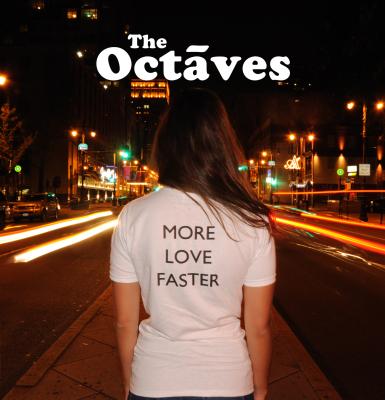 More Love Faster is a shiny, polished album with a couple of really fun tunes and some other, relatively indistinguishable pop songs. The '80s songs and the more recent songs all sound of a piece, which I guess is a testament to The Octaves' performance skills.

Amsterdam is a joyride — good beat, a catchy tune and a convincing solo by Chris Dolci. Plus it rhymes the word "were" with "super high tech jet fighter", which is just fun. A collection of entertaining details is an essential part of any greater whole. Dolci returns on Human, a very tight track that ends the album on a buoyant note.

The dirges on this disc are less successful. Don't Make Me Wait seems heavy and wrought, despite flashes of skill throughout, and the chords never seem to lock. Break Even is heartfelt and musically a bit untethered. It feels like it is reaching for something it doesn't quite get, for shimmer that never appears. This song sounds to me like it wants to be smoother and more liquid than it ever really gets. The arrangement tries all sorts of tricks to get there — bass oohs, bass pointilism, block chord ba-bas — and none of it really matches up with the singers.

I'm Yours is the biggest stinker — this performance isn't fun, and neither is the Bob Marley medley interlude. This is a great song, and I think groups are right to want to do it — but it needs to be light and simple and joyful. Nothing else will do.

The Octaves turned to James Gammon in Charlottesville for recording and then shipped their tunes off to Bill Hare for production, mixing and mastering. I think the group chose well and got good results. This group's repertoire lends it to an all-out studio approach. These tunes all sound heavily produced and better off for it.

In general, The Octaves seem to know who they are and to sing music that suits them. They still need more swing — that lift that the best performances find when everybody is working together, when music gels and takes on more. Probably the only way to get there is to keep making music along the way.

As a child of the '80s, I find something very comforting about the opening track Break It Down Again from The Octaves' newest recording, More Love Faster. I was a huge fan of Tears for Fears, and The Octaves created a momentary feeling of bliss as the marching drumbeat and the angelic chords lead into that unmistakable hook. Any time an opening track can bring an unabashed smile across the face, the group is doing something right.

For the most part, that something right is performing with a sound that is amazingly lush and evocative. The men from the University of Richmond sing as if they are trying to wrap the listener's ear in an electric blanket. It's both tender and sturdy. If you get a chance to listen to the album in surround sound, you'll understand exactly what I'm saying. The pocket is deep and the listener fits in nicely.

The soloists aren't the strongest singers, but neither are they a total detriment to the enjoyment of the album. All of the energy for the album comes from the background singers. On each arrangement, the block, rhythm, and ancillary voices take control of their parts and attack with a gusto that propels the sound through the speakers. It's relentless, like on the pounding rock song 1901, which could make it seem overwhelming it if weren't so much fun.

The leads try to keep up. Oftentimes, they don't succeed. Yet, when they do, the combination is lethal. We're all sick of Fireflies by now, but senior Eric Rudofker's light, lilting voice gives this shoegazing anthem new breath — revitalizing the song in a myriad of ways. As well, even when the tonality isn't spot on, as in Don't Make Me Wait, the artistry of Nickolaus Treviño's emotional phrasing makes up for the human fallacy. Sometimes you want a singer to perform as if it's the last time they'll be able to sing the particular song, or sing period. That magical moment is what elevates senior songs at collegiate concerts. Regardless if that was the case with Treviño, he brought it like it was.

No, seriously, it's because of the overall averageness between the two parts of the album — the background and the soloist. If the backgrounds are considered as sounding like a "4" album, then the soloists come across as being on a "2" level. But it's not that cut and dry.

Though the backgrounds are the best part of the album, the artifice keeps the album from blossoming to life. Harkening back to my review of Shotgun, it's as if the humanness has been stripped from the very soul of the performers. The percussion is slightly square throughout, with a too-heavy influence on the standard 4/4. Each of the songs begins to sound robotic. Whether from the artistic choice to do too much autotuning or a lack of musicality that necessitated the "fixing", each song sounds just like the other one: high buzzy tenors, a doom-doom bass, and some filler baritone lines. Almost as if they recorded the same background and simply switched out the lyrics to make a new song.

On the flip, to be honest, the overly natural recording of the soloists hinders most of the songs from being good. And though there are some standouts, there is nothing that screams remarkable on the album.

The Corner Pocket and Shotgun era is proving to be the pinnacle of achievement for The Octaves. More Love Faster just isn't living up to its ancestral reputation. Get the album if you are a huge fan of the group, but the general audience should wait until the next album.

Some albums just turn out average. If More Love Faster was in the Iditarod, the dogs of The Octaves would finish in the middle of their fellow racers, happy for some treats after their hard work but not remembered like the bigger, faster dogs who did the same thing better. You know, those who pulled out flashier tricks for Fireflies, had more energy on Amsterdam, and had a shinier coat for I'm Yours. But finishing in the middle is still better than being remembered for finishing last, which The Octaves are in no danger of doing.

I'll stop with the dog talk now. The most potential for a reorganized, stronger ensemble seems to lie in two songs, Break It Down Again and 23. Break It Down Again is that catchy Tears for Fears song, and one of the few tracks on More Love Faster that showcases strong arranging. There's a lot of meat, there's a lot of good ebbs and flows, there's a nice underlying drive. The writing is genuinely interesting on Break It Down Again, but unfortunately the soloist struggles with his intervals. 23 also has a very memorable arrangement, but this time with a solid lead full of character. Both of these areas — more creativity, more character — would help The Octaves give more to their listeners on future recordings.

When most of your soloists are average, it's pretty hard to make a stellar album. This is more or less the story on More Love Faster. Some leads have shaky pitch, but a more general problem seems to be that they're not on full throttle. When you're the lead on a song, you really are the song. We a cappella fans like an entertaining background more than most, but the lead's gotta hold up their end of the bargain first. The best front on More Love Faster definitely comes from Eric Rudofker on the aforementioned 23, who sounds like he really gets what he's singing.

And so, it seems The Octaves' best days are still currently in the past. But there's no time like the present to change that ...