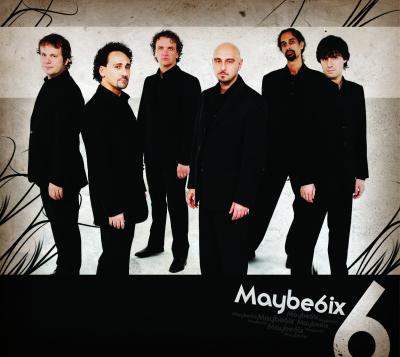 "That's it? That's all ya got for me?", I hear you thinking and/or saying.

Well, frankly, that's about as much as there is to say.

Only through a fair amount of internet research did I come to learn the origins of the most of the material covered here and I suspect most of the names — such as Raf, Samuele Bersani, Negramaro, Daniele Silvestri — will be unfamiliar to most of you. The closest you'll likely come to something recognizable is Oceano which was released by Lisa in 2003 but charted here in the US after it was covered by Josh Groban (it's appeared on no fewer than five of his albums, in fact!).

OK, but knowing the repertoire isn't essential, right? Surely we can appreciate music in foreign tongues? True. And Italian is a beautiful language. But absent any lyrics or translations, there ain't much for us non Italian-speaking folks to work with.

"Pffffft!", you say. "You've had the same beef in the past about groups like Basix and Rajaton and positively adored their work. Why are these guys any different?"

Aye, there's the rub. Quite simply, when it comes to creativity, complexity, and overall artistry, Maybe6ix has a long way to go before they can approach the level of craft and artistry that typifies the best European a cappella ensembles.

To be fair, the group's overall sound is pretty good, and even better when Bill Hare is at the controls, as he is on five tracks. But the arrangements are woefully lacking, especially for a six-member group that should be able to move beyond power chords, word echoes and "doo-wah" backgrounds to create a more layered, textured, engaging and/or interesting foundation for each song. There are a few scattered moments: the varying pieces of Oceano, the jazz chords in Cose in comune, and the funk instrumental breakdown in Baila, to name three. But more often than not, this is vanilla pop delivered in a pseudo-boy band style that renders it generic and ultimately monotonous. When it's not that, Mayb6ix seems to aspire to a King's Singers-esque, somewhat more classical, formal sound but the performances lack the unfailing precision and the arrangements lack the complexity to make any such comparison even remotely reasonable.

So like I said: serviceable Italian pop a cappella for Italians. For the rest of us, it's MaybeNot.

Maybe6ix is good; really, really good. You'd suspect that this is just another release from a European powerhouse who has been around forever, but Maybe6ix is a debut album released in 2009 from these Italian gentlemen. Maybe when your country has a long history of music and art masterpieces, stuff like this comes easy. That's my best guess.

Ringing like a barbershop quartet while often sounding as full as twelve-member group, Maybe6ix saddles the divide between pop and a sort of comfy-cozy jazz that's a delight to the ears. This group covers all of your burning desires for a small all-male ensemble. There's the signature flashy tenor. There's the rich bass rounding out the bottom. There's seamless handing-off of the melody line among voices, in a group which clearly makes balance and blend a top priority. Most importantly, the voices take center stage at all times, and the raw talent is clear and awesome to hear. At times delicate and intense, and other times a party through your speakers, Maybe6ix is an easy recommendation for our community.

Most of the arrangements on Maybe6ix are rather interesting. I especially liked the two slower standouts, the beautifully moving Giudizi universali, and the captivating and soaring Qualcosa che non c'è (which appears on Sing Six). Two songs that could benefit from further editing include Io per lei and La terra dei cachi, both of which feel like too many songs rolled into one "song"; they're long and winding journeys trying to hold our attention. But overall, I don't think you'll be disappointed with the material here, even if you don't understand Italian.

Maybe6ix is the kind of album that listeners can really sink their teeth into, and other groups can draw inspiration from. These guys know what they're doing, and we all benefit from their great work.

Sometimes an album just makes you smile. Maybe6ix is that kind of album for me. I can't understand many of the words but it's clear that these singers genuinely enjoy what they do, and I appreciate that!

Backing up a step, you need to know that Maybe6ix is a six-member all-male a cappella group from Italy. Maybe6ix, their self-titled album, has some very good singing on it and has had at least three songs featured on a cappella compilations: Giudizi universali and Io per lei are found on the A Cappella Made In Italy album, and Qualcosa che non c'è is on Sing Six.

I loved that I hadn't heard any of this music before. This is not your run-of-the-mill a cappella album filled with Top 40 covers! Instead, this is a unique, high-energy album with lots of interesting and unexpected things going on. Often the listener's attention is kept through sound effects — the kind generated by the group themselves, not studio post-processing. Giudizi universali (my personal favorite song) includes a haunting whistled theme throughout the song. Cose in comune has vocal trumpets. La terra dei cachi has kazoo effects, which could be voices transformed through production, but also could very well be actual kazoos.

Sometimes the group employs humor. I'm sure I didn't catch most of the humor, but as an example La terra dei cachi starts off as Bach's Air on a G String, then morphs via the kazoo section mentioned above into a commercial jingle-type sound. (One of the few words on the album I did understand came in this song: "plasma", presumably indicating a plasma T.V..) The song certainly keeps you on your toes!

I love the group's vocal sound. The voices are quite good, and in one of the songs (Qualcosa che non c'è), there are places where the soloist sounds almost operatic, in a Josh Groban kind of way.

My only real complaint about the album comes from the two final songs, Baila and Baila (Remix). I had to ask myself why these were even included. My best guess is that Baila is a crowd pleaser at their live shows, perhaps part of their signature sound ... but it has a very amateurish feel compared to the rest of the album. It's repetitive, kind of shouty and in general not very musical, and one of the singers keeps shouting out words like "Yeah!" and "Come on!" throughout. I would have enjoyed the album more without the inclusion of either of the two versions of this song.

That's a minor quibble, though, since the bulk of the album is very enjoyable. And Italian speakers will undoubtedly find it even more so.