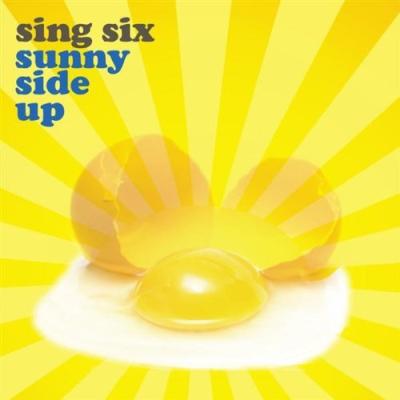 You know what's so great about the Sing series? It really is all about the singing. Sure, there are bells and whistles (plenty of them scattered about), but there is also artistry to accompany and, dare I say, justify the copious amounts of production featured on the disc. While not every track is my favorite style of music, there's enough substance to make me sit up and pay attention and appreciate what went into the creation of the tracks featured on Sing Six: Sunny Side Up.

A highlight for me include the precision of Hyannis Sound's face-melting on Foreplay/Longtime. The rhythms executed here are not for the faint of heart, but what really got me was my tendency to want to blast this track and do some wailing in the car. Studios can't create all the energy heard here, but you can definitely tell some blemishes were smoothed over in the mixing process. I don't care because the singing is so great.

Got to Get You Into My Life by Firedrill! is the most fun ride an a cappella group has given me in my life. Ed Boyer's arrangement is a breath of fresh air that will have any pre-millennium aca-singer reminiscing about what an actual arrangement sounds like. It helps that Michael Barnicle is ridiculously good at taking the lead on this one. This track is so good, I just jumped on the group's website and purchased their album Sings Without Music...Volume II. The purchase was overdue, but listening to this track made me remember why a cappella is so great.

Just Dance by the Red States reminds us that the Contemporary A Cappella League is more than just an old-men's club that complains about how great it used to be to sing in a group while sipping on some root beer. These post-grads are still out there doing it, and doing a great job. Although the track is a little lengthy, the energy is infectious and will have you dancing in your seat.

Basix gives us some original music with Diversity. The song has a Middle Eastern feel, a trance beat, and some snake-like melodies sewn into the musical tapestry. You won't even care what they're singing about.

Vocal jazz enthusiasts will get a kick out of Qualcosa Che Non C'e by Maybe6ix with complex tight chords that build to a climax and then back again.

I've been hearing a lot about Sonos through the a cappella grapevine, but hadn't heard them before I Want You Back here. Talk about creativity! Sonos should be given an arranging award for this one. Upon first listening I had no idea what song it was but had the "aha!" moment about a minute in. The Jackson 5 tune is slowed down to a grinding pace and Christopher Given Harrison and Rachel Bearer do the rest. This track is one of many that make the album worth purchasing.

So, what are the week points? Well, the Beelzebubs performance of the Nine Inch Nails All the Love in the World aside and the original composition of Penn Masala's Distant Places notwithstanding, the collegiate vein doesn't do it for me. Even the 18 Wheelers (a high school) group are keeping pace with the collegiate groups. That doesn't bode well for college a cappella. What it suggests to me is that college groups are resting on their laurels. They're letting their producers do all the work. It's not that the college groups are bad, because they're not. They have powerhouse soloists, like Happiness Chijioke on Wreckless Love. Everything is in order for these groups. They're tuned, mixed well, great solos, but yet come across as lukewarm. Why is that?

Plain and simple, they don't create arrangements. They replicate and copy what the original artist did. In the a cappella community, that's not good enough. Not anymore. It was a novelty in the late '90s and early '00s. It's time to start taking lessons from groups who actually arrange songs.

That soap-box rant aside, the reason you should buy Sunny Side Up is because of the balance AACI has created with its compilation albums. You don't have to listen to a mind-numbing album of direct transcriptions. You have a cappella gems scattered about the landscape to scoop up and coddle. Yes, the Sing series is an impressive one. If not just for the fact they put some creative groups in your face you might not otherwise discover. There's much to discover here. Go buy it.

I mean, what exactly did you expect from a compilation album of the best a cappella music of the year? Sing Six: Sunny Side Up is a phenomenal listen, with tremendous diversity in styles and groups. While you'll notice I didn't give universal "5"s across the board, please understand that every track is great. Some are just greater than others, and I wanted to make sure this point was accurately represented.

Let's talk about the best of the best on here. Hyannis Sound's Foreplay/Longtime opener is seriously face-melting, as the CD insert would suggest. Does it feature over-the-top production? Probably. But it's a guilty pleasure for me. It's so, so good, and even better if you're familiar with the Boston classic. (Who isn't?)

Firedrill!'s Got To Get You Into My Life wins my vote for most technical precision on this album. Their short, snappy phrases are so well executed in all aspects — intonation, dynamics, energy, you name it — that you'll have to listen to the track two or three times before moving forward. This performance is stellar.

And finally, I need to mention Wreckless Love as performed by the Sil'hooettes of UVA. My Lord. This is hands down my favorite track on the album. Soloist Happiness Chijioke (awesome!) gives a sultry and incredibly powerful performance; her energy seems to spread through the whole group. I've really never heard an a cappella track that delivers more raw power. Every aspect of this piece pushes the envelope and sets new standards for recorded a cappella. It's that good.

Sunny Side Up is a very well put together compilation. The artistic presentation is wonderful. The mastering by Bill Hare and co. is seamless. Even the track list seems very carefully thought out; the diverse range of styles is placed in an order which allows every track to sound fresh and unique.

Nothing on this album disappoints. If you haven't already picked it up, I have some advice: pick it up.

Sing Six: Sunny Side up should come with a warning label. "WARNING: This album will induce the purchase of numerous albums represented within." You will want to hear more from every group on this disc. (Damn you, Red States! Your outstanding Just Dance is currently your only available recorded song!). And the price is right; at the time of this writing, Sing Six is available free to members of CASA.

As is typical for the Sing series, Sing Six is a good sampling of groups of all types (high school, college, semi-pro, pro), homelands (other than the US, Italy is represented by Cluster and Maybe6ix, Denmark by Basix, and Norway by Apes & Babes), and genres (pop and rock, of course, alongside hip-hop and folk).

Most impressively, though, Sing Six dispels any notions that contemporary a cappella groups can't do original songs — or that originals are only for pro groups like the House Jacks. Don't get me wrong; the Jacks' Sing Six contribution, What's For Real, is great, but we expect greatness from them, and so we're not surprised when they achieve it. There are four (Four!) college groups here with originals: Brandeis VoiceMale's Time (Bring It On), Yale Out of the Blue's Love Begins, Clemson Tigeroar's Waiting for You, and UPenn Masala's Distant Places, and all four hold up seamlessly with the other songs on this collection.

Like any compilation, though, Sing Six isn't perfect; it's almost impossible to pull together this diversity of groups and styles into one cohesive whole. Apes & Babes' lovely, haunting Bansuil (Su ru ruddi) fits only as the album-closer, and even so, the transition from the Bubs's Nine Inch Nails cover (All the Love in the World) to a traditional Norwegian tune is a little abrupt. Similarly, Say Goodbye sticks out a bit as the only hip-hop tune here — but still, we could do far worse than an excellent, fun track (with fantastic vocal trumpets!) that doesn't quite flow with the rest of the album.

Not surprisingly, Sing Six lives up to the high bar set by the previous five editions of the series. (The lowest average composite rating among RARB reviews was a 4.3.) You probably don't need me to tell you that, though. Just the strength and reputation of the groups involved is indicator enough. So instead of an endorsement to purchase this album, I'll end my review with a note of gratitude: thank you to the folks at CASA for consistently putting out such enjoyable, well-rounded collections.

This album is available free for download by CASA members, and includes three bonus tracks. Tracks are also available on iTunes, Amazon, and ACR. Physical CDs are available by emailing sing@casa.org.