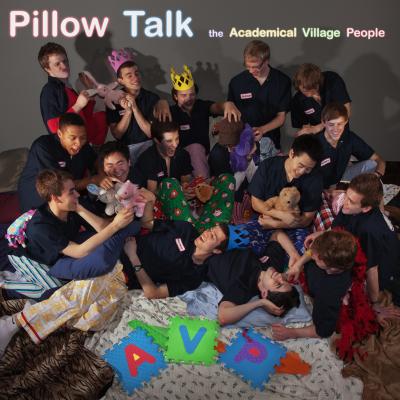 The Academical Village People (AVP) of the University of Virginia have had a weird trajectory in their history of collegiate a cappelladom. Throughout their career they have reached some remarkable highs, bringing fun and laughter to that bastion of masculinity known as male collegiate a cappella; notably, having their cover of Kate included on the inaugural release of Sing: A Vocal Explosion, and the vocal powerhouse that is Mickey DaGuiso. Their latest recording, Pillow Talk, is definitely one of the high points.

AVP decided to produce a disc that is heavy on the "natural" effects. Except for some of the guitar licks and most of the percussion, no one would ever argue against the fact that this is a recording made with the human voice by a bunch of guys who enjoy singing with each other immensely. There is a palpable crackle of energy in every track thanks to the guys' talent and the deft hand of James Gammon providing some hot studio skills.

The album opens with a gritty and energetic version of John Mayer's Good Love Is On the Way. Soloist John Buttram lets out a commanding wail to open the song that lets the audience know that it's in for an incredible ride with Pillow Talk.

And for the most part, the group lives up to the promise. Several of the tracks are absolutely stellar. U Remind Me is that sexy beast that you want to have in your pocket for those special moments. Come Sail Away soars in the grandest of fashions as one of the more ballad-like tracks that AVP has become known for, like Ain't No Sunshine and Fields of Gold. And there's also the truly majestic Subterranean Homesick Alien.

Even if a song isn't necessarily a "5" on my scale (like Green Light/Ignition), the guys are still making some slammin' music with a heaping amount of bravado and gusto. These are two qualities that seem at odds on an album called Pillow Talk, unless that's how you roll.

But for every high point, there are a few lows that keep this album from being one that I'd give an unequivocal "5" ranking. The aforementioned Green Light/Ignition is a track that thematically sounds great on paper, but the resultant construction and execution falls short of making it mind-blowing. Green Light alone would have been a hit on anyone's "best of" list ... but then the abrupt (and I mean ABRUPT) transition into Ignition just kills all of the joie de vivre set at the beginning. It's almost as if arranger Jordan Yonce didn't trust the original source material and had to place a huge "this is supposed to be funny" AVP stamp on it. Ugh.

Just like the inclusion of I Just Can't Wait to Be King. That will just have to speak for itself.

Other tracks like I Believe in a Thing Called Love and Want You Bad come across as a bit frenetic and screechy. The arrangements are a bit staid, even with the cool electric guitar effects. Most of the middle of the disc sounds like it was performed by the group a decade earlier — so not so cutting edge today, but I'm sure both of the tracks slay when performed live.

Even though the album isn't a resounding success, it's still an upswing for AVP and one that even the general public will enjoy. I'm sure the group's next album (Murphy Bed?) will make up for the lacking areas on this one.

Between this album and my opinion of the group's prior release All Night Lawn, AVP is starting to sound dangerously like middle-of-the-pack material. Yes, there is commendable work here, and sure, it's hard to beat an album from Oprah's Book Club (read: these guys are still the humor champs). But overall, AVP is going to have to jack up its efforts across the board to hold the line.

There are marked peculiarities on Pillow Talk, particularly within the strongest track and the weakest track. Turns out the strongest track is a peculiarity in and of itself: how did I Just Can't Wait to Be King manage to outshine hip tracks (Good Love Is On the Way), smooth tracks (U Remind Me), and just the rest of the tracks, period? It's alarmingly fun and fresh, and it just feels difficult to say this about a Disney number, but darn it's good, and the playful production has a lot to do with its success. Listen and enjoy.

The second peculiarity lies within the dud This I Promise You. AVP has a history of doing well with boy-band hits by infusing great energy and charm into such numbers. But this really tanks. Two oddly paired soloists, a sleepy background, super generic drums, a strange instrumental section, and a cheesy key change don't add up to much more than confusion.

And the last peculiarity is with Come Sail Away, which is such an uneven arrangement. Before the rock-out-hardcore-like-your-hair-is-one-fire part starts, it's just a huge snoozefest (not great slumber party material at all). And the end is kind of dull, too. The whole song needs a more refined atmosphere — like the atmosphere AVP pulled out for Chicago on Learn to Interact, perhaps.

These three songs really shaped my view of Pillow Talk, but there's more good and more of the less-than-good to discuss. Production and ideas keep getting cooler on the popularly covered Fireflies, so much so that I'm pretty sure there are actual bugs zipping around on this version. I Believe in a Thing Called Love could be the perfect anthem for AVP, but I can't understand a thing the soloist is saying when he goes for the falsetto frenzy section, and the background is a little blah, too. The soloist on Somebody Like You has a nice vibe about him, but the arrangement is just a little too campy. And finally, I loved hearing some a cappella punk rock with Want You Bad by The Offspring, but once again, there's a lot of muddled diction. It's like: do I want you bad, do I want you back, what's the situation here? There are a lot of inconsistencies on Pillow Talk across the board.

Basically, it boils down to this. AVP is still delightfully quirky and hard not to like. But the group's music quality continues to slide, and that's worrisome. I've never viewed AVP as just another collegiate group, and I hope that's not where this is all headed.

The Academical Village People are at their best when they're big and fun. These guys are boisterous and charming. This album isn't always the most innovative, and it's generally pretty free of studio trickery, but the guys stay true to the old all-male formula: sing your guts out, have fun, sell records, repeat.

Now, having spoken to the charm of the group, I have to note that the track list often hinders AVP from doing what it's best at. Pillow Talk runs the gamut from modern pop, to R&B, to fun rock, to Disney(!), to '90s boy band, and back around the block again. Few groups on Earth could possibly pull off this kind of genre diversity and really nail each one; AVP is no exception.

The guys, predictably, excel at the fun stuff. The album starts out strong with Good Love Is On the Way featuring a great soloist, and some nice big, open "doo bah" arranging. The energy shifts slightly but stays bouncy for Fireflies, and the guys pull a neat whistle trick off to navigate the electronic effects of the original without relying too much on the studio themselves.

Things hit a bit of a speed bump at U Remind Me. Usher's original is sleek and sexy with just a bit of bite beneath the surface, and AVP just can't quite summon up the game to match him. The tenor 1 "no"s at the beginning are painfully earnest and square, setting us up for a track that yawns more than it smolders.

Pillow Talk proceeds along these lines, with the highs and lows directly related to how much fun the group sounds like it's having, along with the strength of the soloist. There's not much here that a regular college a cappella listener hasn't heard before, and by the end of the album (having been pulled through twelve songs in wildly contrasting styles) even the group's charm begins to wear a little thin.

For AVP to take it up a notch, the group needs to get a little more creative with its arrangements and a little more focused with its song choices. Fewer open syllables, a little less frantic action from the backs, and a little more focus on emotion and drama will help to make each song more distinct and keep a listener's focus from shutting down around track eight. The guys have the spark, and if they can apply that to music that feels more unique, distinct, and focused, then their next album will be top of the class.

To purchase this album, visit the iTunes Store or the group's web site.