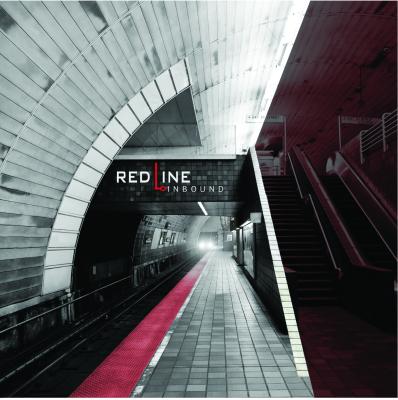 Inbound is the debut album for Redline, one of those swell CASA Contemporary A Cappella League groups that have been pleasantly springing up around the country. I've been expecting a lot more League group albums to start rolling in, so I was quite interested when Inbound arrived. And though it comes backed by strong accolades, I find the music here pretty commonplace with lots of room for growth.

Inbound really rides the middle line quite firmly. League groups are post-collegiate ensembles, but to my ears this album fits right in with the average all-male collegiate group's record. The song selection is your standard mix of mega pop hits and male crooners (which are not given full songwriter credit in the liner notes; no mention that Jamie Cullum covered Rihanna on Don't Stop the Music?). Arrangements are mostly serviceable, with some rather fine (the delicacy and sweetness of Rhythm of Love that just pops from the speakers, the slick layering of Break Anotha), and some a little too janga-janga-janga (Whistle for the Choir). Soloists occasionally fluff their feathers but don't give us a real song-and-dance show. Energy is acceptable, blend is decent. Not too much stands out here.

However, there is a definite, consistent vibe to this album, which may be as hard to achieve as making a really memorable album. I'll call it the Real Cool Dudes vibe — a nice laid-back, chill, rather sexy feel that will hopefully carry over from album to album to give these guys a familiar signature.

The plain that's the widest for exploring now is creativity. Everything on Inbound feels pretty faithful to the covered artist, and the vocalists all sound pretty behaved and comfortable just hittin' their notes without much dynamic range. There is much more artistry needed, from unexpected arranging to pushing the boundaries of vocal expression and sounds. Hopefully Redline can cause a stir with its song choices and deliveries next time.

Redline is an all-male post-collegiate CAL group based in Boston. On Inbound, these guys have selected repertoire with a lot of energy — and they deliver it. This group's biggest asset is that it clearly sounds like it's having fun — and, equally important, that these guys enjoy the songs they're singing.

The largest challenge with songs that have a lot of energy, though, is the inclination to push them too hard, all the time. I really would've liked to have heard more dynamic range in these songs. The guys have a good start with the phrasing on Shake It and the bridge on Break Anotha, but they would achieve an even more intense performance with a wider range of quiet moments in their uptempo songs.

Mellower songs face a similar struggle. On Jamie Cullum's version of Rihanna's Don't Stop the Music (which is credited just to Jamie Cullum here), the guys settle into a loungey groove and then just sit there. Don't Cry has some great whooshing effects at the beginning, but I really wish they'd been even more intense.

The group's other big challenge is syllable choice. There are a lot of harsh syllables here that draw the attention away from the music. "Dm", "dum", and "dah" (plus the occasional "dooh-ey") overwhelm Love Again for the First Time, and these same "dim" and "doh" syllables detract from the mood at the beginning of Everything. The "chiggah-chiggah" line in the background of Don't Cry certainly helps this over-six-minute(!) song move forward, but it also grows a little distracting after a while. On Dynamite, the arrangement coming out of the bridge is gorgeous — there are some seriously cool cascading notes and effects here — but, unfortunately, they get lost under a harsh "gading-gading-ga-lacka-lacka" line that makes it hard for me to focus on the cool notes the guys are singing.

Overall, though, the guys have a good start here; after all, Inbound is the group's first recording. I especially like the arrangement of Just the Way You Are with its hints of Every Breath You Take underneath. Especially with covers, every reviewer comes into an album review with some biases; I'm really not a fan of Bruno Mars, and I always change the station when his version of Just the Way You Are comes on. So it's an especially strong compliment to the guys of Redline that they've delivered a version of this song that I actually enjoy listening to. The same thing goes for Rhythm of Love; these guys have pulled this song together in a fun way (I love this arrangement, too — nice job, Matt Craig!). And while I'm throwing out kudos for arrangements, I'd also like to tip my hat to Josh Brodsky for his arrangement of Whistle for the Choir (love the bass line on this song, too!).

Redline has given us a strong debut recording. The strongest songs here are quite enjoyable, and with just a little work on syllables and dynamics, the group could bring the rest of its repertoire up to that same high level.

Inbound could be the model of a successful modern a cappella album. All the elements, all the trends: it's all here. The Boston boys of Redline take what could be a completely conventional effort and elevate it with amazing musicality and smart choices.

Credit must be given to Liquid 5th Productions; this is an album for audiophiles. Every arrangement is taken to a higher level by inventive and creative production work. The mix is masterful, keeping disparate parts separate and never overwhelming the ear with too much sonic information. Vocal percussion and rhythm parts sound freakishly good — there were many moments where I was completely baffled as to how the sounds were achieved. Particular standouts for me were the atmospheric, mood-building use of reverb in Just the Way You Are, and the contrast between the distorted vocal backgrounds and crisp and clear bass in Beautiful Child.

But even the best engineers and mixers can't fix a group with no musical skill, and the men of Redline show themselves off as being some of the best in this field. Soloists are uniformly excellent, arrangements are tight and efficient, and the group's tuning and blend are terrific. The group seems equally at home in the club (Dynamite, Shake It), at a rock show (Break Anotha), and in another time period altogether (the lovely intro to Whistle for the Choir, Everybody Needs Somebody to Love). If you listen to only one song from Inbound, I recommend Don't Stop the Music. The soloist, Andrew Kenyon, inhabits the song with a vital drive that's both sweet and sexy. When the song breaks down to only a few voices, it's a dramatic moment; kudos to Dave Raiser for a fantastic arrangement.

Well, it's time for me to qualify my raves with a few reservations. The album maybe has one too many cutesy songs; for me, Redline is at its strongest when the group is really in the groove, and the foursome of Whistle for the Choir, Everything, Rhythm of Love, and Everybody Needs Somebody to Love doesn't do the group many favors. The syllables in some songs also have a tendency towards being too silly; I think some of the arrangements on the album could really benefit from simplifying the syllables (the repeated "jim jim jim jigga jim" line in Don't Cry is particularly egregious). My only other main concern with Redline is the size and sound of the group — its sound is very much rooted in the collegiate realm. One of the pluses of professional groups is smaller size, which allows the individual members to shine.

With subsequent releases, Redline should focus on finding a way to transform its sound into something distinctly "Redline", and to move away from the looming specter of collegiate a cappella.

To order this album, visit CD Baby, iTunes or the group's web site.