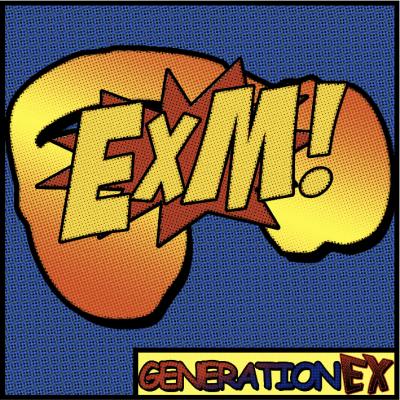 The overall "3" given to Generation EX from Extreme Measures of the University of Connecticut labels it as "average" but it might just as easily be labeled "typical". That is, possessing of the same or similar characteristics (read: flaws) of collegiate CDs that cross my path these days.

Though it's by no means a trivial matter, let's put aside the matter of correct chords and ability to sing. More often than not, these things are a given, and in the case of Extreme Measures, the ability to sing well, if not extraordinarily, is certainly there and the chords are generally the correct ones (albeit sometimes they could certainly be made more interesting).

Let's also put aside the issue of top-notch production, which is no longer the luxury that only a few select groups can utilize. Again more often than not, even second- and third-tier collegiate groups are availing themselves of the ever-increasing number of solid studios, producers and engineers who have put out an a cappella single, and ExM is using DioVoce, one of the oldest and best in the country.

Where then do we focus our attention? If you read my reviews frequently, the answer will be no mystery: it's the arrangements where everyone needs the most help, and while the issues are many, there are perhaps three areas that consistently cry out for attention:

And if you'll allow me one more pet peeve: where have the dynamics gone? It's notable that in Fireflies ExM does have a bit of dynamic variation and it suits the song beautifully. But why is that the exception to the rule? If you're trying to build to a forte or fortissimo at the end, you just can't be forte throughout. Not to harp on one song, but just a hint of restraint in the first half of Don't Let Me Down would have made the wailing at the end far more emotional and far less grating given that the volume is essentially static from the top.

There's a certain safety in numbers, and ExM has plenty of company all across the US churning out albums that are reasonably pleasant and occasionally admirable. But as the bar moves ever upward, if they — and the rest of the college groups out there — really want to get my attention, they need to work a little harder, develop a bit more complexity and variation, and strive to be anything but average...or typical.

I have the misfortune of writing this album review immediately after I wrote a review of one of the most original a cappella albums I've ever heard (Postyr Project). By comparison, Generation EX seems rather ordinary. Yes, there's some good music here. Yes, it's entertaining. And even yes, it's kind of fun to listen to. But there's not a lot of meat here, and there's not much that you couldn't get from any of a number of other collegiate a cappella albums.

Generation EX begins with a very solid effort on All the Above. Interesting use of auto-tuning, a lot of energy, and even a rap. By contrast, the next song, 10,000 Nights of Thunder, is quite plodding and repetitive. Haven't Met You Yet later in the album is very similar in this regard. The third song, In a Graveyard, offers something quite different from the first two in a nice, effortless, soaring solo (by Nicole Creatureo), but rest of the arrangement seems a bit thin to me. The final track, Winter Song, suffers from the same problem (albeit with different soloists).

As I thought about the songs I liked most on the album I realized that they were, well, all songs that I like. That is, if I liked the original version of a song, I liked the Extreme Measures' cover. That's not always the case with me, so I'm not sure quite what it means. At any rate, Just the Way You Are (Bruno Mars, not Billy Joel), Fireflies, and 25 or 6 to 4 are to me the best songs on the album. Andrew Folsom's solos on Just the Way You Are and Fireflies are great, and he somehow manages to channel a bit of the original artist on each song. Without reading the liner notes I wouldn't have even suspected the songs had the same soloist because his voice is subtly different going from the one track to the other. 25 or 6 to 4 brings back the energy of All the Above, and Michelle Krol really belts it out (in a good way).

I can't really recommend Generation EX for purchase by the general a cappella fan. There are just too many other outstanding albums out there. But I think UConn students and other fans of the group will be quite satisfied with the album. As I said at the outset, there are a lot of good things, even if nothing extraordinary.

P.S. — As I browsed to the group's website while writing this review, I found the very first statement to be "Extreme Measures is one of UConn's premier A Cappella groups." Not to be pedantic, but my first thought was (with a nod to William Goldman), "I do not think that word means what you think it means." And my second thought was that the group would do well to read Mister Tim's comments on the use of "premier".

If you've ever been in a conversation with someone who has great ideas but uses the wrong words to communicate them, you'll know what it's like to listen to the latest album by UConn's Extreme Measures. There are clear moments of musicality that stand out on the album, but the majority of the rest is average and at times very behind the curve. Extreme Measures is a relatively young group; they've only been around since 2004, so I understand that they haven't quite grown into their own as contenders in the recorded a cappella world. They do have a few things going for them that any seasoned group would kill for, the most important of them a recognizable and cohesive group sound.

However, Generation EX is by no means a perfect album. While Extreme Measures has the basics of singing as a group down, many other musical aspects of the album are lacking. Arrangements leave much to be desired; most of them are purely transcriptive, with the exception of the two arranged by recognizable names in the a cappella world. When Extreme Measures is singing good material, they sound worlds better than on any other tracks — this group's sound and well-written music are a winning combination. Joseph Bates' arrangement of In a Graveyard (originally featured on Transit's debut album) is performed with some of the best and most unified emotion on the album. Likewise, Brian O'Shaughnessy's arrangement of 25 or 6 to 4 is sung well and with gusto, but the song itself doesn't quite rise to the heights you'd expect of a Chicago cover. This is mainly because the soloist, Michelle Krol has a wonderful voice, but a soaring rock tenor she is not.

The transcriptive arrangements, however, are noticeably less varied, sometimes to the point of homogeneity. Particularly notable in this regard is 10,000 Nights of Thunder. Extreme Measures' version robs all the unreserved rock and sass from the Alphabeat original and turns it into a saccharine, vapid pop song so lacking in textural variation and energy that you can't tell where the chorus is. The sample problem exists with Fireflies, in which sparse rhythmic motives make up 80% or more of the song and pads are essentially absent. Even the opener All the Above has a merely neutral and general energy. All the swagger and stank of the original is eschewed for simply singing the words of the song. The arrangement of the bridge is also inexcusably full of incorrect chord inversions, which sap the song's movement and allow it to stagnate so the final chorus sounds like it was merely dropped in.

Then there are shining moments of musical promise, the clearest of the bunch being Jeff May's arrangement of Haven't Met You Yet. I was dreading what Extreme Measures might do with the trumpet solo in the bridge, but I was pleasantly surprised by the vocal jazz that took its place. It was a pleasant surprise, and one that shows promise for the group's future.

Extreme Measures has the fundamentals of singing down. The group's next step should be to use them appropriately. I've already talked enough about arrangements, because they were the most noticeably lacking part of Generation EX. Michelle Krol's placement as the lead on 25 or 6 to 4 is endemic of the group's more subtle but equally important problem. A group that clearly does well with vocal jazz and lighter-hearted music will clearly be out of place covering Chicago or Maino. My advice to Extreme Measures is: First, more importantly than just about anything else, make sure the music you're singing suits the voices singing it. The rest will be infinitely easier if you sing what you excel at.

To order this album, visit the group's web site or send requests to exm.uconn@gmail.com.