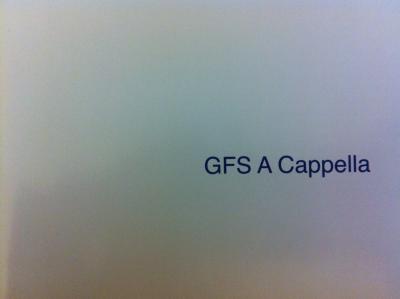 I called GFS' last album Vinyl an "evolution" as opposed to a step forward. On that album the group had clearly taken a few risks: some were improvements, while others came out a little rough. I'm happy to say that the group's latest, The Blue and White Album, is a solid upgrade from GFS' previous work, if for no other reason than it showcases what this group really has going for it: youthful energy and above average soloists for a high school group.

Here's the caveat. This, out of necessity I feel, must be a different sort of review than I usually write. After hearing several incarnations of this group since 2002, I sense that GFS isn't really interested in playing in the a cappella big leagues. There is precious little production to speak of on this disc, which looking at it positively is what one might say allows the leads to shine and the fun energy to be felt. Looking at it less positively though, one might say that this group is stuck in the '90s in terms of its approach to recording a cappella (big, choral sounding recording/basically no studio ear candy). Family and friends of the group will dig it, and the group probably had a blast recording it, but the rest of the a cappella world can pass on this one.

With that out of the way, let me put another hat on to give this group constructive feedback instead of a review. I'm going to address this particular group's work relative to previous incarnations of the group, and in the context of what I think the members are trying to achieve (as opposed to comparing them to the general body of a cappella — see the scores if you're interested in that). GFSers, follow me below...

GFS — more so than on any of your previous records, your love for singing really comes through on this album. From the first notes of Lady With the Spinning Head, it sounds like you guys are really grooving and having a good time. Evan Magoni's percussion is solid, and I like that it's treated just a little apart from the rest of the ensemble — it gives it more punch, even in its rawness.

Your soloists too, are quite good. Johanna Velasquez in particular impresses with a solid take on Aretha. In general, everybody sounds energized and pretty free of the vocal quirkiness that often plagues high school choir singers attempting pop music. So, points for style and authenticity.

Here's the deal: you guys sound like strong singers — I'd like to hear you tackle some more complex arrangements. A lot of your stuff establishes a simple loop, and stays there for most of the song. Choruses often repeat verbatim. This approach is fine for groups who can't handle more, but I really think you guys can! Change up sections when they repeat, feel free to re-arrange the form of songs and even to mess around more with their style. Work on doing more covering and less transcribing in your music.

If you all can do that while holding on to all that great energy, you'll make the best GFS album ever. If you're interested in making the best high school album ever, take a listen to some of the other trailblazers out there to get a sense of how to use the studio to not just capture your sound, but to transform it artfully. If that's not your goal, cool. Either way I wish you many more years of fun and music making!

I generally don't like high school a cappella albums, but The Blue and White Album has really grown on me since I started listening to it. I give it a "2" for Repeat Listenability, but let's call it a "high 2". There are a few jewels here, and the overall album is head and shoulders above what I would consider par for a high school group. The group chose to create a very natural sounding album, with few production effects. The result is likely very close to what GFS A Cappella sounds like in concert.

The group members themselves are mixed male/female. The men are mainly in charge of vocal percussion and bass, with occasional tenor solos but oddly not much tenor harmony. The bass lines unfortunately often lack energy, and whether due to plodding arrangements or muddled singing, I'm not sure. Probably a combination of the two. Roxanne is one of the worst songs in this regard, with a continual "Ba-doomp. Da-doomp." from the basses. The women provide higher harmonies and a bit more than half the solos. The natural style leaves unresolved tuning issues from both genders scattered throughout the album.

Although I think medleys are great in live shows, I generally disapprove of them on albums. Imagine my surprise that my two favorite songs on the album are the final two tracks, and both medleys. I like Youtube Medley mainly due to the humor content, although the arranging is also pretty good. The song takes us on a quick tour of many viral videos from the past five or so years: Chocolate Rain, Never Gonna Give You Up, The Ultimate Showdown of Ultimate Destiny, Business Time, Miss Teen USA South Carolina, and Here It Goes Again (OK Go). I almost feel badly providing this list, because part of the fun for me on my first listen was wondering, "Goodness, what's coming up next?" The last two bits in particular cracked me up when I recognized what they were.

That Michael Jackson Medley turned out to be my favorite track really shocks me. As I mentioned, I'm not a fan of medleys and this one is nearly nine minutes long! But it really works. Leaving out the (in my opinion) overplayed and overrated Billy Jean and Beat It is inspiring. The songs in the medley are for the most part well-known but not over-covered ... they make me think, "Oh, I remember this song!" rather than "Oh no, not this song again." The arrangements are well done, each piece flowing nicely into the next, and the singing is also quite good. Wanna Be Startin' Somethin'" has the best soloist on the album, and her flips to the upper register are a joy to listen to. She could easily have done justice to a full-length version of the song. Anyway, the 8:48 just flies by. About my only complaint is the spoken Vincent Price section of Thriller — the echo in the voice is on too long a delay, making it sound like two separate group members are speaking. (Or perhaps two group members are speaking, in which case that's the mistake.) For completeness, here's the full song list: Human Nature, Man in the Mirror, Wanna Be Startin' Somethin', Smooth Criminal, Thriller, and Black or White.

The group uses good strategy in putting the strongest songs at the beginning and at the end of the album. The two medleys end the album on a very strong note. However, at sixteen songs, with many weak ones, the album feels like a yearbook effort. The two weakest songs in particular, In My Room and Fidelity, could have been left off completely. In My Room has some massive swooping between pitches which really distracts. My biggest complaint with Fidelity's soloist is her imitation of Regina Spektor's glottals ("beh-ah" for "better") instead of trying to put her own stamp on the song. They seem out of place. Another thing that seems out of place is Roxanne's line "I won't share you with another boy", sung by a girl.

In summary, these high school kids have a lot to be proud of and I heartily recommend the album to anyone in the market for high school a cappella. For such shoppers, it doesn't get much better than this.

GFS A Cappella is a coed high school group with a solid recording history, and if you look at reviews of its past albums here, the phrase "yearbook album" comes up over and over again. The group's latest, The Blue and White Album, is still exactly that, with sixteen (!) tracks clocking in at around an hour of music.

Still, not all yearbook albums are bad or boring to listen to, and this one has some good moments. Most of the songs here, taken individually, sound OK. Sure, there are some shaky moments or some awkward syllables here and there, but overall, the songs sound fine. Soloists here are generally good — not great, but good. The weakest link, surprisingly, is Maddie McFerrin (yes, related to that McFerrin), whose take on Roxanne is a little thin at times. I'm willing to give her a pass, though, because she arranged the song — it's not an outstanding arrangement, but it's the only one on the album done by a member of the group and not the group's director Allen Drew. And, strong genes or not, a good arrangement by a high school student is an awesome accomplishment.

The real issue with The Blue and White Album is one of monotony: these songs all generally sound the same. Drew has a very predictable arranging style, and a listener can tell even without the liner notes that these arrangements all came from the same pen, awkward syllables and all. Dr. Feelgood starts out with an enunciated "wah-na-nama nama"; that's a nice reminder that syllables that can be easily written down should be avoided if possible. But more than this, these songs are all basically the same tempo and feel, and song after song after song of that just grows tiresome. It's even worse still in songs with many repeated lines or choruses, such as Love Fool.

Finally, the album closes with two medleys, and neither is particularly great. Youtube Medley just strings a bunch of made-famous-by-the-Internet songs together (including a lengthy spoof of Miss South Carolina) with no cohesive transitions. While Michael Jackson Medley at least has a more unified vibe, the track is nearly nine minutes long and just feels interminable. The group's addition of two bloated medleys to the end of an already lengthy album just exacerbates the length of this album, making it feel more and more like a yearbook and less like an edited, strong, organized whole.

All that said, The Blue and White Album is a solid effort and does an excellent job of capturing the good sounds of this group. It is still a yearbook album, but as yearbooks go, it's a pretty good one.

To purchase a copy of The Blue and White Album, please contact Allen Drew at Allend@gfsnet.org. CDs are $15 plus shipping.