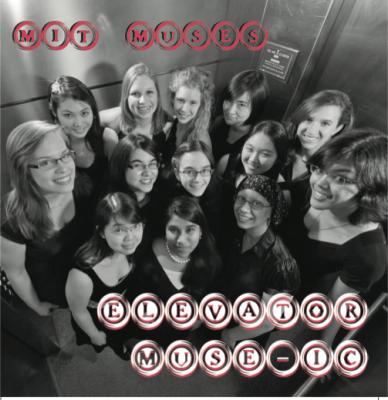 The Muses from MIT get an "A" for effort for their latest release Elevator Muse-ic. Though why would any group want to associate its music with that particular genre, even with the possibility of a pun-tacular reference? Besides, the name isn't a very appropriately titled one; I don't think that I would last a long time in an enclosed environment listening to this album.

Yet, I don't mean that entirely as an overall condemnation of the recording. It's an okay listen, but one that is mired in a lot of inconsistencies or not-totally-cohesive elements. Some of the production choices are a bit baffling, like deciding to overpower the soloist in certain sections for the sake of "dynamics". The arrangements tend to lend towards stratospheric screeching sopranos. See track three Shadows for a perfect example — if your ears make it past the introduction. And there is a pointed lack of depth in the maturity of sound and ability to hold pitch in the soloists, as in Foolish Games. These qualities don't make for a very soothing listening experience.

The recording is one of those take-it-or-leave-it affairs. It is a slightly less than that average collegiate soundspace, but not weak enough to grant it a "2" in my opinion. The ladies are good singers even though the outcome of their collective work isn't all that pleasing. The arrangements aleternate between having a creative flair to being unabashedly plodding and jejune. And the song selection has enough bright spots that the standard female fare is interesting enough.

For example, the album opens with a high-energy take on C'est La Vie, and yes, I was really hoping that it was Robbie Nevill's hit of 1986 and not the party anthem of that Spice Girl wannabe group B*Witched. But in the middle there is a highly amusing "tweedling/doo" passage that made me laugh out loud. No, not in a good way.

And that song just emphasizes the lack of emotional warmth in the singers' palettes. Everything seems airy and without a lot of gusto. And considering some of the ballsiest music out of the a cappella canon is coming from female groups ... you can't really hang without giving it some of that extra oompf.

But on the flipside, when the singers just kind of lay back and sit in the pocket ... there is a richness that is breathtaking. I loved To the Moon and Back and Gravity. The group's final track Do You Want to Date My Avatar, which is particularly appropriate for a technical school, grooves along pretty nicely as well. It's definitely a fun and kitschy way to end the album.

The Muses were "lucky" to produce an album that had a bunch of little flaws that were not enough to make Elevator Muse-ic totally unbearable. Focusing on more alto songs, listening to the album with a critical ear instead of the usual "can my part be heard?" mentality that all of us non-professional groups can fall under when producing an album, and investing in some more gutsier arrangements that form a tighter and more grounded sound could take the Muses from the ground floor to the penthouse.

Elevator Muse-ic is heavy with fragility. The soloists sing on wobbly legs, the backgrounds sound timid and young, there isn't much music worth hearing, and the engineering is overreaching to compensate for it all. Sorry to lay it out there up front, but it's hard to miss.

The solo roster for Elevator Muse-ic is shaky and unconvincing. Some leads sound really scared (Love Story). Some sound too little (Foolish Games, Fidelity). Some sound occasionally lost (Shadows). I'm not really hearing a single standout, which is unusual for a large ensemble. This sounds obvious, but being a good performer means being a good actress, one who can really capture an audience's attention with some facet of her talent. For starters, these soloists must master the fundamentals of breath control, because true vocal lines are few and far between.

This is also an album of sonic extremes. It's like we either get a deep monster of a mechanical fake bass, or a high and painfully squeaky soprano section; and sometimes, both at once. Clearly, the production is hiding a lot here. (And adding a lot here. I guess that can't possibly be a keyboard on Love Story, but it's not far from one.) In particular, very peculiar and extreme Shadows earns low marks because of its poor arrangement choices complete with a choir that sounds like tiny mice singing back-up for the track. A more natural, more pleasantly rich sound throughout Elevator Muse-ic and future albums would be most welcome.

But yet there is endless potential for the Muses. For starters, I hear it loud and clear on Fidelity. Creating the music here is a background with dynamics, sensitivity, a natural build to the climax, big hard-hitting vowels with intensity, and a group that sounds confident and happy to deliver. The soloist is holding back too much, but that of course adds to the potential factor. The arrangement for So-Lo (a John Clark contribution) and the way the voices artfully sculpt it to life is also promising.

I urge these ladies to listen critically to the highs and lows of Elevator Muse-ic and discuss their goals for the next album. If every new track makes it at least to the level of Fidelity and So-Lo, that's a fine start.

The Muses are an all-female group from MIT. We all know the MIT stereotype — and the ladies live up to it to some degree with their song choices of The Geeks Get the Girls and Do You Want to Date My Avatar. Buying into the stereotype, I somehow expected this album to be full of high-tech editing, autotuning, sampling, and so forth. It's not. At all. There's an octavized bass and edited vocal percussion, but that's about it. The human element shines through, and many of the songs are full of energy. That human element is the biggest strength of the album, and it really helped me to connect to the Muses' songs.

However, there are many issues with the album that I can't overlook. Some of them could have been helped by a more professional editing job. For example, there's a strange glitch in the vp rhythm at the end of Fidelity as the group tries to slow down together. Many of the songs have issues with the blending between the soloists and background, such as the background parts being too "in your face" in Fidelity. And there are too many spots where the intonation is just a bit off, usually the soloist more than the background parts. Those should have been fixed by either re-recording the solo track or (perish the thought) auto-tuning.

Speaking of the soloists, this is unfortunately the weakest area of the album. Aside from the soloists' intonation issues, which are persistent throughout the album, the soloists do not take command of the songs and demand one's attention. Notice to all collegiate groups: if you're going to put Gravity on your album, you need to have a soloist who at least will not be completely eclipsed by memories of Sara Bareilles' original. The single bright spot for leads is Do You Want to Date My Avatar, where the soloist is right on pitch and is able to continually flip up to her upper register as the song calls for.

Another area that needs improvement is song arranging. Many of the arrangements here are fine, but several could use some revising. Background syllables of "jehna jen" and the like really stand out in To the Moon and Back, Shadows, and So-Lo. The two-part quick rap in the middle of Do You Want to Date My Avatar doesn't work at all (yes, I know it's in the original...). And there are some parts that overemphasize repetitive block chords — Love Story is probably the worst such offender.

In short, this is not really an album the general public should consider purchasing, but fans of the Muses may get a kick out of it.

To order a CD, send an email to muses@mit.edu