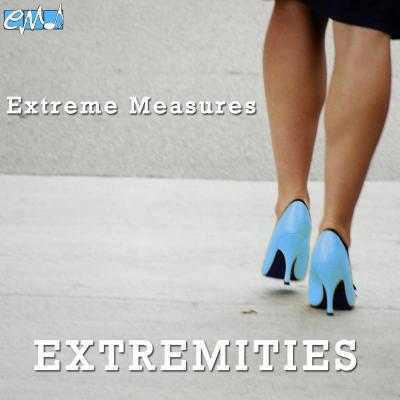 Extreme Measures likes to sing aggressively and favors harsher '90s aca syllables, and it's got the leads to pull this off. The rookie downfall here is not musicality-related, as it so often is with first releases, but arrangement-related.

For any album, these soloists are terrific. For a debut album, these soloists are priceless — having this roster at the start of Extreme Measures' studio journey is a huge asset. A lot of groups look back on first releases with a little "meh", maybe even a little shame. But when you've got leads that sound like confident stars, as everyone can clearly hear on Extremities, you're starting worlds ahead of other start-ups. My personal favorites: Kevin O'Toole's vocal command and sauciness on Everybody Loves Me, and Meghan Kerwin's total dominance on Ignorance.

If Extreme Measures can advance its arrangements to suit its awesome leads, it'll be the full-on real deal. Opening with killer Breathing creates a world of sonic and arrangement mastery — angry but clean, high energy, dense hard rock. And it's a world that's never again shown on Extremities. If EM wants to keep up its favored "jen jen!"/"dah dah!"/etc. business, I suppose that's all right if the group keeps sellin' it. But please don't come close to filling up whole songs with the same vocal and chord patterns (Brand New You, The Call), or just keep them in your live show rotation if you want something easy and reliable. The songs on Extremities aren't basic barbershop, and they're not familiar anthems; if your fans can easily just sing along with the parts, you haven't created enough interest yet. Songs should evolve; not just grow louder, or busier, but actually evolve. Songs have personalities, and a singer's job is to showcase the nuances. There aren't enough nuances here. Case in point: I have a feeling that EM could reinvent While My Guitar Gently Weeps into something legendary if it let go of the literal.

The last track is a bit of a puzzler. The Sound of Silence claims to be live, but one can hear little cuts when wearing 'phones. The "polishing" isn't smooth, and it doesn't serve the lovely vocals.

Finally, if first impressions still count, the physical album doesn't make a great one with its presentation. The logo looks like bad clip art, and the whole package just looks cheap. Ideally, the packaging represents the good musical product within, and there's a lot of goodness to this music.

There's mega potential here. I hope Extreme Measures nails the next one.

Extremities is the first album from Northwestern University's mixed group Extreme Measures. The group avoids a lot of rookie mistakes: most importantly, the album has a lot of energy, which goes a long way toward making it fun to listen to. Also, these singers tackle a very manageable ten songs here. There are two arrangers (group members Andrew Kim and Alexi Kovin), so the songs here have a consistency of feel and tone throughout, making Extremities feel cohesive.

However, cohesion does not always mean excellence, and there are also some repeated issues throughout this album. First and most importantly are the group's syllable choices. There are lots of "dah"s and "doo"s and "dm"s here, plus some "junh"s and "jah-dah"s thrown in for good measure. Syllable choice isn't an easy thing to master, but Extreme Measures' syllables (combined with the sound of the recording) have a harshness to them that makes the music difficult to listen to at times. The opening of Ignorance is way more severe than Paramore's original, and the very coarse consonants in the beginning of The Voice Within really disrupt the smoothness of the pretty chords. The one song where these syllable choices actually work is Brand New You, partly because it is a Broadway tune. I'm usually not a fan of Broadway songs in a cappella, but these jazz-hand-like syllables surprisingly complement the song.

There are also some stylistic choices that are difficult, centered mainly around the soloists. There's an absurd amount of vibrato on Are You Happy Now?, and it sounds as though the soloist here can't hit the high notes. The soloist on Ignorance has a wailing shrillness that's exacerbated by the fact that the song feels several hairs too slow. Even beyond the soloists, the recording and production here just sound harsh, and that makes the album difficult to listen to a lot. The one exception is the final track, a live recording of The Sound of Silence. It's unclear whether this was recorded live in performance (there's no audible audience noise) or live in the studio, but the song has none of the issues that I've cited above: the recording is smooth, the syllables are gentle, and the soloists sound good on their respective parts. I'd love to hear more recordings like this from the group in the future.

My biggest frustration with this album, though, is the lack of innovation. These songs feel like carbon copies of the originals — from the randomly shouted "hey!" in the chorus of Ignorance, to the whooshing guitar tone on the second verse of Are You Happy Now?, to the phone-ringing and "hello?"s in the middle of The Call. Yes, it's easy to imitate the original, but a simple transcription isn't all that engaging for a listener — after all, if I want to listen to a really, really awesome version of a Christina Aguilera song, I'm probably just going to bust out an Xtina CD. Extreme Measures is off to a pretty good start here, but there's still a lot of room for this group to grow.

The arrangements on Extremities almost all sound like B-sides from an Off the Beat album from three or so years ago. "Bell" tones on "zha" (in quotes because what bell have you ever heard sound like "zha"?) and lines of screamy "jin jin jin jin joh nah" are the norm, with any legato singing coming in sounding like afterthoughts, which isn't helped by the fact that the singers are tuned to inhuman tightness and fill nowhere near the space that they would have had they been left a bit looser. Oddly enough, The Sound of Silence is the only arrangement I truly enjoy on the album, because I'm not being constantly distracted by syllable after attention-grabbing syllable.

On top of this, every song is sung with the same punch and bite. This is clearly an energetic group of singers, and the commitment to all of their songs is impressive. That said, it's not always the appropriate commitment. While My Guitar Gently Weeps is probably the best example — the word "weeps" is in the title, and yet the backs are singing like they're performing a power ballad by Whitesnake. If you're going to sing a sad song, you have to sound like the character you're portraying — in this case, a forlorn, downtrodden lover. Here, I feel like I should be seeing the lead sitting on a soundstage wearing a leather jacket with a Michael Bolton wig. Cue the giant '80s drums and roto-toms and you have something worthy of Sting and Bryan Adams coming in for a trio.

That said, I'm not confident there are enough men in this group to fill out such a trio. The liner notes list an equal number of men and women on the album, but I'm convinced that the only people singing on some of these songs are one bass, two altos, and four sopranos that sound like they shouldn't have their learner's permits yet, let alone be singing in college. I realize this sounds harsh, but I actually can't comprehend some of the sounds coming out of these people. I take less issue with the voices themselves, though, than how they're treated in the mix. The women are so incredibly overpowering that it's hard to tell that there's anything between bass and alto in these songs, and the sopranos are like icepicks to the ear at their worst.

Leads are similarly pingy to the point that I had to take a break after listening to The Voice Within. Soloist Carly Cantor can sing, but I can't help but feel that something has been done to her voice that makes her vibrato seem uncomfortably wide (it's not, actually; it only spans a whole step), and her straight tones sound like a laser. I have a similar gripe with all the solos on the album, but particularly Sophie Rich's lead on Are You Happy Now? Her voice is not particularly well-suited for the song, but the same issues I have with Cantor's lead are even stronger here. It may have to do with the fact that it sounds like most of the audio, especially the leads, is compressed way too hard for my liking — a lot of the nuance of the leads is eschewed in favor of loudness.

Most of the problems I have with this album would likely be alleviated by addressing them before the group stepped in front of a microphone. I can tell this group can sing powerfully, and with pretty good technique. I hate to harp on the same thing over and over in all of my reviews, but I will until every album I hear doesn't need it said: sing the songs. If you have a song about introspection, sing like you're conflicted. If your song is about aggression and anger, by all means sing with intensity. It's when you start mixing and matching singing styles with song styles — unless it's a conscious, thought-out and intentional execution — that your songs become nothing more than recitation of sound. Make me feel something and I'll be more inclined to listen.