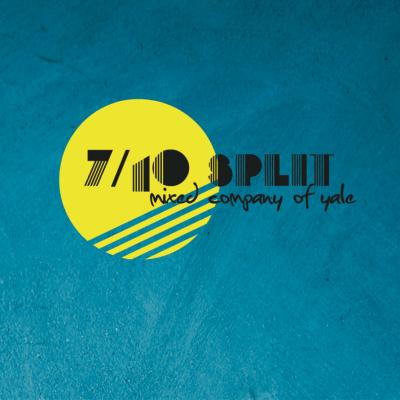 While collegiate groups are often plagued with consistency issues, Mixed Company is — sadly — not. While the title 7/10 Split is explained in the liner notes as deriving from the inclusion of ten new arrangements (including one original) and seven "returning classics", the end result is an album that has plenty of length but is light on substance.

The top-notch production credits across the board (Overboard, Boyer, Sperandio) ensure that the music all sounds reasonably polished and in tune, but the problem is in the musicmaking choices themselves. Mixed Company's brand of contemporary collegiate a cappella is certainly pleasant, but it's just too simplistic and unimaginative to hold my interest beyond a song or two.

At first, opening the album with the inane Lollipop was baffling to me, but in hindsight it makes some sense. This is a sparse song to begin with, and so Mixed Company's overly square and straightforward approach is particularly well suited to this cover. And yet, even in attempting to replicate the original, the group comes up a bit short as the abrupt piano hits of the original are rendered too legato and the different instrument timbres from the source material that add variation don't find a vocal equivalent in the a cappella arrangement.

To Mixed Company's credit, the group has some strong and passionate solo voices. I can't say they are all great voices, but they definitely are fond of emotive singing; and when contrasted with the generally blasé background block that is the group's norm, they tend to pop out all the more. I do wish there wasn't such a palpable nasality to the belt in several of the female soloists (I Wanna Dance with Somebody (sung like "some-buddy"), Ain't No Way, Taking Chances) but they certainly can riff and wail even if I generally found it a bit too much. As for the men, there is no standout, but the choices do include two songs originally performed by women (Teenage Dream, Someone Like You), the latter of which repeatedly avoids the original melody line as sung by Adele (on "Don't forget me, I beg, I remember you said...") and uses some chord substitutions that re-harmonize the song in a fashion that would be called neither faithful nor jazzy. Indeed, it just feels plain wrong.

At the end of the day, though, I may be wasting my breath. Mixed Company has been around for 30 years, so they clearly have legions of dedicated alumni and fans who continue to enjoy listening to them sing what they sing how they sing it. They continue to favor far too basic arrangements for my tastes and continue to re-record songs they've recorded one or more times before. That's their recipe and they seem to be sticking to it. Good on 'em. For you as a consumer, however, you needn't check out 7-10 Split. Unless you're a proud relative or friend of a group member, it's more like "10-4, over and out".

Over an hour long with lots of beloved covers and a surprise original at the end, 7/10 Split most certainly has something you'll appreciate and come back to. For me, it's less about the song selection (a few works here certainly didn't need to be recorded), and more about a novelty in collegiate a cappella: a heavy catalog of arrangers that arrange both sensitively and boldly. Add in some soloists that really made me think about what it means to lead a song, plus Mixed Company's charming family-like history and traditions, and hey, the a cappella world has a compelling offering in 7/10 Split.

I was challenged early on to pay special attention to the leads in Mixed Company. Track two is Adele's Someone Like You, covered by a male here (Jake Eliasberg), whose audible vocal vulnerability and creative styling made me feel like I was hearing this smash hit for the first time. How rare is that? This is followed by I Wanna Dance with Somebody, obviously made famous by the late songbird Whitney Houston, which makes the soloists ever more noticeable. Here, Elizabeth Dervan is a graceful workhorse who captures the necessary belting and range the original demands. The intensity only continues with Steph Brandon's acrobatic take on Ain't No Way, which mighty Aretha Franklin brought to light. Either Mixed Company didn't get the message to avoid covering legends, or it did and knew it didn't matter because the singers all had the chops to put their own stamps on such songs. You go, Mixed Company! I'll finish these accolades by mentioning the next track, Teenage Dream, covered by a captiving male (David Martinez) whom you can't help but sing with.

Production is light, including on the vocal percussion; another treat, since musicality is enhanced instead of digitized. Arranging is a high spot on 7/10 Split, and light production only helps us hear the many nuances and thoughtful touches intertwined in the music instead of being compressed away (even though the blend isn't the tightest this way). My runaway favorite is Taking Chances. The entire song is a glorious demonstration of vocal control and story build, but in particular 0:55 — 1:35 is totally musically ridiculous. I actually shivered from goosebumps the first time I heard the way the layering dissonant arrangement weaved in and out of Esther Hyun's gorgeous solo. Not that I should be saying something so sacrilegious, but I bet Ian Janer's arrangement of Taking Chances sounds stunning played on a piano. Janer's version of Two Points for Honesty is beautiful, too.

Since this album's long length is questionable, I'll state that tracks ten through thirteen could have stayed in a live rotation and I wouldn't have shed tears about it. Tight editing always gives an album more polish and staying power, even if most fans will just save the tracks they like to their digital devices. Those Magic Changes is just too cheesy to stick around, Danny Boy and Once I Had a Sweetheart are out of place, and Walking in Memphis offers nothing fresh. Everything really aligns again with If I Were a Boy, featuring the crazy range of Chloe Sarbib, and ends with the inspirational scholastic original Prayer by Ms. Hyun.

The lane has oily patches on 7/10 Split. All the same, there's still a lot to enjoy.

Mixed Company of Yale is an a cappella group in need of an editor. 7/10 Split isn't a bad album, not at all, but it's overfilled with material. Seventeen tracks on an album is pushing the limits if you don't have some kind of connective tissue running through your album; seventeen unrelated covers is enough to try to patience of even the most benevolent a cappella listener.

I don't want to get too negative; there are a lot of good things on the album. The production lets the voices take center stage, and I don't miss the auto-tune or studio bells and whistles at all when a group is able to sing in tune, in time. Soloists have some standout moments: Steph Brandon's solo on Ain't No Way is complex and moving without ever aping Aretha, and McKay Nield embodies Mika's sass without subjecting us to a caricatured imitation. The group blends very nicely, with particular attention being paid to the inner voices, which form a great harmonic pad to support the action in lower and upper registers.

Arrangements are fairly standard a cappella fare, with clunky syllables making their seemingly requisite appearance on most of the tracks. Simpler, gentler moments don't always land in these arrangements either — soloist Jake Eliasburg sounds strong enough throughout Someone Like You, but when he's forced to sing completely alone, his voice shifts from "vulnerable" to "shaky and unsure" quite quickly. The timbral characteristics of the soloist's voice need to be considered when writing the arrangement, and adjustments need to be made before recording if something isn't landing.

I'll return to my earlier point: 7/10 Split could stand to have some of its fat trimmed. It's not an easy process. I wish I could point at five to eight songs that were just awful and dragged the album down. I can't do that because everything on the album is redeemable and should have been recorded at some point. When planning and creating an album, the group and producer have to figure out what the logical emotional and musical progression needs to be; this means that sometimes perfectly good songs get scrapped because they don't add to the album.

I applaud Mixed Company of Yale for approaching contemporary a cappella music in a way that showcases the power and versatility of the human voice, but 7/10 Split doesn't hold up to the stronger albums that have been released alongside it.

To order a physical copy, email mixedcompanyofyale@gmail.com. Electronic downloads are available on iTunes.