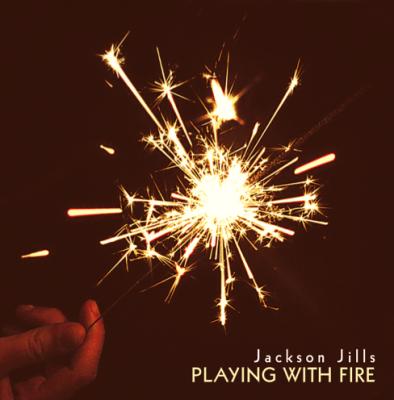 The Jackson Jills have a long tradition of being powerhouse performers and top notch recording artists. Playing with Fire doesn't tarnish the reputation of this all-female group from Tufts University in the least. The listener experiences this constant level of success by noting the fact that the 18-month recording process was by three different sets of Jills. And as with many collegiate and CAL groups, the whole sound of the group can change drastically with each graduation period or job transfer. But without having looked at the liner notes, that piece of recording trivia wouldn't have been known because of the nearly seamless transition between the groups.

On the other hand, the album doesn't do anything to push the ladies farther up the totem pole of respect, or propel them to the front of collegiate a cappelladom either. In fact, Playing with Fire is a fairly middlin' album. But what it does reinforce is that even with a less than outstanding product, the Jackson Jills still sing and record better than ¾ of the a cappella community currently creating compact discs (and digital singles).

From the liner notes the Jills state:

"To us, Playing with Fire is more than just taking risks. It is growing and exploring, falling down and getting back up, challenging ourselves, and getting a little messy. Together, these experiences make up the heart of our album — a testament to our gusto and drive."

What a noble and heartfelt statement — a perfectly humanistic definition of an emotional concept, but not at all what the group accomplished with this recording. And that assessment comes after the most amount of scrutiny with the least amount of cynicism and snark that I can muster.

Where are the risks? Is it daring to combine Halo/Already Gone into an easy, but really effective mashup? Is it daring to open up a secular album with the really aggravating song Unbreakable by the Paramore rip-off Christian group Firelight? Maybe it's risky for women to sing songs originally sung by men like Forget You without changing the pronouns? I simply can't grasp where the challenges are that the ladies had to overcome. The resulting album is more like being on a precipice over a pool of marshmallow fluff, when the artist wants you to think that the pool has been filled with molten lava or deadly piranhas. Their pathos is a bit overblown.

There are sweeping moments throughout the ballads that can take your breath away. And when a powerful drive is called for, like in the opening track Unbreakable, there is enough chutzpah and bravado to really carry the message home. The arrangers know how to utilize the singers' voices extremely well, though some of the syllable choices are suspect (lots of "dan-na"s and "jin jow"s which elicited a few chuckles).

The production is superb; bouncy and electric at times, subtle and nuanced at others. The drumming is always in the pocket. And the blend is just short of stellar. But there is something missing. Conviction by the soloists isn't necessarily it, but some of the stylistic choices, especially on New Morning, don't help matters. The music and album are pretty good, but the Jills just didn't create a whole recording that I enjoy listening to.

If you are the adventuresome type (the type who goes to Adventureland at Disneyland for thrill-seeking), then by all means pick up a copy of Playing with Fire. You may get a bit of soot on your shoe, but that's about the extent of the damage suffered from playing with this fire.

The Jills' latest effort, Playing with Fire, is sadly inconsistent and leaves me wondering "What if?". The highs are high, but the lows are low. And much of the album is just average.

In case you can't tell from the name, the Jackson Jills are an all-female collegiate group. In the first song, Unbreakable, the ladies attack the song with fire and gusto to deliver a gripping performance which commands one's attention. The rest of the album unfortunately doesn't keep up this same energy level.

The album continues with Say (All I Need), a much more subdued song. It's good, but the slower/sweeter style allows some of the chinks in the Jills' armor to become visible, most of which continue to be issues throughout Playing with Fire. For example, the soloist is good but not great. There's a slight harshness to the production — the singers are all in tune, but somehow the soloist/backgrounds still don't quite blend together. Nothing about the arrangement really grabs my attention. As the album continues, most of these items remain issues for me.

The lowest part of Playing with Fire for me is Forget You. I realize that I have a relatively low tolerance for profanity, but this song is completely beyond the pale in this respect. I do most of my music listening at work, and the song is in no way, shape, or form "work safe". (Not at my work, anyway.) While the Jills do use the modified "forget you" instead of the "F-word you" in the Cee Lo original, they certainly don't scrimp on the "s-word"s. Over and over and over again — ten times in total, at six different places in the song, if I'm counting correctly. Memo to groups: while yes, you should be free to express your artistry in any way you want, realize that there may be a price to pay. The price in this case is that some of your listeners — such as myself — will hate the profanity. Really detest, as in "I can't stand the song", and as in "I'm deleting the mp3 file from my hard drive as soon as this review is over". Enough about that.

Back to a high point: Club Dynamite. This starts off gently, managing to avoid the harshness that plagues most of the album. The tune is somewhat familiar, but I can't quite place it ... then when the beat starts forty seconds into the song, I think "I know this song!" It's a cover of Taio Cruz's Dynamite. One minute and forty seconds later, things switch abruptly to Flo Rida's Club Can't Handle Me, and I realize that the first forty seconds had been a vastly slowed down version of the Club Can't Handle Me melody. I think the melding of the two songs is deftly done.

Overall the album is about average when compared to most of the collegiate albums I get to review. There's a lot of good singing, but the soloists' voices are often harsh which prevents blending with the other singers. I'm not sure if that's due to production or singers, but I'm guessing it's a combination of both. Without compelling soloists, there's not enough else on the album to turn it into a "must have". I recommend it for fans of the group, but not for a cappella fans in general.

Unbreakable is a thrilling way to start an album. It's a cappella to the extreme. It pushes the group to its limits and the result is outstanding. Listening to it, I couldn't wait to hear the rest of Playing with Fire. Unfortunately the rest fails to live up to the energy and boldness of the first track.

This album is pretty well arranged, sung, and produced, but after the first track the songs are not diverse enough to stay interesting. Say (All I Need), Time, Broken Strings, New Morning, Halo/Already Gone, and Winter Song are very similar in terms of tempo, character and style, groove and arrangement, texture, and dynamic. All but one of the songs on this album were arranged or co-arranged by Hannah Shefsky. While this makes for a consistent group sound, the songs are just too similar. Most of the album sits between mp and mf. And everyone is singing all the time so the texture is always thick. Any change in texture, perhaps a little silence or break in the backs, would go a long way toward fixing the monotony.

Helen Corless on Unbreakable and Amanda Garces on Forget You are the standout leads, and I would have loved to hear them on more than one song. Amanda provides some much needed energy and personality to the second half of the album.

Dance music is hard to do well a cappella. Club Dynamite, a combination of Club Can't Handle Me and Dynamite, struggles because neither song has much substance musically, the soloists don't have the presence or interesting vocal timbres of Flo Rida and Taio Cruz, and the vp is bland. There is also significant vowel distortion due to autotuning in Club Dynamite and New Morning. At least in Club Dynamite it's in the backs. But every time the soloist in New Morning sings a melisma on "morning", there's nothing for the distortion to hide behind.

Medium songs (in terms of tempo, dynamic, intensity etc.) make for average albums. Bold choices make for interesting songs. Unbreakable is great, but nothing else resembles it. I hope the Jackson Jills look at what makes Unbreakable so good, and then try to sustain that energy and fearlessness for the entirety of the group's next album.

To order Playing with Fire, visit the iTunes store or www.jacksonjills.com.