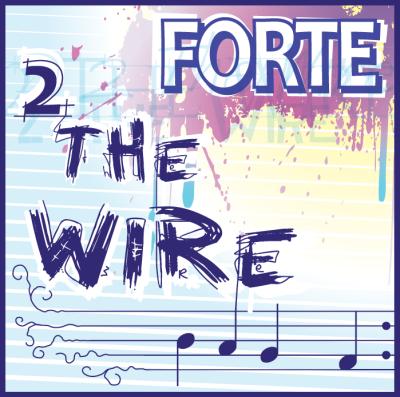 Obviously Centerville High School is in a wildly supportive community for the arts — over 150 funders are listed in 2 the Wire's liner notes. (!) This giving resulted in a professional product to represent Forte's music, but more impressive is the work that Forte members themselves put into this album: these teens are holding their own.

So we know Forte is good at fundraising. The group is also good at networking, having been around just shy of two years and already hobnobbing with a plethora of solid outside arrangers and engineers who helped bring 2 the Wire to light. But it just never gets old when RARB gets to hear high school a cappella groups sounding rather like the collegiate groups they surely enjoy: if Forte is singing this well with this level of group chemistry in high school, we can surely expect these singers to be a cappella innovators in college, right? Secrets is a particularly strong and promising track for continued success: an engaging arrangement with an appropriate close-up recording style, a great lead from Kendra Huhta, fabulous balance and blend, and underlying shining musicality. I also enjoy the group's take on Hey Soul Sister, sung here re-imagined into a tender slow-jam ballad.

Overall, the group tone (always a sticky point when critiquing still-developing voices) is about what you'd expect for a good high school group: the females sound slightly more mature than their male counterpoints, sometimes sections get too thin, but the joyful youthful energy is always present. It's nice when we get to hear some exposed bass in the mix (the bass section is featured for a bit in Just the Way You Are, for example), because it's telling to know the root support is solidly in place. And the vocal percussion by group member Charlie Arthur? Quite impressive!

Really, the only track that feels in-progress to me is To the Wire Dance Medley. As presented, there's not enough sizzle or interest in the arrangement to dance to this one as instructed. Perhaps some doubling in the studio could have filled it out more, but fundamentally, it's the arrangement. Medleys are hard to pull off, period. And as a general rule, the use of a "Bonus Track" is often a little kitschy, but with Gravity, the concept is employed perfectly: a track with guest artist Jessica Freedman of Sonos on the lead. (A bonus indeed.)

Executive producer Ben Spalding deserves much praise for this release (and he should also be listed as the group's school director in the liner notes). His collegiate a cappella roots certainly helped shape this fine listen. Congratulations to Mr. Spalding and his happy troop of a cappella singers for this solid release!

Forte is a mixed group from Centerville High School in Centerville, Ohio, and 2 the Wire is the group's second album. There are some things about the album that are very typical of a high school group (the tracklist is flooded with contemporary Top 40 hits: Taio Cruz, Katy Perry, OneRepublic, Bruno Mars, Adele, Train, etc). Despite the predictable song choice, 2 the Wire is a really solid release: tuning and blend are great, and the arrangements are both appropriate to the group's abilities and well-executed.

But there's more to music than hitting the right notes. What's sometimes missing here is feeling. Some of these songs feel a hair too slow (the Tik Tok part in To the Wire Dance Medley in particular drags a little bit), which saps energy from otherwise peppy tunes. Elsewhere, it feels as though the soloists are more focused on notes and/or emulating the original than on connecting with the audience; Firework and Jar of Hearts are both somewhat sterile. These singers are technically solid; I just wish they'd let loose a little bit and really embrace the song — take a listen to the difference between the album version of Gravity and the bonus version, with a guest solo by Jessica Freedman from Sonos. The album version is quite good, but the bonus track shows the magic that can happen when the technically precise, beautiful background voices of Forte combine forces with a singer who delivers an emotional solo.

One of my other frustrations with 2 the Wire is an aesthetic choice the group makes with its soloists: not counting the medley, half of the songs on this album feature two soloists. This change-up makes for an awkward listen — especially when switching between a guy and girl lead (Dynamite, Just the Way You Are). If the group doesn't have a soloist that can handle a particular song, then it should pick different songs. If the group is just trying to spread the soloist wealth in order to give everyone a moment to shine, then have a discussion about group goals: is it better to give everyone a chance at the spotlight, at the expense of a cohesive listening experience? Or does the group want to deliver an album that will make listeners stop in their tracks because of how darn good it is — in general, not just "it's good for high schoolers"? Forte has a solid foundation here, and it certainly wouldn't take much for it to achieve the latter.

Right off the bat, I have to point out that 2 the Wire is unique in that it is available in digital format only. This choice was a smart one on the part of executive producer Ben Spalding. With the right organization of digital liner notes and iTunes formatting, it is far more user-friendly in the age of the smartphone.

The best part of 2 the Wire is the solo singing, hands down. There's no denying it: these kids are talented. Most of them hit the notes with ease and beautiful tone, but many of the leads sound shy and fail to communicate any real emotion. On top of this, there are very few male soloists showcased. Dynamite, Secrets, Just the Way You Are, and Breakeven all feature female soloists where the original soloist was male. This change is particularly jarring in the Bruno Mars track, where the switch from male soloist to female in the chorus breaks up the continuity of the lyrics.

Where 2 the Wire falls short is in its dynamic range. Many of these songs are unnecessarily busy or loud — particularly Jar of Hearts, which begs for soft angst, or Secrets, a dynamic song that relies on build for its drama. Others, like Firework and Dynamite become boring and repetitive by the second chorus. Hey Soul Sister, arranged by Ben Bram, is a pleasant departure from this pattern. Its soft sweetness is a welcome innovation from Pat Monahan's original.

Each track is expertly tuned, nearing too much at times. The pristine blend and fine-tuned backs are the sole reason to take another listen. There's not much to return for in terms of creativity. There are, of course, a few gems. Kathy Hoye's and Jessica Freedman's fun take on Rolling in the Deep is a perfect example of an arrangement that maintains the integrity of the original song, but adds something new to keep the listener engaged. A bit more of this risk-taking next time, and Forte could really have something special.

Forte has a lot to be proud of; the group delivered a nicely produced album of fun covers that will delight families and friends. Next time, it should raise the bar and strive for a bit more artistry and originality.