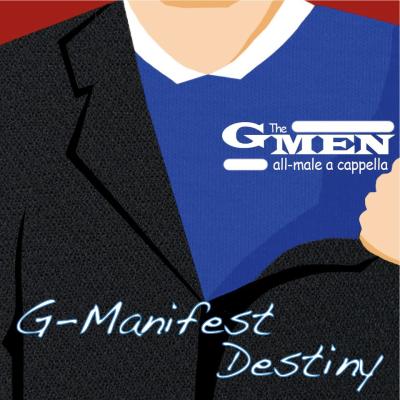 G-Manifest Destiny has the familiar feel of staid quality polished to above-average luster, like a fine a cappella recording to which the engineer has applied the usual presets. There are few surprises on this album, but post-collegiate upper-voice males will enjoy it nonetheless, as G-Manifest Destiny is an album anyone could sight-sing — I mean sound-sing — along to.

On G-Manifest Destiny, the G-Men have a voice, a sound of their own. That sound is spacious and creamy. Each song uses the full range of voice, pinning high tenors up top and anchoring with solid bass. The songs breathe nicely, with plenty of room for all eighteen voices on the album. The arrangements suit this treatment of the tracks, with a lot of big-chord ensemble singing.

Of course, there's a price to pay for creamy, spacious soundscapes. As is true of many a cappella albums these days, the album feels normalized, compressing dynamics into a narrow band that any chamber singing group would find monotonous. Most songs sound about the same volume, start to finish. The compression tends to muddle the soloists on ensemble songs; I prefer to hear more separation between soloist and backing voices. This compression also leaves the downtempo songs with a lot of untapped potential. The group missed chances to inject some energy into Predatory Wasp, Mykonos, and Summer Sun; Yesterday and I See You benefited from more dynamism.

The G-Men sound best when they're trying a little harder. They clearly put more time into Justin Timberlake's What Goes Around.../...Comes Around and LoveStoned, both of which feature high production value percussion, bass treatments, and well placed special effects. They're modern and fun, though the soloist personality feels a little flat.

Summer Sun is a pleasantly sleepy choral song until the G-Men bust out a Beelzebubs-like bridge, riding the soloist's rounded, soaring turns up and up. More, guys! Soar higher, louder, and take us with you!

Ladies' Choice has good energy, in a squeaky clean Bo Diddley kind of way. The soloist pushes things on top of a boppy, House Jacks-style arrangement. I could use more swagger, given the theme of the song, but let's not ask too much from an album that features a teddy bear in the liner notes.

I See You is nicely performed all over. The song builds from intro through the bridge. The soloist's smokey tone and urgency keeps my attention. There's variation between verse and chorus, with good builds and transitions joining them. The R&B perc is clean and in style. The mix of high voices on "ah" against the "bum" baritones is an ideal blend of texture and distance.

I have strong feelings about any cover of Predatory Wasp, since the Penny Loafers' interpretation on Prophets & Pawns is one of my all-time favorite a cappella recordings and one that gives me chills and moves me from the gut every damn time I listen to it, even tonight as I compare it against this lukewarm version. I'll admit it's a tough song to perform, but Sufjan Stevens covers must maintain an organic feel. Rather than building seamlessly into each other, this recording feels like pieces. This version feels mechanical and relies too much on the heart-felt authenticity of its lyrics — and a commendably sensitive interpretation from the soloist.

G-Manifest Destiny is a fine album, elevated by the studio. The G-Men have their sound and a few original ideas. The challenge for them, as for so many recording artists, is to strive to capture energy despite the studio's tendency to make everything sound kind of the same.

G-Manifest Destiny is a wildly uneven album, and as a result one of the most challenging reviews I've had to write this year. I struggle to think of any album from my past listening that has taken me from "wow!" to "what?" so quickly. There are a good handful of things to praise here — things that are not just good, but actually hint at game-changing potential. Sadly, as a full album, G-Manifest Destiny comes off as business as usual, punctuated, both confusingly and frustratingly, by flashes of brilliance.

To me, LoveStoned epitomizes what is so maddening about this album. The arrangement takes a ton of liberties with the time, groove, and the original chord progressions. Some are really cool and interesting, some feel really unnecessary, but they all just feel so random. Why does the solo come in a beat early in the first verse so that the lead groove is a little unfamiliar? The style of the song isn't all that different, so why make this major change? Who thought of the electro remix at 1:43? That part is awesome! But wait, now why are we going back to the original groove for the chorus?! The feel we just had in the verse was so cool, and this is boring again. Now for the breakdown we've segued to a new sweet Latin-flavored groove? This is sweet, too! Why isn't this groove featured more in the arrangement?! Why use the original feel at all when you've got ideas this good?

Such is the experience of this whole album. I find myself constantly asking "why?" Why drop a beautiful, atmospheric track like Mykonos, and follow it up with a by-the-numbers arrangement of Boyz II Men's Yesterday (minus the soul that made the original work so well)? Why make me sit through a track as vanilla as Touch Me when you've got an idea as beautiful as I See You which upgrades MIKA's grating falsetto to Brendan Asante's gorgeous baritenor? Seriously it's one of the best solos I've heard this year, mostly because his voice is so perfectly matched to the feel of the arrangement. But now why end with the so-so Sway? Why? Why? Why?

I can only speculate, but to me G-Manifest Destiny reeks of a group trying to preserve too much of its live show on record. Tracks like Touch Me, Sway, and Yesterday will fill out your tour set just fine, but they just don't have the same impact on record as the more adventurous tracks. The G-Men need to commit to their best ideas and give us more, rather than making us dig through a garden of average to find the gold nuggets!

The G-Men made a lot of interesting decisions in the creation of this album. Most are spot on: the songs to showcase, the delivery in the studio, and the embellishments in post-production. Had they made a few different choices with arrangements and soloists this album would be in the running for a '5'. What I find most interesting, and shaped my reading of the album, was the decision to entitle it G-Manifest Destiny.

The title alludes to an era when adventurous Europeans put down roots across the purple mountains and fruited plains. That pastoral, folktale feel is embodied in the poetic lyrics and meandering structure of Summer Sun, Mykonos, I See You, and The Predatory Wasp of the Palisades Is Out to Get Us!. The theme of heritage comes across in the impressive array of genres, from the Broadway musical-style Ladies' Choice,to the classic rock Touch Me, to the Latin Sway, and up to the dance-pop What Goes Around.../...Comes Around. The dynamic performance and production emphasize the individual topography of each song, so that G-Manifest Destiny really feels like a journey through the American musical landscape.

Manifest destiny was also one of the most irresponsible attitudes that swept the American public, leading to widespread destruction of ecosystems and cultures. This album does nothing so severe, but making that association for the sake of a pun reflects a level of immaturity. The soloists all sound like generic college guys, adept but noncommittal. The only solo moments that stick out are an abrasive soliloquy at the end of Yesterday and a whiny "HEY" at the beginning of LoveStoned. The arrangements are also somewhat underdeveloped, with too much reliance on direct transcription and thick pads to convey any personal touches. The one exception is LoveStoned, which is mostly painfully annoying but at least shows a spark of creativity and is worth hearing for the delightful mash-up. These decisions do not spoil the album, but with wiser planning the G-Men could have made a much more engaging experience.

On the subject of poor planning, the group did not give credit where credit is due. I was disappointed to see no mention of John Gast, the original painter for the image printed on the CD. Also, Garrett Carswell takes credit for the arrangement of Yesterday that is (as far as I can tell) an exact replica of the Boyz II Men version. (See this article for liner note etiquette.)

So maybe I wouldn't have called it G-Manifest Destiny. "G-Menagerie" would have suggested the wonderful diversity without invoking so much controversy. Missteps aside, it is fun to hear the G-Men dive wholeheartedly into so many genres. The mix of contemporary and classic, without too much cliché, makes for an album that can add songs of substance to your library. The G-Men already pick songs that lend themselves to powerful arrangements — now they just needs to G-Man up and own them!

This album is available only on iTunes.