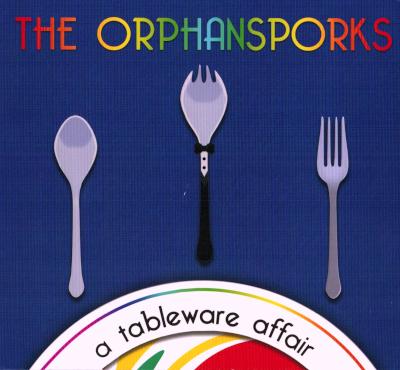 A Tableware Affair offers controversy and confusion — and unfortunately, not enough good music to recommend an album purchase.

The production is a big question mark/exclamation point/ellipsis on A Tableware Affair (translation: what do we make of this production?!...). There are certainly fewer enhancements and absolute fixes on A Tableware Affair than modern a cappella ears are used to. There's an occasional charm to hearing a cappella music this way, especially when the percussion is really rocking and you know it's because a talented mouth is spitting it out. However, it's largely akin to getting invited to the group's evening rehearsal time: fine to listen to the music in the moment, but not slick enough to take home with you to keep playing.

But the major sound problem on A Tableware Affair is that the principal engineer doesn't seem to have a solid grasp on the all-vocal music here. Because sometimes the percussion also sounds like someone tapping their finger in time on the microphone head (especially in parts of If You're Out There). And the backgrounds aren't crisp and delicious; they're just sort of heaped up in a mud pile. I also have no praise for the audio levels, which are all over the place within tracks and on this album as a whole (some lines are obnoxiously loud, some you'll just never hear at all). I'm not sure I've ever reviewed a studio album where the audio was this inconsistent, most particularly the weakness of the first half of A Tableware Affair and the cleaner approach to the back-end. Going for a more natural sound is one thing; not being proficient with your tools is quite another. Like, is the tempo actually rushing on Please Please Me? At least the OrphanSporks have soloists who sing in tune and have emotion, or I'm not sure how we'd continue here.

Adding to the major sound problems are song selections that are "so last year" or "so a decade-plus ago", and well, this is all getting rather dated for the OrphanSporks in a time when a cappella music is innovating the heck out of its musical decisions. Example: I love both Precious Things and Torn (who doesn't?), but both of these absolutely dominated the collegiate a cappella scene in the late '90s — everyone, every group ever, had these in their line-up, and you'll find them on several a cappella compilations released in that era, too.

With a cappella music and groups appearing more on national television, now is the time for presence, risk, and creativity, which many of these arrangements and the unfortunate recording/mixing don't allow for. This is certainly not to say that you need a track list of only current hits, or that you have to ditch all your favorite songs in favor of the really weird or out-there tunes just for the sake of being different, but it is to say that since you're fundraising boatloads to make an album, and you want people to get excited about your work, you may as well add adventure to your album to maintain that coveted enduring value. Wouldn't it be great if twenty years from now, the OrphanSporks gathered at a reunion and fist-bumped while saying, "Man, remember when we made the coolest a cappella album ever, and people are still listening to it because it is so damn cool and still sounds so damn cool? Man, we are so damn cool and smart and awesome."

However, one song does have lasting value. I've added Time Of The Season/Give It To Me Right it to my growing sheet of candidates for RARB's Picks of the Year. When soloist Ela Joshi starts adding her own vibe on just the fourth note in, it's hot. When her extra suave duet partner Sam Paul slides onto the scene, it's suddenly a smoky nightclub on A Tableware Affair. The mood, the mood! How I long for this one to be re-mixed properly because it would kill everything in its path. The studio didn't help the final outcome, but the OrphanSporks certainly had a clear and strong vision for this one from the start. I also enjoy the sultry razzle-dazzle infused into Disturbia, which does indeed feel modern and adventurous.

There are audio takeaway lessons here that don't need to be re-stated. The OrphanSporks seem deserving of a much better final product.

A Tableware Affair could have been recorded in 2003. Nothing on this album, aside from some of the repertoire, is particularly modern in its concept or execution. This isn't a problem in and of itself, except A Tableware Affair isn't even mimicking a particularly strong 2003 release. This is collegiate a cappella by the numbers: crowd-pleasing and decade-spanning repertoire, mashups and medleys aplenty, and an unhappy medium between live off-the-floor recording and excessive overdubbing.

Let's start with the good. The sprawling Swag Medley is actually pretty fun, and caps off the album very nicely. I was pleased with the overall crop of soloists on A Tableware Affair, the men and women of the OrphanSporks show commitment and some real vocal ability here. Meg Carr and Katherine Geithman have great interplay on Billionaire, Sam Paul gives a convincing vocal turn on If You're Out There, and when she's not being buried, Julie Melchor sounds very good on Torn. Unfortunately, the strength of the soloists isn't always felt in the background vocals; while there are no grievous tuning errors, the blend and time feel of the OrphanSporks' background vocals are all over the map. The bel canto soprano lead on such numbers as Please Please Me/Sex On Fire and If You're Out There seems gratuitous and out of place, and while its overstuffed arrangement did it no favors, the backgrounds on Torn are a near-unlistenable din.

The most glaring problem with the album is, quite frankly, its amateurish production and engineering. The overly compressed solos come off as being clipped, as if coming out of a low-quality car stereo. The mixing is bizarrely unbalanced as well, with occasional background parts popping out of the woodwork and overwhelming the soloist. Soundscapes aren't crafted with any consistency, as gimmicky production effects rub up incongruously against unprocessed and dry vocals. The vocal percussion is well executed technically, but it's recorded here as spitty and undefined.

A Tableware Affair is a flawed piece of work, hurt irreparably by the fact that it simply does not sound very good. I would have preferred an album that was committed to being either a faithful representation of the group's live sound, or an album that was totally committed to studio experimentation and exploration. As it stands, A Tableware Affair is trapped in an unhappy middle ground.

There is a phenomenon in collegiate a cappella I call "Pavlovian percussing." Pavlov discovered that dogs can be conditioned to start lapping their lips not just at the moment they are served dinner, but at the very first signs that dinner is on the way. Imagine a dog with tongue lolling, grinning giddily and knocking into everything with his waggly tail as he dashes to the spot where you set his dish. The epitome of instinctual, unrestrained excitement. That's how a Pavlovian percussionist responds to the sight of a microphone, the sound of a pitchpipe, or the very mention of a new arrangement. It's what comes to mind when I hear the rambunctious rhythms and loosey-goosey blending that characterize A Tableware Affair. Pavlovian percussing can make a rousing performance, but the OrphanSporks could have stood to tame some of that energy and had a much more musical album from the studio.

Pavlovian percussionists trust in their gut to arrange parts to make a song groove. Unfortunately, they only lay down something catchy for Rolling In The Deep and If You're Out There. Every other song is crowded with a frenzy of "b" and "k" and "pf" and "ptttt" and "sh ts ts" on more subdivisions than you can wrap your head around. Particularly in Torn, Disturbia, and Time Of The Season/Give It To Me Right, the loops are almost completely impervious to the rhythms going on in the background or the solo. In the effort to crank the excitement, most of the rolls, high hat, and snare hits sound like they are gasping for breath. The kick drum often takes on a growly quality that might add volume in live situations or some grunginess to a breakdown, but just makes for a muddy bottom in Rolling In The Deep and Swag Medley. The parts are simply too cluttered, with too little regard for the important beats, to get nice clean sounds. Where percussion is supposed to emphasize the various countermelodies going on, on A Tableware Affair it mostly just distracts.

The mentality that accompanies Pavlovian percussing is one present in the singers of the OrphanSporks as much as the beatboxers. The drum parts don't always follow a coherent groove because the arrangements don't always suggest one, with their tongue-twisting "jet jinna din doh" riffs or open vowel chord progressions. The drum sounds can't be sterilized in post-production because it would clash with the imprecise rhythms and tuning going on in the more natural sounding background. Judging by the hidden improvisational track, the sound effects scattered throughout, and the eclectic tracklist, the OrphanSporks are an adventurous group with a sense of humor and loyalty to their craft. Pavlovian percussing isn't the most obedient style out there, but if you love to watch the puppies play then A Tableware Affair might just be your next best friend.

To purchase this album, send an email to theorphansporks@gmail.com.