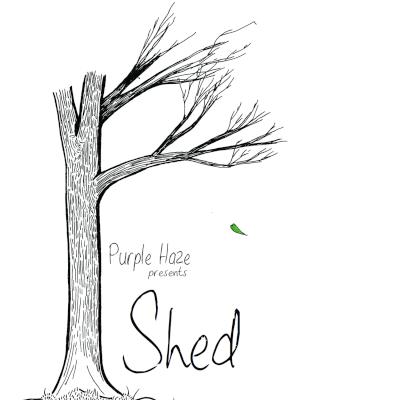 If it's all by design, then Shed is notable for its thematic aspect. The beginning of this album is busy and plump, like a tree in spring time. The production very audibly winds down to the album's closers, which are stark and stripped, perhaps representing that last leaf shaking loose and falling, falling, falling into winter. The programming does indeed seem to reflect the album art, and if it was all intentional for the listener experience, how delightfully vogue.

However, the lack of sonic contrast in the "busy tree" section of Shed makes it hard to stay with the music, to feel the pieces as individual contributions and not one long stretch of similarity. Though the vocals are highly skillful, when the frequent vocal pounding abruptly stops for Death by Chocolate it's a welcome relief, allowing the listener to settle into nuances and warm softness for awhile. I suppose this is midseason for the busy tree. Death by Chocolate also introduces what it really comes down to on Shed: contrasts. When it's all performed at one level (with all the squirrels racing and flowering, bushy leaves), it's good but doesn't beckon us close. When range is introduced, ain't no comparison on the college scene: Purple Haze is amazing. For me, Shed really sheds (and exposes incredible vulnerability and talent) at Sigh No More.

Because if you're willing, Purple Haze will tease out the headbanger in you with all the vocal screaming and pumping bass-vp hysteria in the earlier uptempo tracks, but I'm here to tell you that the group's real strength is in folksy music. Is that single green leaf on the album's cover, the last one of the year, falling off the tree to leave us with the bareness of Sigh No More, Head Full of Doubt/Road Full of Promise, and Volcano? I love this final style on Purple Haze.

You won't get chills or feel a knot in your throat in the beginning of Shed, but expect an emotionally challenging, lonely, beautiful mess for your listening experience at its ending. This is what making music is all about. Those suspensions in Sigh No More, coupled with the more classical approach (on a pop song!), with well-appreciated restraint on the mixing board is creative genius at work — thank you to all the decision-makers, and to soulful lead Carl Biehn and arranger Matt Deitchman who gave us this gift. A very similar method is applied to Head Full of Doubt/Road Full of Promise — upfront rawness, exposure, natural movement, and leaving the music alone to speak for itself. What talent, what effect. Volcano lures us into a sultry trance-like groove to close out Shed, again with minimal tampering, and when those last notes are sung, you won't want to leave the world Purple Haze has so powerfully created for these final three numbers. Don't be surprised if you just stare out the window for awhile, enjoying your new mood, reflecting on the achievement you just heard, waiting for the snow to fall.

Bottom line, Shed is really interesting. But because it runs the production gamut, you may only like half of the offerings. Since refreshing and emotive Sigh No More is among the best collegiate a cappella today, you wouldn't go wrong purchasing Shed to see what else you'd like to pick from this tree.

Some albums are easy to review, usually because they are either easy to categorize or easy to digest. Shed, the latest from Northwestern University's Purple Haze, is neither. Before I explain, let me save you some suspense: this is a very, very good album, with engaged and energetic singing, distinct stylistic choices, and overall excellent production. I just don't know what it is trying to say.

Let's step back for a minute. An album does not necessarily have to "say" anything. The vast majority of the albums I have heard in recent years were merely collections of popular music, typically from the past fifteen years and the Billboard charts, garnished with a bright sheen and little introspection. A few of them were even quite good.

When I listen to Shed, however, I get the sense that this group is trying to say something. First, there's the track list, which is eclectic in a way I very much respect. There's not a single Bruno Mars, Adele, or Rihanna tune on here. Instead, there are songs from artists I've never heard of and some lesser-known songs from artists who are more well known. I love it when a group is willing to stay away from the pop mainstream and focus instead on hidden gems.

So, what makes me think Purple Haze has a message? The album feels like a journey. It starts with melancholy and ends with melancholy, with a wide range of feelings in between. The group pulls off an emotional kaleidoscope, turning from despair and heartbreak to empathetic comfort (Death by Chocolate), from bitter loneliness (Cold War) to confident sass (Headturner). Despite all this range, I suspect I'm missing the message of this journey. I suppose it's my loss, because Purple Haze seems to feel everything so intensely.

Setting aside whether there is a bigger meaning here, there are a few consistent stylistic traits throughout the album. Most of the first seven tracks (with the exception of the delightfully soulful, in-the-pocket Death by Chocolate) feature punchy, driving percussion and fuzzy guitars, all while still retaining a true vocal core. These songs are processed and rocking enough to warrant cranking up the volume, but each also features a number of moments which are overtly vocal. Then the group moves to the next three songs, which are even more choral.

Luckily, the group can sing. Especially the ladies, who really shine on solos (Melissa Channick on Headturner, Sarah Sin on Paris (Ooh La La), and Jane Hurh on Death by Chocolate ooze personality and emotion) and on the backs (Headturner, Death by Chocolate). The men occasionally get a little shouty and theatrical, but it's not so much a detriment as a distraction.

Bill Hare's mixing is broad yet nuanced, with a wide range of drum sounds which are both effective and meaningful and a huge palette of instrumental mouth sounds layered in with just the right finesse. My only complaint/observation is that the album sounds a bit dark and stifled, maybe a bit suffocated. I'm not sure if this was a conscious choice, but I would have liked to hear these songs with a little more brightness and air.

For some reason, Shed reminds me of life as a 19-year-old in a small dorm room in a small-town college. It's a thrilling carousel of sadness, angst, defiance, hope, and more. The men and especially the women of Purple Haze clearly have a lot of feelings to share, and they do so effectively. Just like when I was a young college student, though, I'm not sure if I'm grasping the meaning of it all.

Following the success of previous albums Feed the Sound and Mosaic, Shed is easily the most solid album that Purple Haze has released that I've heard to date. The group, Ben Lieberman (producer), and Bill Hare (mixing/mastering) should all be extraordinarily proud of the work that they've put into this album. The arrangements are fresh while remaining true to the original songs, and they've clearly been enhanced to give the listener everything that the studio has to offer. Cascading chords, brilliant vocal percussion, full-bodied bass, and brilliant soloists combine to make this an album that every a cappella enthusiast should add to his or her collection.

One of the things that immediately caught my attention on this album was the vocal percussion. It's intricate and nuanced to the point that it is no longer just keeping time but supporting and enhancing every aspect of the arrangement. Hare and Lieberman have layered some guitar effects on the backs in tracks like Get Back and Paris (Ooh La La), providing more color without distracting from the naturally vocal quality of the arrangements. Even better, the tracklist largely stays away from the more overplayed songs of the past several years and brings fresh and exciting takes to lesser-arranged songs like Wolf & I and Summer Sun.

The album seems front-loaded with femme soloists. Tracks like Wolf & I, Cold War, Headturner, Get Back, Paris (Ooh La La), and Death by Chocolate feature very strong (sometimes too strong) female voices, leaving the back half of the album less impressive. Tracks like All Over You, Summer Sun, Sigh No More, and Volcano feature male soloists that just don't quite compare to the sheer power of the female soloists. It's unbalanced.

I guarantee that you can find a place for Shed among your other a cappella albums. Every track is a standout, and the entire album is fantastic.

Available for digital download on iTunes. Check out www.PurpleHaze.ws to order a hard copy.