Stuck In the Middle (SIM) 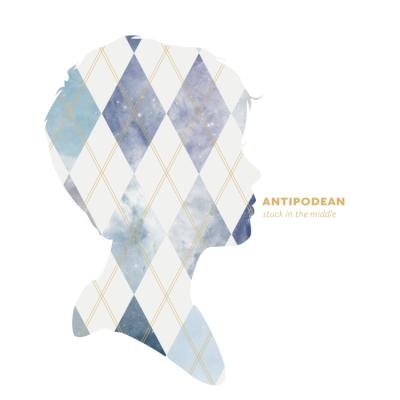 Antipodean is a bit too calm, cool, and collected when I sense these guys could really up the a cappella antics with some solid hair whipping music, but you've gotta love the musicality on display, even if it is often understated. Stuck In the Middle is an emotive group and a group that sings together well as an ensemble, which results in a strength for singing the tender, the enchanting, the more delicate side of a cappella.

Maybe it's Antipodean's set-up that throws me. We're told in the liners that we're about to embark on an album of contrasts. And genre-wise, yes, the track list here reflects that statement. But after the very full sounding, appropriate party atmosphere of super fun Moves Like Jagger, we're taken down in tempo, and edge, and polish, and creativity, and contrasts within the songs for too long to sustain interest. Zak and Sara, Set Fire to the Rain, Rye Whiskey, and Haven't Met You Yet roll along in a much too-unremarkable way on the arrangement front (lots of repetition and un-exciting syllable patterns), and on the lead front, too. It's far to easy to tune out, and that's dangerous programming. This is also the risk of having a single arranger do your album, as is the case here: if he's hot and on the whole time, awesome — you'll have a really consistent package. But if there's very clear better pieces and very clear weaker pieces ...

... However. Then Helplessness Blues begins. As I said, this is a group that has a strength in tenderness. Stuck In the Middle's soft subtleties can carve out gorgeous lines, moments of real musical tension, and captivating storytelling on intricate works like Helplessness Blues, where lyrics really matter, and vocal restraint is absolutely necessary to set the right mood and feel as the song builds. They really get it, and I really love it. And here, album arranger John Montroy really nails it, too, as does Liquid 5th. This is delicious stick-to-your-ribs music.

The second half of Antipodean has more mixed results. Combining Earth Angel and Oh! Darling surprisingly works, and if ever there were a group to cover sweet Earth Angel, Stuck In the Middle is the group I want singing it. But the arrangement feels a bit off and thin for the first half of the song (love the bang-up ending, though). JT's My Love has a tendency to drag, and These are the Days has a nice laid-back groove but is perhaps not memorable enough. Brand New Day is certainly stronger, with a higher production and arrangement value. Things work, but not everything works.

Synthesize all this, and you'll indeed have yourself an album of contrasts, though not the kind that gets you really fired up about new music.

Stuck In the Middle's rich sound is watered down by vanilla song and arrangement choices and the result is an album that is derivative and forgettable.

There are glimses of what this group can do. I enjoy Moves Like Jagger for its energy and My Love for its atmosphere and groove. And the build at the start of the chorus in These are the Days is warm and wonderful and dramatic and probably the highlight of the album. But then it's right back to the verse where all style has been sucked out of the song (snapping isn't style). The playful jazz piano of the original has been replaced by rigid and oversimplified homophonic "doo"s. I want to like this song, but it's not worth trudging through the first half of the track to get to the chorus.

From an artistic perspective, it is perfectly valid to record a song that has been recorded a cappella many times before if you are doing it different or better in any way. But Stuck In the Middle's covers of Maroon 5, Ben Folds, Adele, Michael Bublé, and The Beatles don't stand out from all the other versions out there. And, Earth Angel/Oh! Darling sticks out like a sore thumb on an otherwise contemporary album. Also, I have no interest in hearing another uninspired cover of Haven't Met You Yet.

Call it identity, vision, ambition, whatever — this album doesn't have it. Almost everything here has been done many times before, often much better. So while the singing isn't bad, I can't recommend Antipodean.

Antipodean doesn't quite get there. It sets out with a solid foundation of catchy, familiar songs and melodic arrangements. It gets rolling with spirited background performances and full-fledged vocal drum kit sampling. It stretches the imagination with a mixture of traditional and modern aesthetic across a variety of genres. Then it gets stuck in the middle.

John Montroy, the lone arranger for the entire album, has put together a rich opus to represent Stuck In the Middle (SIM). The background is composed mostly of open words and vowels, which is a welcome relief from the sharp instrumental syllables that often clutter pop arrangements. The choral backings create a perfect atmosphere for the folksy Helplessness Blues and an impressive amount of punch for the hip-hop My Love. I don't, however, appreciate how solo lyrics were chopped up and awkwardly phrased to fit instrumental lines as in Moves Like Jagger and Haven't Met You Yet. And while some arrangements, especially Zak and Sara, alternate between "ooh's", "dim"s, and lyrics for fun feel changes, others such as Set Fire to the Rain just wind up losing all their momentum. Lacking a sense of direction as they do, some of these songs might leave you feeling stuck in the middle.

Where Antipodean really gets held up is the post-production. You can hear the members of SIM performing their hearts out in the recording, following the dynamic flow of Montroy's arrangements. But then Liquid 5th drenched the backgrounds in reverb and compressed the living daylights out of them. The whole album is a single dynamic, piled high with mid-range frequencies that take up way too much space in your headphones. The cloud of wide stereo harmonies and percussion takes up so much space that you can hardly hear the poor soloists squished in between. The only time I really hear SIM break through is the uplifting "Darling, won't you be mine?" going into the finale of their Earth Angel/Oh! Darling mash-up. Antipodean would be much more pleasant, and the arrangements would probably make more musical sense, had the dynamics not gotten stuck in the middle.

Antipodean can be purchased from the Middlebury College Bookstore's web site.