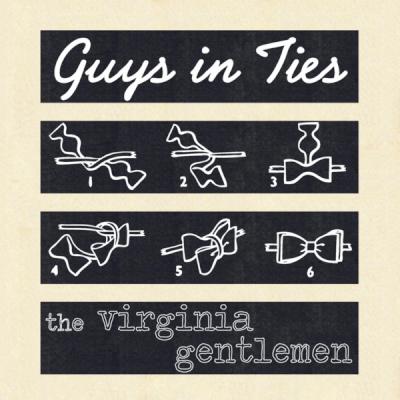 Straightforward might be the best way to describe Guys in Ties, the latest release from the Virginia Gentlemen. No real surprises, nothing earth-shattering or remotely innovative. Nothing bad or cringe-inducing either. Just straightforward, very literal, near transcriptions of a range of repertoire filtered through glossy production by James Gammon.

If that floats your boat and you like the track list, go ahead and pick up a copy. Interesting and engaging it's not, but it sounds very slick, bounces when it should bounce, and might make for good background music on a long road trip.

Guys in Ties might also fairly be called The Jacob Lyon Show, as his arrangements make up 2/3rds of the release and he also solos on two of the songs. Unlike many albums past that show a dominating influence of a single person, the risk here isn't really repetitiveness, because the whole album sounds pretty much the same. The Gents seems to be striving for, or at least are satisfied with, first-rate mimicry and so everything sounds pretty much the way you'd expect it to. Indeed, Lyon does some of the best transcriptive work in the opening five tracks (alongside John Anderson on Secrets). What dinged these first few was an odd choice here or there that just made them not quite excellent: in Moves Like Jagger, it's the quarter note bass notes and overall hollow mix that should have been tighter and crisper; in Secrets, it's the elimination of the quirkiness of the original — the strings, the funky percussion — in favor of a more vanilla boy-band sound; in Holocene it's the insistence of the solo and the glossing over of the plaintive clap and the acoustic drum that helps ground the original.

But the openers are the better tracks found here. As we get deeper into the album, there's lazy arranging aplenty. Even with its dance track segue towards the end, Glad You Came/Paradise is remarkably uninteresting. And the guys don't help themselves much by picking repertoire that can't help but sound simple and boring if performed imitatively. Colder Weather is a pleasant enough song, and Andrew Fish's solo was worthy of its CARA nomination, but give it a super-traditional arrangement and listening to it still won't be anything more than OK. Heavily-produced originals like Without You and One Thing sound nearly identical here, but I'm not really sure that's a compliment to the artistry. It's not Boyer-esque layers of syllables upon syllables to create texture; it's block chords and lots of processing and sequencing. Notwithstanding its inclusion on BOCA 2013, the work feels like a lot more Gammon than Gents.

I'd also be remiss if I didn't mention Country Roads, which is a song by John Denver and not James Taylor, as shown in the liner notes. Never mind that authors of the songs are not credited as they should be, but if you'e going to include improper credits, at least get it wrong correctly (James Taylor's song is Country Road — singular — but it's not the one performed here).

I wish I could be kinder to the Gents as they will always have a fond place in my heart dating back to the days of Insomniac and continuing through the more recent success of the band Parachute, which includes two Gents alumni. But this isn't groundbreaking or even ear-catching work. It's fine. Just plain fine. And with all the bells and whistles and talented voices at their disposal, I wanted more.

Dapper as they are, the Gentlemen are dated here, and not in a hip rustic way that their bow ties could capitalize on. Guys in Ties just sounds and looks a bit rusty.

Brimming with j-based syllables and busy arrangements (most especially Little Lion Man), the overall sound here doesn't sit comfortably in the sleek modern a cappella soundscape. The group stitches up Glad You Came with Paradise in one track despite the jarring tempo and tone changes. The basses have a loud and clear old-school "ba da dm!"-style foundation that shouldn't be sonically showcased in the mix the way it is on Crossfire. Even the album presentation comes from a time that's passed with what appears to be clip art for the cover and merely lists the bands the group covered credited instead of listing the requisite composers and songwriters by name. The Gentlemen could really use a zap of hot-and-fresh to infuse their work with more relevancy. Big start: The Man Who Can't Be Moved, which is a smooth and creamy delight fronted by Struan Shields. And, getting it right from the get-go this time: letting James Gammon handle the recording and mixing from start to finish. Whew, what an improvement.

Except, I don't want the Gentlemen to off their cowboy songs while searching for refinement, the pieces here with down-home roots, because they're painfully adorable. With keen arrangement editing and more searching for fresh ideas, there's room for both old and new on future Gentlemen albums. Specifically, I'm speaking about hanging on for dear life to works like Colder Weather, which has a real twang that fully charms, and of course, iconic Country Roads (which should have just begun at the :31 mark, because that too-literal-instrumentation beginning is rough; I see no need to open a song with "wahhh!"). For me, these two songs just are the Virginia Gentlemen. I can hear their earnestness, feel their passion. Anyone else feel verklempt during the Country Roads choruses here? Answer: certainly many. The thought of a whole album of similarly well-suited fare makes me pretty excited.

There's work to do for the Gentlemen before dusting off their suits for another record, but there are notes of hope on Guys in Ties.

This is what it is like to go to a zoo with only ducks. Ducks are comical and handsome and sociable, and it is certainly an experience to see them swimming in the aquarium or waddling around a plot of savannah. You soon realize, however, that a duck is still just a plain old duck and at the end of the day you will be very sick of the quacking. That's how Guys in Ties makes me feel about "jigga-jin in jow jow ja".

The flocks of "j", "ch", "d", and "b" syllables flap by again and again in the form of droning riffs, arpeggiated chords, and slow block chords; every single pluck of a guitar string and plink on a keyboard is denoted by a jarringly un-instrumental consonant. The only thing more distracting than the instrument shtick is when the background phrases lyrics awkwardly across prominent riffs and half note chord changes.

I wanted to hear something I can't find in any old pond. The most exotic animals at this zoo were the Glad You Came/Paradise mash-up, a pairing that struck me as forced and melodically incompatible, and Country Roads, which sounded like a muddled folky version of Toto's Africa. I would have preferred the guys concentrate their creativity on breaking up the repetitive "jo jigga jip jigga jo no no dop" of Barton Hollow. Or lopping off clumsy consonants like "dohhhh, joh no doh" in the bridge of Little Lion Man. Some eigth-notes without "bum bum" would have been a welcome relief in Without You. Heck, by the end of Colder Weather I would have been thrilled to hear something as innovative as a "quack, quack".

So no penguins or giraffes, but producer James Gammon has proven that he will be ready to provide appropriate soundscapes when they come. After the somewhat bland mixing of Rugby Road (2010), it was exciting to hear the Gentlemen with multi-track recording and a plethora of reverbs and delays. The echoing of certain soloist phrases and transitions of the background between studio spaces and big halls add a pleasant atmosphere to an album bogged down with constant in-your-face polyrhythms.

If you only have ten minutes at the zoo, check out Moves Like Jagger and Holocene. In the other exhibits, the sampled percussion and impassioned yet uninspiring soloists compete with the rambunctious "dim dim ji di dim jim dim". But the thumping bass drum and filtered fills are perfect for the energetic Moves Like Jagger, and the falsetto of soloist Andy Grindstaff is every bit as moving as Bon Iver's Holocene. Otherwise it's mostly just ducks.

The Virginia Gentlemen sound much more cohesive than the days of Rugby Road. With Guys in Ties they have shown that they are well versed in chart toppers in a variety of genres and are willing to get creative in the studio. Now that they have settled on a producer to design the zoo, I hope to hear them develop as arrangers and fill it up in time for the next release.