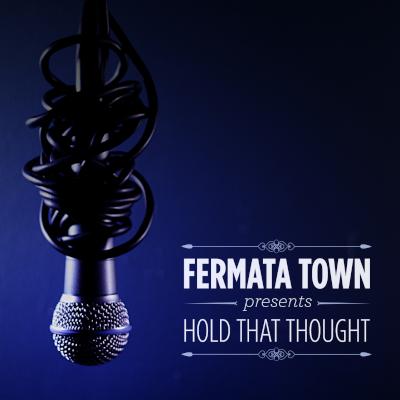 A debut album. Hold That Thought. No, really. Hold That Thought is the debut album by the Contemporary A Cappella League group Fermata Town. Channeling my inner Dave Brown (redundant?) I exclaim a "Whhhaaaaaaat?" Everything about this album belies that one specific detail. It shouldn't be possible that a recording that is this professionally planned and performed is the output of a part-time collegiate-sized group that started in 2009.

And yet, that's the truth.

Maybe it's the collegiality of Fermata Town that makes Hold That Thought so successful. Take a group of freshmen in their first year in a group, then age them all together through three years of school. Bless them with some phenomenal singers and arrangers to lay a solid musical foundation. They've had time to learn the various nuances of their voices, how their artistic drive melds with their personal strengths and the type of arrangements that cause the singers to shine. Add to this base level of goodness an experienced production team to take the raw tracks to the next level et voila, you get to listen to a near flawlessly executed album.

If I were to focus solely on what's great about the album, this review would probably end up several pages long. The sound is warm and inviting, with great balance between the sections and effective use of dynamics and musical phrasing. The opening of Stereo Hearts is captivating for its simplistic yet engaging tonal clusters with the leads. The soloists are really strong, each one in complete command of his or her instrument. It's hard to pick any standouts when they are all so uniformly good. I'm particularly drawn to Chiris Giordano. Not for any stellar vocal pyrotechnics, but because his song held my interest the longest. I'm a sucker for re-imagined Britney Spears with Overboard's Toxic being one of my favorite tracks of late and possibly all time. Circus is especially earworm-ish — it jumps into that pop jazz fusion genre perfectly. Katya Dreyer-Oren is a firecracker with her scat chops. Wow. Love all of it. And Sarah Spinella's stretch in her upper register is to die for. The group has a really defined artistic vision that shapes and colors every track on the album.

And that's part of the problem. What should be a benefit is slightly detrimental to my overall enjoyment of the disc. The album eventually begins to sound the same. The arrangements tend to turn ordinary pop songs into smooth jazz hybrids. Dreyer-Oren is the lynchpin of the arrangement team, having her stamp on every track. She's very talented and helps her co-arrangers really pull the best out of the group. There are superb flourishes here and there that catches the listener off guard and makes the ears perk up! I'd love to see one of the charts and sing one of the tracks. But note that's one. Two at the most. At nine, they get somewhat monotonous with no continually driving up-tempo songs, or any sweeping ballads. And with the year that was, there's only so many dubstep breakdowns that one album of only nine songs can have. Hold That Thought has multiple ones. Oy.

Forget You comes the closest to breaking the mold by having a bit of pizzazz in the block runs and arpeggios, but then the bridge slows down, so we're back to their safe zone. Geek in the Pink starts out with a bit of zest but then really goes into overdrive for a few seconds with what feels like a swinging bossa nova before reverting to the original style and tempo. I wanted more of that bridge section — finish the song out that way. Jarring and brilliant. And the organic stomp drumming of Settle Down added some life to what I thought was going to be an extremely uninspired transcription of the original. Adding another frenetic track like Forget You with the smart tempo changes of Geek in the Pink and the earthiness of Settle Down would spice up their repetoire and really energize this album.

Congratulations go out to Fermata Town for doing what they do well; Hold That Thought is a solid album, especially for a debut. Diversfying the rhythms and extending beyond the group's comfort zone will make their next album a truly exciting experience.

Fermata Town has a charming way of putting a richly jazzy spin on all its tunes. And though a newer League group, Fermata Town sounds like they've been jammin', bluesin', riffin', and tightly blendin' like this forever. In a community of highly recycled cover fare, Fermata Town is succeeding by creatively exploring all the edges and corners of its songs; Hold That Thought is an arranger's dream scenario.

One of the biggest complaints of modern a cappella is arrangement redundancy and expectedness — why sing a literal transcription when you have the reins to take the music in a new direction? The freshness infused into the songs on Hold That Thought is a real gift on display, with arrangements almost fully contributed by members Philipp Walzer and Katya Dreyer-Oren. With Stereo Hearts, we hear the result of extreme contrasts between starkly empty vocals and a full group sound, passed back and forth with exaggerated dynamics. The original has a hip-hop slant with rap carrying the piece; here, it's pure vocal jazz with a rap element. Big dynamic contrasts are really the meat and potatoes of most of these pieces, which is unfortunately uncommon in most studio-produced releases and is totally refreshing to hear under a spotlight. Fermata Town's dizzyingly creative closer Circus (yes, Brit-Brit Spears!) puts them on firm footing as a hot group to keep tabs on — anyone that can reinterpret Britney with such nuanced musicality is certainly an a cappella hero for contributing this to the a cappella world's list of guilty pleasures.

Fermata Town is a large ensemble for the post-collegiate world (fifteen-ish members), and yet they have an intimate sound. Part of this comes from strong leads, most especially the smoky vocals of Katya Dreyer-Oren (People Get Ready, Seven Nation Army, Circus). Part of this is a compliment to the sound engineers who kept everything tight and consistent, although Hold That Thought as a whole sounds too over-worked and glossy for the vocal jazz soundscape, where gritty rawness is an asset to the shifting arrangements and mood. But one big example of where every member's part (singers, lead, arranger, and engineers) comes together in brilliant fashion is Settle Down, with a lead from Sarah Spinella and an arrangement by Dreyer-Oren and Peter Moriarty. Anyone could mistake this track for a top pro's release, hot dang.

Because the songwriting and interpretations are so focal here, I do wish the requisite original composers were listed and not simply the original artists (for example, part of the reason Settle Down is so amazing is because of François "Franc" Tétaz, the talented Australian composer who co-wrote the piece, who did not get credit here). Still, Hold That Thought is really quite an achievement and certainly re-draws the possibilities for a cappella arrangements.

In the liner notes for Hold That Thought, the debut album by Boston's Contemporary A Cappella League group Fermata Town, the group sets a goal: to find its own voice and "put a unique stamp on the Boston a cappella scene." This is a daunting task with Boston's wealth of contemporary a cappella groups. The game plan, according to Fermata Town's liner notes, is to utilize original arrangements and an original sound while acknowledging that modern groups can (should?) cross multiple genres and techniques.

With Hold That Thought, the group offers nine pop/rock/R&B songs laced with threads of jazz color. In this way, the group certainly has an idea of its own identity. The energy and confidence on this album demonstrates that the singers are comfortable with this identity. The stylistic voices (a pun!) on this album are group members Philipp Walzer and Katya Dreyer-Oren, who arranged all nine tracks. Their colorful chord substitutions are surprising little gifts dropped into arrangements which are often simple and uncomplicated. Walzer and Dreyer-Oren make varying use of a lot of the tools in the arranger's toolbox, from syncopation to substitutions, and from voice cascades to creative syllables. Notably, they omit one common tool, the use of counterpoint or polyphony to create texture. Nevertheless, the arrangements are fun, they serve the group well, and they are generally effective. For a few, a little more texture or counterpoint might take a "good" song up a notch to an "excellent" one, but it's hard to seriously quibble with much here.

The group's cover of Bruno Mars's Lazy Song is probably the lone exception. Setting aside the sporadic bell tones, which are the best moments of the song, the arrangement is otherwise lethargic (another pun!) and static. People Get Ready is similarly uncomplicated, but it benefits from Dreyer-Oren's smooth and easy delivery on the solo and the wetter reverb as mixed by Tim Bongiovanni.

In general, Bongiovanni's mixing achieves a nice organic tone; it's not necessarily live sounding, but it's also not electronic. While opener Seven Nation Army could be fuzzy and distorted like the original, Bongiovanni keeps it obviously vocal, a message to the listener that this is not going to be voices-as-electronics. The scats, which are surprising and excellent substitutions for the piano solo in the Jamie Cullum cover of the White Stripes' original, hammer this point home. I love that the album closes with another track, Circus, that also makes use of talented scat-artist Dreyer-Oren, giving the album a sense of continuity and closure.

Circus is also noteworthy for its growth as the song progresses. The chart never repeats, changing rhythms from verse one to verse two (plus some colorful substitutions), and then changing a whole lot more two minutes into the song. It's as if the original has said all it has to say, so a scat drops over bass and drums and then jazzy open syllables in a bridge completely untethered from the original song. After this, the chorus returns with a slightly different take, then the backs drop out and return with more variations on the chorus. Finally, a breakdown section. This is some creative, engaging, and thoughtful arranging.

There are a lot of little moments which demonstrate musical diversity on Hold That Thought. The latin breakdown on Geek in the Pink and the crisp and crackling vocal percussion and stomps/claps on Settle Down are two such examples. While these are sonically appealing, they aren't really what Fermata Town is all about.

No, this is a group designed to meld pop (and occasionally pop-rock or R&B) with jazzy sensibility for a unique take on songs which have received a whole lot of radio airplay or a cappella coverage. They do it well. In my eyes, the next step for them is to perhaps expand the range of song selection and maybe the texture of their arrangements, but there's nothing at all wrong with what they've done here. In fact, hold that thought and take a listen. Now what was I saying?