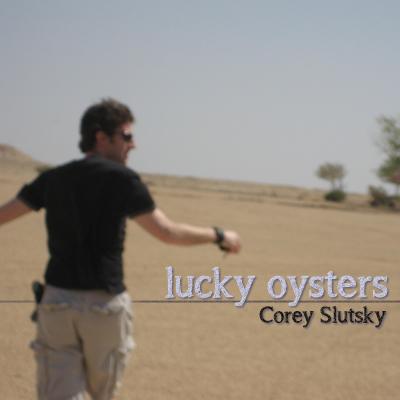 Traditionally, the world of "one-man a cappella" has been a bit of a mixed bag. There are few vocalists in the world of a cappella that have the range and control to pull off all the vocal parts and a multitude of genres, and the end result is usually pretty spotty. Corey Slutsky, armed with strong arrangements, a powerhouse voice, and some serious production help, has delivered an effort that is good but that falls short on several fronts.

For all the challenges of solo vocal work, there are a few advantages; blend becomes a little less of an issue when a singer harmonizes with him- or herself. But as numerous pop producers have discovered, an entire choir of one voice can quickly become unsettling. To Slutsky's credit, he has found a nice amount of balance with himself. Some tunes, such as the solidly executed Price Tag, don't sound like the work of a one-man band.

The six songs on Lucky Oysters represent different facets of the a cappella world: from the hard-rocking spirit of the Linkin Park cover Paper:KUT to the classic a cappella sound of Billy Joel's Piano Man and the peppy nostalgia of Ducktales. Corey Slutsky, while certainly endowed with a fantastic voice, doesn't necessarily fit into every part of every song. There are times when precise choral diction and music theatre affectations permeate heavily in his solos, and the overall spirit of the song suffers. Tonal shifts within an album at their best show versatility, but here I was left feeling that Slutsky would be wise to explore some of the better-executed material in a more in-depth fashion (Price Tag and Paper:KUT are the standouts on the album).

The production here is nothing to sneeze at. Numerous respected producers and engineers contributed to the album: Tat Tong, Dave Sperandio, Ben Lieberman, Carl Taylor, James Gammon, Alex Green, and Alex Koutzoukis all contributed mixing or editing to this album. That's an impressive lineup by any metric, and Slutsky as a producer clearly put a lot of thought into getting the best people for each individual song. It's a credit to both Slutsky and mastering engineer Dave Sperandio that the end result is sonically cohesive; the focal point on the entire album remains Slutsky's strong solo voice.

Do the positives outweigh the negatives on Lucky Oysters? Absolutely — it's a competently made and well-executed album. But the level of talent involved left me wanting more, something a little more intriguing and adventurous. While Lucky Oysters is a fine listen, there isn't anything here that hasn't been extensively covered already by a host of other a cappella groups.

Corey Slutsky is a mechanical musician. He likes his notes in tune, his percussion hits strapped to the metronome, and his covers sounding as close to the instrumental originals as the human voice allows. When he lets producers go nuts on the sound effects, the mechanical style is mesmerizing. When he tries to croon listeners into a reverie, it just sounds tacky. Lucky Oysters draws from both styles with an odd assortment that would have been more cutting-edge had it been released ten years ago.

The album opener, at least, will knock the shoes off your feet. Paper:KUT is a whirlwind of studio magic that punches this listener in the face with percussion (in a good way) while backing vocals whoosh by and aggressive solo lyrics spin listeners' ears this way and that. What really makes this arrangement is the well-placed embellishments, and James Cannon does a fantastic job spotlighting them amidst everything else going on in the mix.

Then the machine abruptly breaks down and stays down. The meticulous editing that holds Paper:KUT together makes Piano Man feel rigid and devoid of dynamic variation. The backing vocals are emotionless, imitating piano keys and mandolins and harmonicas, and the percussion is even more emotionless as it marches along with them. For all the fire that Slutsky's voice brings to Paper:KUT, it lacks the warmth and charisma needed to make a convincing ballad. The same uninspiring tone carries into Imagine and With You, which diffuse the momentum through the main stretch of Lucky Oysters.

Things gear back up some for the finish. Price Tag showcases some of the whizz-bangs that make Paper:KUT so enjoyable, but the tempo is too slow and the arrangement is too heavy to make listeners get up and dance. Finally, Ducktales reintroduces the spunky sonic atmosphere at which Slutsky shines. Clocking in at under one minute, this little jingle is teeming with nostalgic joy and does more for the personality of Lucky Oysters than the rest of the tracks combined.

As a mechanical musician, Slutksy enjoys the precision and potential for exaggerating vocal sounds made possible by digital recording. His thin, clear voice is perfect for backgrounds and leads on crowded arrangements, but it sounds much too calculated for songs that are supposed to come from the soul. Given that Slutsky recorded and produced Lucky Oysters himself, I would expect him to be more self-aware with his song choice and styling. As with so much a cappella out there, the performances caught up in the mechanics will run you ragged. Stick to personality and playfulness, and you will keep running back for more.

Lucky Oysters, the digital EP release by Corey Slutsky, eclectically spans hard rock to show tunes in six songs. I was very happy to take a listen to one of the few multi-track artists out there. Corey has a great mind for arranging, knowing when to keep it simple and when to take it up a notch or three. His sense of fun and play is evident even from the title; I love the variety of this release.

The only problem is that while Corey can connect with each style in the arrangements, his choices don't always play to his strengths vocally. Paper:KUT nails it, hitting the mark from beginning to end: great solo, strong arrangement, and very well-produced. This track is a good style choice for Slutsky, and in my opinion, it's the best track on the album. Piano Man is also very strong, and the solo fits wonderfully. The backgrounds are a little fluffy, but it doesn't take much away from the whole. However, the mixing fell short in the bass. Even with subwoofers and headphones, the bass is overwhelmed in the mix. And Piano Man isn't exactly a song with a driving bass line, but it's still the foundation and I would have liked it to be more present.

Imagine is the first track where I felt a disconnect. The arrangement is beautiful and jazzy. The solo sounds like someone sight-reading accurately. This is such a powerful song with a powerful message. Without emotion behind the solo, that power dissipates and the incredible arrangement isn't allowed to shine the way it could. With You, by contrast, is sensitive and touching throughout. The bass is a little jarring and tonally awkward at the beginning, but it's very minor. This song is a great example of Slutsky knowing when to pull back and let it stand on its own.

Price Tag is the weakest link for me, which might just be an example of Slutsky not choosing the best song to play to his strengths. It's a solid arrangement, but the solo sounds like it is in a strange place vocally. Also, blend suffers a bit in the second half, which is weird for a solo album.

I got so happy when I saw Ducktales on the track list — this track is short and sweet and shines brightly! Only one complaint about it: the lyrics are wrong. Both times I heard "tales of daring-do, bad and good duck tales" instead of "good luck tales", I nearly cried. Everything else about this track is so well-done that that one word hitch just gets to me.

I do love this album and have gone back to listen to my three favorite tracks over and over again. I've never heard anything from Slutsky before, but I am now a fan. His musical tastes mirror my own, and he can clearly arrange a wide variety of styles. I look forward to hearing him discover his sound as a solo artist!

In addition to iTunes, this album is available at Amazon MP3, Spotify, and other digital retailers.