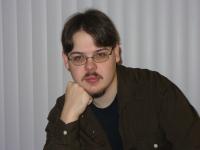 Sean got introduced to a cappella in high school. Two collegiate a cappella groups performed for the music department and captured Sean’s imagination with the idea of having a full band with no instruments. He began teaching himself vocal percussion and immersed himself in every bit of a cappella goodness he could find. He picked apart arrangements to see how it was done and began performing with small groups of classmates. In 2004, he joined the established all-male group Vocal Chaos as their full-time vocal percussionist. Less than a year later, he auditioned for and was cast in the major motion picture, The Break Up. As one of the Tone Rangers in the movie, he got to be a part of showing the world, “You should know better than to take a pitch pipe from a fella in the middle of a very funky groove, you could get hurt!” Vocal Chaos went on to co-found AcappellaFest in the Chicago area and performed with special guests such as Scott Leonard, among others. Sean’s time with Vocal Chaos resulted in several television and radio appearances, placing in the Chicago Regional Harmony Sweepstakes and releasing an EP.

Vocal Chaos wasn’t Sean’s only professional a cappella work in Chicago. He was a long-term member of InVox, a larger co-ed a cappella group that also released an EP. Sean also performed as the bass for the in-house a cappella group at Navy Pier for three seasons. Sean was invited to teach and perform with multiple law school and high school a cappella group during his six years in the Chicago a cappella scene.

In 2010, Sean moved to Los Angeles to live with his long-term girlfriend. He’s currently back in school majoring in Music Education. He’s founded the new vocal group Veritas and has gotten back into his groove with writing and arranging. In addition to studying and singing with Veritas, he also teaches at the Los Angeles Braille Institute and is a part of Theater By The Blind, which writes and performs original plays and musicals with an all-blind cast. Sean is excited to keep things moving forward in sunny L.A.!