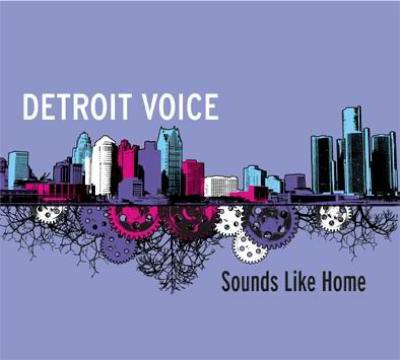 In the abstract, high school a cappella calls to mind certain attributes. Youth. Exuberance. Energy. Things that tend to dissipate as we all pick up responsibilities, 15 pounds, and wrinkles. While the young may often be filled to the brim physically with frenetic energy and intensity, they aren't always able to showcase them on tape. Which brings me to Detroit Voice.

This mixed high school group has an admirable goal with its album Sounds Like Home — to celebrate "Detroit-inspired music from throughout the decades." As the tracklist suggests, Detroit-centric popular music is owed much respect, from iconic locals (Aretha Franklin, The Supremes) to pioneers of the Motown sound (The Temptations, Stevie Wonder). Songs stamped with this sound have endured from a time long before the members of Detroit Voice were born. What makes the songs last, though, is the main thing absent from this album. Feel. Groove. Swing. Heart.

The common soul of these songs involves heartbreak, true love, or hardship, things which may be hard to relate to or tap into for young singers. A lot of the arrangements here, including a few from Nathan Altimari (Just My Imagination, Care) and even music director (and former RARB reviewer) Brian Haverkate (Signed, Sealed, Delivered), are queued up for success, with all the right elements built in. The charts have color, they have swing, they evolve. Unfortunately, the singers are generally unable to capitalize on these elements by tapping into their natural physical elements.

The best song on the album, 4 Minutes, is a rare shining moment where they do precisely that. The group seems the most invested and energized here, perhaps because they enjoy singing it more than anything else on the album.

The group gets close with Chain of Fools, where the group shows a little bit of Motown swing led by charming soloist Mason Van Gieson. For much of the remainder of the album, however, the songs are just too straight and lethargic. The rhythms intended to spark or showcase energy in several arrangements are just woodenly read from the page, resulting in a strange clash with the listener between what could have been and what actually is.

I'm not looking to pick on these kids; they sing cleanly and accurately, and they are generally in tune. They just don't sound like they mean it or care often enough. There are plenty of correct notes without much more behind them. Most of these songs require the soloist, at the very least, to bare his/her soul, and except for Van Gieson, Haverkate on Care, and Saaja Rayford on 4 Minutes, none does so here.

One of the best things about high school albums is the raw potential, and Sounds Like Home is no exception. These kids have a solid start with promising voices, and a music director who has clearly guided them in the right direction by helping them choose good arrangements and capable production. They just need to tap into something more, something deeper. Being a teenager is about feeling everything more strongly than you may ever feel anything again. If Detroit Voice can find a way to translate that to tape, the singers will capture and produce something truly special.

Detroit Voice's Sounds Like Home is a yearbook album in concept album clothing. Yes, the group presents the promising theme of Detroit-related artists, and this does tie the tracks together. But Sounds Like Home somehow feels like a final concert of the year from a solid group. The album isn't live, but most tracks feel as if a pop choir's live performance was perfectly mic-ed, carefully enhanced — especially in the backs and vp — and then presented to us for our approval. We can't hear applause, but we can almost hear where the group hopes the applause might come. Of course, what garners such a positive reaction in a presentational concert, a public space, is only rarely what makes for excellence in the breathlessly intimate space of an album.

As if nodding in assent to that view, the last track 4 Minutes is an outlier on Sounds Like Home. More heavily produced and instantly more listenable than anything else on the album, this farewell track seems to say "Oh by the way, before we go, we wanted you to know that do know how to make a slick recording; we simply chose a different route on the other nine songs."

Detroit Voice has nicely sidestepped the pervasive problem of over-airbrushing, of killing all humanity in an attempt at achieving perfection. Sounds Like Home captures these singers on their hypothetical best day and it is a good day. The group phrases well and this always adds an extra measure of enjoyment to the tracks. And the more choir you like in your oldies-rock, the more that phrasing and blend will carry the day for you.

Leads, in general, feel challenged by their solos. They all partly step up to the challenges, but we don't typically get the sense that this is just what they do, an extension of their hearts and souls. It's a solo, perhaps one auditioned for or assigned. Some parts are well-matched, some expose weaker elements of the singers' skill sets.

For those with a true love of Detroit, I'd add this to your collection. The theme plus the best elements make this a worthy purchase.

For my first listen of Sounds Like Home, I hadn't looked at the album's liner notes and had never heard of Detroit Voice, so I went in without any preconceptions. What I heard was a group of solid, talented vocalists who excel in R&B and soul. What I didn't know, at the time, was these talented vocalists are all high schoolers — kids these days, right?

Sounds Like Home starts really nicely, with a spirited version of Chain of Fools (the excellent Firedrill! arrangement). It's not easy to pull off a strong Aretha, but soloist Mason Van Gieson gives an admirable interpretation. From here, it's into Temptations territory — Detroit Voice's Just My Imagination takes a while to get going, but once it does it's a treat.

The concept behind Sounds Like Home, showcasing the superlative talent from the city of Detroit, is a terrific one. Not only does it serve to educate about the city's musical history (who knew Madonna was from Michigan?), it provides a nice connecting thread that is certainly more ambitious than anything else I've seen from a high school group. However, there were some suspect repertoire choices on the album. I'm sure that the Roger Emerson arrangement of I Wish does great in concert, but there's still no reason to add it to in album that is distinctly contemporary in character. The Firedrill! and Boyz II Men transcriptions seem considerably less out of place on the album and are even welcome additions.

One of the major problems with Sounds Like Home is the fact that a lot of the original arrangements lack spark. Signed, Sealed, Delivered, Can't Hurry Love, and Care are all rich and varied songs, but here they end up sounding dull and lacking the original spin that the Firedrill! and Boyz II Men transcriptions provide.

Detroit Voice, under the direction of former RARB reviewer Brian Haverkate, is clearly one of the most exciting high school groups in the country. While their talent and charm do not necessarily extend to the creation of an exemplary contemporary a cappella album, it certainly does make Sounds Like Home an impressive achievement in the high school a cappella scene.

In addition to CD Baby and iTunes, this album is available by contacting Brian Haverkate at bdhaverkate@clarkston.k12.mi.us