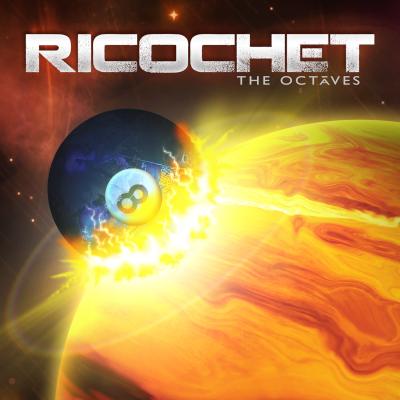 The Octāves are back! Okay, well, they never actually left, but their latest album Ricochet harkens back to what I consider the glory days of this group. That circa 2005-2007 timeframe where almost everything clicked into place and the group produced two great albums and a multitude of stellar tracks. Like a boomerang, the guys have ricocheted from the missteps that made More Love Faster such a disappointment to me to record an album that lays the groundwork for the making of a masterpiece if future albums take it to the next level. Get it and experience the joy right along with me.

Everything about this album reflects a devotion to excellence. Producers Dave Sperandio and Jared Feinman pay close attention to every detail and wring out subtle nuances throughout the album. The production was aided greatly by Danny Ozment's understanding of the group's sound and musicianship while in the studio. As has been stated before by professionals in the industry that I've worked with, when performers go into the studio and end up with near perfect tracks, it makes the rest of the production chain's jobs so much easier to create the magic sound expected of top-notch albums. Tom Anderson's editing of several of the arrangements and inclusion of his current brilliance on three other tracks has captured the magic of these guys' voices from backgrounds to soloists. Each arrangement is infused with energy and relaxation that gives the album a nice emotional arc.

The three main soloists (Al Califano, Jackson Taylor, and Chase Brightwell) all have an emotional sincerity that provides a vitality and depth to their particular songs. Plus, an even better accomplishment is that they each have a variety of vocal skills at their command, enabling themselves to adapt their style and vocal quality to the requirements of their respective songs. Take for example Chase Brightwell's longing country twang tugging at the heart during Colder Weather, which he then turns around on the very next track Too Close to rip out an aggressive pop/rock swagger.

My three favorite tracks are Basket Case, No Church in the Wild, and Oh Oh Oh My My My. Each has a sultry vibe that entices listeners to pay rapt attention to what's going on in the song. Califano leaves it on the floor on Basket Case with his stunning pathos permeating throughout Sara Bareilles' ode to longing. The performance is filled with emotional honesty reminiscent of Matthew Schoeneck's recorded masterclass on the subject with his rendition of The Blower's Daughter off of Give Us Back Our Spyplane! by the MIT Logarhythms.

And Sean Brewer. Good lawd. Those are some joyously soulful pipes that's he's got. It sounds like every note, every phrase, every breath falls from lips effortlessly. I didn't know Oh Oh Oh My My My before hearing The Octāves' recording. I'm completely smitten. Engaging and uplifting in every sense of the word. The jazzy quality is almost Take 6ish in its fluid motion from section to section. It's just yummy — especially with the inclusion of a snippet of Hava Nagila right after the bridge.

Then there is No Church in the Wild. This phucer just stomps and smashes and enthralls. It could have pumped just a little bit more, but it's still a very satisfying listen. It also contains some of the best use of vocal distortion that I've heard in a long time.

The Octāves are almost there. Some of the arrangements are still pedestrian even with Tom's guiding hand. Syllables are odd and distract from the intent of the song. Sometimes the boom pow doesn't slap you as hard as you probably deserve. And all of the soloists can ratchet up their solo performance just a notch or two to really have us bouncing off the walls. It's in them. And I'll be sitting here waiting.

Ricochet is one of many collegiate albums that features more interesting production choices than singing choices. It is what it is, and some of it is pretty cool.

The Octāves certainly got their money's worth on the mixing here. It's all good from the many pros present, but holy smokes, give Grandma some ibuprofen before she turns on Tat Tong's tunes (Never Close Our Eyes and Too Close). The choruses on Too Close somehow overpower the trippy original, and the original built a following on the treatment of those choruses. I am just worn the hell out after listening. But the complexities and creative zing of Never Close Our Eyes is even better. I love the demon sounding bass section singing "ooo vot dot" through the heavy production, which accompanies the perfect arrangement from Tom Anderson. It all blends together into a big bowl of hotness.

In our digital era of cherry picking songs, I suppose it's fine that Ricochet has such a crazy track list of assorted genres, but those of us that like to/have to listen to albums from end to end will have a hard time getting into Ricochet as a full creative idea. However, from end to end, Ricochet has an abundance of fun and spunk, so there's that. Example: Hold On Loosely. We've probably all rocked the crap out of this song in the shower or at the karaoke bar, but now you can have a whole gaggle of guys rocking the crap out of this song right on the edge of still acceptable pitch and control! Finally! Kinda makes me wish they included only uptempo/party songs on Ricochet instead of the weepy pining fare, because there's energy and party drinks to share with this group. Yes, I get a little caught up in the novelty of a soloist who lets himself lose a bit of emotional control and lets the heartbreak of the song take over as Chase Brightwell does on Colder Weather. But, Everybody Has a Dream indeed; sweep those sappy Billy Joel howls right outta here and drop in more fatty Club Octāves, please. Pump up the JAMZ. At least it starts and ends right: The Show Goes On is excellently crafted and showcases a fabulous lead from Bennie DeSalvo, who has a real knack for the rhythmic accents and vocal pulse required in rap.

And hey, it's cool to see arrangement editors employed on Ricochet. This doesn't happen much in the collegiate scene, but oh if it did. I also appreciate the songwriter credits in the liners, and the group still managed to have room for a written introduction, a Thank You section, and an eight ball crashing through a celestial body. See, it can be done.

There's a few tracks here that will wildly delight a cappella people, so work on buying these without haste.

Good from beginning to end ... with some unexpected flavor that brings it all together. Yes, I think I'll kick off Ricochet with this statement.

The men of The Richmond Octāves have indeed produced an impressive album. Before one is even drawn into some sincere emotions by soloists, subtle surprises in the arrangements, and a stellar backing group to execute a full sound, the production work is easily the first element noticed. A wealth of talented engineers have indeed made Ricochet one of the cleanest sounding albums I have heard in quite some time. With this, the sound is not too produced to where you forget that voices are the only instrument.

I have to give acknowledgement to both Jared Feinman and Tom Anderson who had a hand in arranging the majority of the songs on Ricochet. Although half of the songs on the album are ones that many groups are currently covering, these two individuals manage to bring something fresh to the table. And when they are not adding some type of twist to arrangements, they still manage to amaze you with lesser known tracks.

Too Close is without question one of the more heavily covered songs out today, yet the intro and breakdown sections alone have catapulted The Octāves' version into my new favorite slot. And Chase Brightwell truly delivers the solo, having the necessary range and energy which the song calls for. My favorite track is definitely Everybody Has a Dream (originally by Billy Joel). I'll be honest, I had never heard this song until I listened to it on this album, and only one phrase comes to mind afterwards ... "these boys took this song to church." I really enjoy the chord structure of the song as well as the backing choir effect that the group creates. The Octāves men definitely show that they have a soulful side and the necessary depth needed to switch gears at a moment's notice.

Oh Oh Oh My My My has me groovin' with the Octāves who receive help here from The Sirens. The Show Goes On is very well-developed and upbeat, making it more than just your typical hip-hop track, with a good rapper, too (this does not always come across in a cappella music). And so many more things were just right with this album.

The only thing that really keeps me from marking this album a "5" is mainly a testament to the group's energy and fairly average soloists. Energy is easily present on Ricochet; however, at times it feels a bit contained with little dynamic contrast. I am speaking across the board, not so much individually. And there are indeed standout soloists, but average ones seem to be the majority.

All things considered, this is a well thought-out album by a group of strong performers. Ricochet will be regularly played on my iPod from now on.