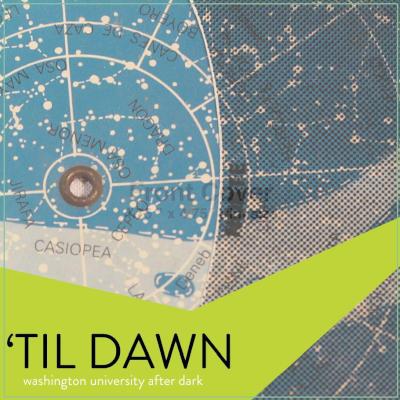 After Dark is getting dangerously close to slipping too far back in the pack, and that's no place to be for the funky kids from Washington U. Long shots of lethargic singing, a shortage of rock-em-sock-em risky leads, arrangements largely from one principal arranger that are generally suitable but not remarkable, and inconsistent audio work don't help the cause on 'Til Dawn.

This is a group who definitely sounds best when tasked to sing loud, big-mouthed, joyful noise (which is why Undo It works well), which is actually when a lot of collegiate groups sound their worst because blend falters. But enjoy After Dark's group control and good intonation when it hits this style, especially at the 3:09 mark of Rolling in the Deep (if only the whole album had such sizzle instead of the very last 45 seconds!). It's the more subtle, quieter performances that need intensity work to hold listener interest, like This Woman's Work (when the upper backs sing "I know you have a lot of strength left", it just sounds so terribly unconvincing, which is obviously not the emotion to carry for such a statement). So they are good loud singers, but not good soft singers.

As for the album's mix, the levels need more refinement. The backs are too loud, then the backs are too quiet. The soloist is muffled, then the soloist is disconnectedly popped. Dynamics sound artificial and the vocal percussion is receiving a treatment that got pushed aside about ten years back. To hear all of this in one track, play Resistance all the way through on your headphones. I guess the problem is a little personal; we're so used to boundary-breaking studio work at RARB that anything even shades less gets a head tip. It's not bad, it's just not what's possible.

Yet there's something artistic about this release, about all of After Dark's releases. The meatier message-driven song selection, the cohesive group blend that ebbs and flows as one. That's the intriguing aspect of After Dark; that's what makes it hard to turn off.

So you can pass on 'Til Dawn, but don't pass on the group.

Washington University's After Dark has left me a bit unsettled with its latest work 'Til Dawn. Production work is good, song selection is varied, and collectively, soloists are better than average. Yet, as a whole, the project seems a bit standard with few surprises.

After Dark delivers a well-polished group sound on 'Til Dawn that signifies a cohesive bunch of talented musicians. The shining star on this album is indeed the chemistry the group was able to conjure up and portray in the studio. Although this blend is well-received, at times the sound comes across as a bit contained and suppressed. Most notably, this resonates in Promise This and Undo It. Promise This is packed with good vocal percussion, it is a unique song choice, and the arrangement has texture. Where it comes up short, likewise with Undo It, is in the delivery of the backing vocals; energy is not entirely leveled with the soloist.

Another area of concern is the idea of one major arranger. I applaud Missy O'Brien on having involvement in eight of the eleven tracks on the album. The struggle with this, however, is that a great demand for fresh and varying arrangements becomes present. After a while, some tracks seemed to blend together as I was listening, leaving me with little standout material.

But this in no way brings fault to the other factor O'Brien brings to the table: a powerful lead voice. Both Bottom of the River and Rolling in the Deep are two intensely solo-driven numbers with well-developed arrangements that show off O'Brien's spectacular voice. The other truly remarkable standout is the Kate Bush/Greg Laswell cover of This Woman's Work; Jimmy Li's solo is so spot on and is filled with much conviction. What also truly adds to this arrangement is the appropriate use of silence throughout, at the right moments. Bravo!

I would be remiss if I did not point out the variance in song selection on this album. Aside from a few standards that many collegiate groups are covering currently, this album has a lot of depth in the genre department. Say When, Promise This, and Soon We'll Be Found are appropriate additions to the entire project that were a bit unexpected but show the group's versatility.

'Til Dawn is a well-put-together album by a good mixed collegiate group. While it may not hit every note right, it definitely has a few moments of creativity and solid singing.

'Til Dawn, the fourth studio release from After Dark of Washington University, is two steps forward from Eclipse after having taken three steps back with Aftermath. Missy O'Brien provides some fantastic arrangements for After Dark to sing. The soloists are very well suited for their songs, whether it be the effortless, haunting delivery (with O'Brien's Bottom of the River) or the soul-cleansing performance of This Woman's Work. Ben Lieberman's production is forward and tight, easily lending itself to some very tasteful enhancements and nuances to individual tracks. This album is a standout in the mixed collegiate a cappella arena.

Delta Rae's Bottom of the River is a dark, creative arrangement by Walker Hope that is different enough while still staying true to the original. The clever musical quote from the African American Spiritual Wade in the Water for the coda section is a nice touch that helps lead the listener's ears forward. O'Brien's arrangement of Muse's Resistance combined with the emotional delivery of Nathan Duke perfectly capture the heartbreaking nature of the original. A bold and forward take by Amanda Nipper, coupled with the female backgrounds on Carrie Underwood's girl-power anthem, Undo It, gives Carrie a run for her money!

The juxtaposition between Undo It and the track that follows, Kate Bush's This Woman's Work, is easily welcomed with a haunting reinterpretation by O'Brien and Hope. After Dark alumnus David Giles' adaption of Ingrid Michaelson's Parachute is powerful and textured, filled with emotional intensity.

There are a few shortcomings, such as the overdone Shark in the Water and Rolling in the Deep, which are made bearable only by their clever arranging. Having a male lead on Promise This by Cheryl Cole really detracts from the gentle nature of the Adele cover that inspired After Dark's version. Tracks like Soon We'll Be Found, Bleeding Love, and Say When seem to just toil onward monotonously, never leading us anywhere in particular. Regardless, these issues are minimal and more than forgiveable.

If you don't already own 'Til Dawn, I wholeheartedly recommend it. After Dark has produced a truly artistic and brilliant album. It was a pleasure to listen to and review to this album, and I can guarantee I will be listening to it for a while.

To order a physical copy, please e-mail the group at washu.afterdark@gmail.com.