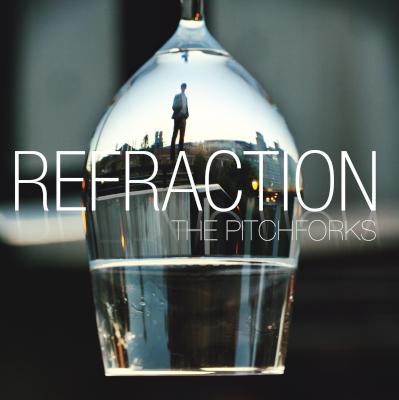 The ephemeral nature of collegiate a cappella is never more evident that in the litany of recordings that come our way from a particular group. It's fascinating to bear witness to the historical ebb and flow of the group's successes and failures. Or, to see where their plateaus take them next.

The Pitchforks from Duke University is at such a plateau in its history with its latest recording Refraction. It is an average album for them, meaning that it is really good and better than most male collegiate recordings out there. But it isn't really in the exceptional/excellent range — save for a few interesting tracks and the two original numbers. A high "4", yes, but a "4" nonetheless.

The Pitchforks continue with their two-punch offering of originals. One is pop-laden with a country sensibility (Alex Brockhoff and Chris Waybill's Surprise Me Tonight), and then more atmospheric and esoteric serving, Refraction, also by Waybill. Surprise Me Tonight plods along during the intro until its propulsive delivery after the bridge that really opens up the depth of the writing. I was surprised. Refraction is a bit of a disappointment though, like an afterthought to close out the album. They could have done that by ending with Holocene which accomplishes the same stylistic choice that Refraction was headed towards.

Because it is the expansive songs where The Pitchforks excel. Holocene is brilliant from arrangement to execution. And the proceeding track Moth's Wings is just as compelling. But the song that set my ears aflame is Hallelujah. Yes, I did just write that. It's not that different than the myriad of other versions out there. There are even some motifs from TakeNote's sort of definitive offering these many moons ago. Yet, The Pitchforks infuse new life in their rendition and go directly into my heart. Part of it is the five interwoven soloists throughout ... their voices meld so effortlessly that you'd think it was one voice. But it is really all the joyful noise that hits us around the 2:55 mark and just lays one flat. Kudos doesn't been to explain the experience from listening to this track.

Here's my diatribe for the day: the original songwriters are saddened by the fact that their work isn't mentioned anywhere in the liner notes. The group who made the track famous is credited, but the information stops there. Having worked with members of the production team (who are individually credited) and knowing the requirements of most duplicating services, I'm sure that they have acquired the necessary licenses to perform the songs. And considering that they credited the photography work they used for the album, I'm dismayed that no thought was given to include creators of the base work from which their art was derived. And the inclusion of the poem on the underside of the shell is genius — albeit a bit twee for me — but, yet again, the creator(s) of it aren't mentioned anywhere. It reads a bit incomplete. I'd love to discuss it with the author(s) if I knew who wrote it.

No need for a witty closer right here. If you like male collegiate a cappella, Refraction fits the bill nicely. Get it, enjoy, and bask in those expansive tunes.

Looking over the track list for Refraction, the newest offering from the Duke University Pitchforks, it's no surprise to see songs originally by Cee Lo Green, Queen, fun., and Kanye West; these artists deal in explosive bombast, and bombast is what The Pitchforks do best. So strap yourself in, and enjoy the ride!

Refraction is a supremely professional effort. The production is top of the line, the group excels with its blend, and the songs crackle and pop with energy. I always feel I'm in the hands of professionals while listening to The Pitchforks, knowing that the group will avoid train wrecks and keep everything on an even keel.

So why the "4" rating? For all intents and purposes, The Pitchforks have essentially rereleased their previous release, All In. The expansive sound, contemporary pop repertoire and huge track list (seriously, the album is long) have carried over from All In, but there's no real sense of building on the group's previous achievement. I know the contemporary a cappella scene, particularly collegiate a cappella, isn't exactly known for its ambition, but a series of competently performed pop covers being recorded over and over again seems like a recipe for diminishing returns. The Pitchforks, as I mentioned earlier, embody colorful extravagance so they've already got a distinguishing feature. It would be interesting to see the group tackle something a little more ambitious using this concept — some sort of connective thread, maybe, or going all the way with a concept album.

This is "next level" stuff, though. Fans of The Pitchforks will likely dig Refraction with the same fervor as they did for All In, and there's plenty to enjoy here. Sin Documentos is an exceptional standout, bringing a much-needed infusion of excitement to the repertoire choices. All of the Lights is equally well-constructed, providing a dynamic arc. Holocene is suitably dreamy, and it's one of the better a cappella Bon Iver interpretations I've heard.

The Pitchforks are one of the best collegiate a cappella groups in the world today, but with the group's ability comes an expectation of great things. Refraction is very good, but its moments of stagnancy and excessive length keep it from reaching classic status. The good news is The Pitchforks have the skill to produce a modern classic; here's hoping the next release hits the mark.

Refraction is an apt title for the latest release by The Pitchforks of Duke University. Who and what The Pitchforks are is filtered through genre, arrangement, and studio production to expose all the elements, both good and bad, that make up the substance of the group and its members. The group's passion and hard work stand out most starkly. These gentlemen are clearly dedicated to creating high-quality music together and have the vocal talent to back it up. The album isn't perfect; they manage to get most aspects right most of the time but do fall short occasionally.

Arrangements can make or break an album. Though cracked in places, this album features arranging that is far from broken. Sustained "ooh"s and "ah"s are well-balanced with rhythmic backgrounds. Paradise starts the whole album off with beautiful "eee" vowels that set the tone for the string section feel that permeates the album. Surprise Me Tonight, All of the Lights and Moth's Wings show a trend toward repetition. Actual lyrics in the backgrounds would be a welcome relief. The strongest arrangement on the album is Hallelujah; it's powerful, diverse, and distinctly their own. With just a few tweaks, this track could be one of the greats.

The production is less than ideal in today's a cappella scene. It's very good, except for the mix. This album covers the full range of studio possibilities. Paradise, Bright Lights Bigger City, and Some Nights are distortion-happy and bass-heavy, though with clearly-heard solos in the forefront. By the time we get to Holocene and Refraction, the solos are over-powered and muffled while the distortion is reduced and the upper voices are able to shine through crunchy chords. Luckily, the soundscape shifts gradually and there are gems in there. Bright Lights Bigger City, Wagon Wheel, and Hallelujah have the right balances, though they sound like they are from three different albums.

The performances are generally strong. There are times, such as in Somebody to Love, in which the high tenors just don't lock in; the third and fourth words of this song just don't sound good. The tuning sounds imprecise as the album reaches its later stages, which I attribute to the production rather than the talent of the singers.

The cracks are there, true, but the musicianship and sheer joy of harmony makes this an album to respect. Any casual listener would find little to no fault in the overall sound. From beginning to end, the songs flow together beautifully. Yes, styles shift, but it's only evident when the tracks are played out of order. The exploration of arranging plus song and production options, despite the flaws it highlights, lends Refraction a certain charm. Buy this release and get to know the real Pitchforks.

To order physical copies of the album, email Benjamin Ward at bfw at duke dot edu.