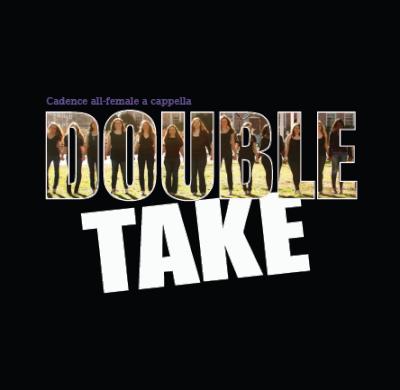 Double Take by the ladies of Cadence from the University of North Carolina is a testament to what a solid, rehearsed studio sound should be. Backing vocals for most tracks are clean and soloists range from fairly decent to good. However, in the midst of what is presented, no developments are heard to further the realm of female a cappella.

Double Take comes across as solid work for a group who may be new to the world of recorded a cappella. And it is in these similar newcomer decisions that problems arise. Multiple tracks lie too close to the same wavelength of feeling and intensity, causing only a few selections that really stand out. Parachute, Locked Up, and The Hardest Part are all numbers that feel, at times, as if they are battling for the listener's ear to hear something different than what has already been presented. What is also noticeable, is that some of the soloists' deliveries seem a bit tame or reserved. I Wanna Dance with Somebody and Locked Up are the two tracks where the soloists seem to be holding back a bit, either in terms of personal conviction or from reserved energy. Had these elements been remedied, these songs would have had a bit more edge to them.

Mash-ups are another common avenue that groups travel down. While The Haunted Scientist has a good concept with really strong backing singing, a bit of the message is lost as soloists trade-off phrase after phrase. This proves to be distracting at times from a lyrical connection standpoint and isn't very pleasing to the ear when both leads carry their solos very well.

There are some good moments on Double Take, mainly when the group really changes things up, like in the dark tones of No Light, No Light which has cool studio effects and heavy percussion. I also like Dog Days Are Over, which shines as the top track, incorporating the cleanest production work and an appropriate soloist who is able to switch from raw and energetic singing in the chorus to soft and convincing notes in the bridge.

I think that aiming more towards what's nonconventional will help the ladies of Cadence in the long run. They have showcased that they indeed have potential, and I believe that it is only a matter of spending more time developing it.

Double Take is the full-length debut album from UNC Chapel Hill's Cadence, and it just sounds like a first album. It is a fairly average recording for an all-female group: songs by female singers abound here (there are two songs each from Ingrid Michaelson and Florence + The Machine), as do aca-faves like Coldplay (two songs by them, too). The result, unfortunately, is an album that's fairly flat in tone: these songs all sound roughly the same, and with little dynamic range within each song, the album just drifts into mid-tempo, mid-volume sweet sameness.

Individual songs do have their moments. The arrangements for Locked Up and The Hardest Part have some interesting nuances if one listens closely enough; they're just lost in the monotony of volume (both from the soloists and the backs). (As an aside, the arrangers weren't credited on the album, but it appears from Cadence's web site that most of the songs here were arranged by members or alums of the group.) It's unfortunate, but these repetitive tunes are the better ones.

The less compelling songs all have more serious issues. The Haunted Scientist is a mash-up of Taylor Swift's Haunted and Coldplay's The Scientist — by singing both songs simultaneously. It's a hot mess. As unvaried as the group's repertoire is, that is Cadence's wheelhouse: trying to do a more energetic or rock number (25 or 6 to 4 or No Light, No Light) has mostly disastrous results. These are the types of performances that used to give all-female a cappella a bad name back in the day, and Cadence can't seem to rise above it.

Soloists are spotty throughout. Bottom of the River doesn't have enough soul, I Wanna Dance with Somebody doesn't have enough power, and most of the other songs just sound generic. I can't quite lay my finger on it, but it feels as though many of these soloists are interchangeable: any of them could have sung any of these songs, or any other song by any of these artists could've been substituted in for the tracks here, with mostly the same result. It's unfortunate, because the women in Cadence actually sound as though they're trying here — all singers seem fully engaged in the recording, and there is some energy here that fits with the mood of these songs. It's a strong start dampened by unimaginative repertoire and a flat recording tone, and I hope that the women of Cadence will learn from this result — and from the wealth of other, more varied all-female a cappella out there — to pull their talent into a more interesting product next time.

I approached Double Take with a healthy dose of skepticism — two Coldplay covers? In 2013? And one of them is a mash-up with a Taylor Swift song? Multiple takes on Ingrid Michaelson and Florence + The Machine from an all-female a cappella group? The whole thing seemed to have the potential to be the most boring a cappella album of all time.

Well, I'm pleased to announce that my hyperbolic fears were mostly unfounded. Despite some shaky songs (yes, the mash-up included), the women of Cadence worked out a competent, if unremarkable, a cappella album. It's a little below average, but it's nothing to get upset about.

The one-two punch of Florence + The Machine is probably the album's high point; Cadence never sounds better than when they're interpreting Florence's creative soundscapes. No Light, No Light's atmosphere really lands, and the group's backgrounds are at their tightest on Dog Days Are Over. Bottom of the River is also a great showcase for the vocal talents of the group, which are too often hidden in other songs.

Cadence has a soloist problem. Other than a few exceptions (Cameron DuBois on Bottom of the River, Elise Hopkins on Locked Up, and Becca Scarlett on Dog Days Are Over), the soloists are either poorly suited to the songs they're performing or have serious intonation issues. Soloists are the main selling point for jukebox-style contemporary a cappella groups, and when the soloists lack luster the whole thing ends up sounding more and more like a mediocre karaoke night.

Double Take is an album that lacks ambition. There is no innovation or interest in the song choices, and the arrangements are as generic as I've heard on a complete album. Other than one rather uninspired mash-up (which, at times, feels literally like two different arrangements were just mashed together into one without any regard for musicality), Cadence takes no chances with its material. It's a shame, because the strong vocal performances on Delta Rae's Bottom of the River shows that Cadence has the potential to do remarkable things.

Cadence is a group with promise, but there is little on Double Take to excite today's contemporary a cappella listener. Hopefully future recordings will take Cadence's skill and apply it to material that better suits the group.