The Society of Orpheus and Bacchus 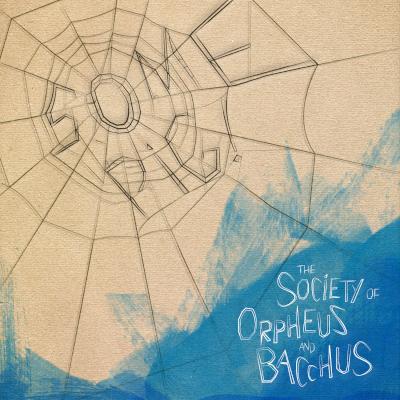 So this is barbershop for 2013 — walking "bum bum bum!"s and "scooby-doobie-doo!" action, and many big "ta da!" style endings — but with a slightly more modern audio result. Since this is the SOBs preferred and predetermined set up — sans vocal percussion and the associated production racket we're used to in our community (I say "racket" lovingly) — good for them; let's not discuss the absence of technological features that aren't relevant here.

But I will make strong mention that for singing that snappy good-old harmony, this 23-voice barbershop chorus ain't making nearly enough noise to sustain interest over seventeen tracks. I should be blown out of the sky with this many voices on each track. I should be saying, "My goodness, my poor speakers can't handle this much testosterone and volume!" Instead, I'm wondering if half the group wandered away during recording sessions. It's largely restrained and subdued, and in order for this genre to compete for attention in our highly processed modern soundscape, it's gotta be really, really razzly flipping dazzly on the vocal front: chords that slice like swords (knives aren't big enough), dynamics that shock with range and intensity. This needs to be as theatrical as Ice Capades. In fact, this should be the vocal version of Ice Capades, whatever that means. When you're being goofy, still sing like a musical badass; it'll go over well. For convincing theatrical direction, I point to groups like the Academical Village People, On the Rocks, and Six13. Except the SOBs predate all of these guys, so maybe they can blaze a new high-energy path.

What the SOBs are doing right for this genre is truly constructing the arrangements with hammers and nails; there are musical surprises around each bend — tempo changes, key changes, style changes — and while this might be too much for modern machine-engineered a cappella, it's absolutely necessary here to provide the sonic shifts we need to stay tuned in. Otherwise, it'd just be off-the-rack transcriptions, and without any of the production treats we're used to, I'm sure it'd be a real snoozefest. But Some Pig! isn't a snoozefest: it's just too darned calm. Somehow, there is a soft "Amen"! in Early in the Morning and an awesome voice-of-God bass that's rather mildly musing about the trumpets blowing. Shouldn't be hard to muster up the right energy in a piece with built-in directions. In the final seconds of Early in the Morning the group finally throws open the Gates and gives us vocal Hell, so to speak, and I'm not just talking about the big volume boost; I'm talking about the right feel and shimmering locked-in chords, finally. It might be a fun exercise for the SOBs to arrange a metal song just to see what's bubbling beneath these guys. It's time to get crazy, like they're doing for Motherless Child. Now there's some intensity! There's some swords!

It's been quite a journey for the SOBs, and Some Pig! really captures this group's legacy. It needs more vocal oomph, and would benefit from a more focused track list, but the history speaks for itself. 75 years and counting...

Some Pig! is remarkable in that the men of The Society of Orpheus and Bacchus (the SOBs as I will refer to them) are among a handful of groups who prefer a more natural sound, versus one laden with heavy percussion or effects. Where most collegiate groups tend to stay the route of Top 40 selections, the SOBs showcase a myriad of tunes, most of which have never seen any form of a cappella airplay (at least to my knowledge). While this type of old-school sound from a bunch of young guys should indeed be commended, the majority of Some Pig is hit-or-miss, oftentimes being the latter.

Some Pig! is technically sound: tuning and blending issues are very minor and production work is fair. Somewhere in the conceptualization stage is where the SOBs lose me. While most songs fall between the three to four minute mark, I think the idea of packing seventeen tracks on this album should have been reconsidered. To include such a great amount of tracks requires a vast amount of diversity to keep the listener interested in what's coming next. Most songs on Some Pig! came and went and hardly left any impression on me. This could be attributed to the limited dynamics as well as the repetitive feel of songs throughout Some Pig!. A possible remedy for this issue is simple and minute features that really make the listener take notice, such as the minimal vocal percussion in the breakdown section of I Wanna Be Like You.

Two elements that the SOBs do have a knack for are humor and jazz. Friend Like Me, I Wanna Be Like You, and That Cat is High are clear standouts on the album. The first two are both fun to listen to and have a certain comical appeal that translate really well in the studio. Also, the SOBs do not mind tackling quick rhythms and jazzy chords. But the clear jazz winner and my favorite song on the album is That Cat is High. Fluctuations in dynamics, strong and appropriate soloists, and even a ragtime feel are all present in this track. This is indeed a well put together arrangement.

The SOBs also do well in storytelling and transitions. John Henry is nicely delivered mainly through contrasting dynamics, which bring the song and story to life. Old Songs is impressive in that transitions are clean and at times you may forget that you are listening to multiple songs. With these two, the SOBs are really compelling and capture the art of being truly entertaining while performing.

While there may not be a great need to make your way over to iTunes for Some Pig!, it does offer a ton of toe-tapping and finger-snapping selections. If nothing else, the SOBs will bring a smile to your face with at least a few of these songs.

Some Pig! is the twenty-first album released by The Society of Orpheus and Bacchus, a group of twenty guys from Yale University. Performing repertoire that dates back to the late 1930s, the group prides itself on paying homage to their roots. Having a strong foundation of traditional choral singing and barbershop harmony and a production team consisting of some of the best in the industry (Ted Trembinski, Nick Girard and Dave Sperandio), Some Pig! is a "contemporary" a cappella album unlike any other.

Some Pig! begins with a vibrant cover of Don't Stop Me Now but unfortunately the soloist doesn't quite do justice to Freddie Mercury's performance. The issue of soloists not quite meeting expectations is also present on tracks like Feeling Good and Hallelujah, though this issue by no means permeates the album. Two of my favorite tracks on Some Pig! are When You are Old and Grey and Fake Plastic Trees, a barbershop quartet and trio, respectively. The latter is stunning and perfectly exemplifies a cohesive fusion of old and new. Fake Plastic Trees is rearranged in 3-part barbershop harmony, perfectly capturing the intimacy of the original in a completely different way. I would like to see more tracks like this with their next release — a fusion of old and new would appeal to a much greater audience.

Much to my dismay though, the brilliance of the aforementioned is one of only a few found on Some Pig!. Tracks like Higher and Higher, Early in the Morning, That Cat is High, and Old Songs are all arranged in a very similar style of bass line, homophonic background voices, and a soloist. While this is characteristic of the style that the group is accustomed to singing in, it becomes trite and unoriginal very quickly.

The Society of Orpheus and Bacchus and its hundreds of alumni should be proud of this release. Some Pig! follows suit with the twenty albums that have preceded it. Is this a good thing though? I'll let you decide.