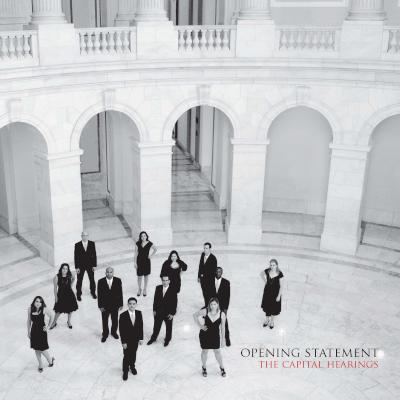 Jack of all trades; master of none. Such is the danger of pure diversity in programming. Many an album has lurched awkwardly from style to style, and like a pathologically wandering lover, foolishly foregone depth for variety. But despite The Capital Hearings' varied track list, they are that rarest of exceptions to the rule. Though The Capital Hearings do occasionally lose their center, tipping too far to a genre outside their strength, they also do something extraordinary: by merging classical and contemporary sensibilities, they begin to create a distinctly unified and truly refreshing sound. Opening Statement is the first step towards a fascinating and beautiful artistic statement.

At their best, The Capital Hearings mold singers and material equally. Where the music is contemporary, they add a classical depth and sense of line. Where it's classical in nature, they add contemporary flourishes and a modern sense of genuine intimacy and authenticity.

Displaying exceptional blend and balance, the singers effect an almost effortless grace that's all too often lacking in over-processed contemporary a cappella. It shows in both performance and color. It isn't darkness of tone, but unity of tone color. The Capital Hearings are freer with vibratos from time to time, but in a pleasing way, never sloppily and never when the chords demand a straight tone for effect. The choice of balance does slightly favor the sopranos, bringing them back to the prominence they held before the 20th century. Here, a slightly more mellow EQ setting would sometimes have been welcome on the louder sections. But overall the group's sound is surprisingly rich for an ensemble so based in naturalism.

The programming wisely leads with strength. Ensemble singing makes up the core of the first two tracks. Next, Earth dances with a polyphony of parts that begin to sound as if their roots were indeed classical instead of indie. Against all odds, Here Comes the Sun, a classic rock track, sounds just perfect being mashed up with Debussy's Claire de Lune. And when rock is called for on Light Up the Sky, a kickin' lead and intense backs bring the needed edge. Doubting Thomas is both raw and beautiful, filled with spinning soprano and whispery tenor.

Not every track manages such a careful balance, though. Blue Skies is a misstep. It lands squarely in the realm of jazz, calling for that genre's expertise. It's not badly sung, but jazz — and here, scat  — is an art form unto itself. It's handled without the finesse and detailed awareness the group uses on its other work. Similarly, the doo-wop classic In the Still of the Night is left as a glee club's version of a doo-wop tune. Again, the genre hasn't been mastered or transformed. And the spoken parts are goofy, letting go of any legitimacy the song might still have had. Even Billy Joel's Lullabye, a well-sung ensemble piece, surely would have benefitted from being more intimate; less the precise, gentle march, and more the breaking, whispered confession to an already sleeping child. Dynamics and intimacy are a challenge the group beautifully achieves in Timor et Tremor and City Trees, so listeners know it's well within the group's skillset.

In America's capital, a group not so unlike The Swingle Singers is just beginning to find its footing. The promise of the album's opening is of a group that creates a genre all its own; the best of all its sources. It's a joy to behold, both when they perform the material live and on Opening Statement. The danger of the album's second half is the factionalism of those disparate influences. Just as these expert singers must, and do, blend seamlessly until they become one voice, so must the material that forms the group's signature style be cohesive. When that becomes second nature, The Capital Hearings will be nothing short of unstoppable.

Hailing from the Washington, D.C., area, The Capital Hearings are a CAL group composed of music teachers, choristers, rock band singers, and the like. The group's music style is a unique one, tackling various genres from classical and jazz to contemporary covers. The debut album Opening Statement really showcases the group's polished sound. Although much of the project is geared more towards a classical audience, the beautiful arranging and singing is bound to draw in listeners from every walk of life.

Opening Statement falls somewhere in the spectrum between classical stylings and easy listening. Within the first few selections of the album, the overall concept is determined. But this does not mean a listener isn't in for any surprises. With a Lily in Your Hand kicks off the album with a traditional classical feel. The song has plenty of energy as it verges on an almost operatic tone with very rhythmic vocals. The album then transitions the listener into an early 1900s mindset with A Nightingale Sang in Berkeley Square. This track is wonderful and filled with nice harmonic movements and a tight blend throughout. The Capital Hearings have such a knack for taking songs that may fit in similar genres and making them sound diverse.

The group also has a real talent with transforming more modern tunes. Doubting Thomas and Light Up the Sky are notable standouts on the album. The layering of parts in Doubting Thomas falls in the realm of exceptional along with the group's ability to match the soloist dynamically with almost every phrase. Light Up the Sky, while a bit imbalanced at times between the backing parts, has really great group harmonies and a modern sound that is a nice change of pace from the other selections.

Although Lullabye has been covered greatly, The Capital Hearings' take on the song is without a doubt my favorite. The group crosses between a more formal choral approach and current a cappella standards of creating an instrumentation feel. Vocal parts rise and decay over other parts, which adds so much interest into an already great song. The song is only furthered by an impressive soloist.

And I would be remiss if I did not mention the album booklet. It is without a doubt the most professional work I have seen in the a cappella community. Much attention was given to this project.

Issues with this album are pretty much non-existent. With a myriad of good work, you occasionally find that some tracks just cannot match up with others. While there is nothing technically wrong with songs like In the Still of the Night or Here Comes the Sun, sometimes there is little innovation or songs are simply just "nice" to listen to.

But overall, Opening Statement is a joy to listen to and even has the ability to further your beliefs on what a group can vocalize harmonically. Whether you like the classical genre or not, please take a listen.

Hey, you. Over there. Wanna buy a chord? You know, chords. You remember them, right? Those things we used to sing in a cappella before the "jang-in-a-jow"s and "jin din joh"s took over, sending us directly into the angsty a cappella future? You want to buy a chord. You need to buy a chord. The Capital Hearings have a chord to sell you. Buy it, and you're a step closer to wondering why we ever gave this stuff up in the first place.

The first two tracks on this album, With a Lily in Your Hand and A Nightingale Sang in Berkeley Square, sound like perfectly-executed classic vocal jazz, until you discover that the first is an Eric Whitacre piece and the second is a Manhattan Transfer arrangement. That's when I realized that The Capital Hearings were playing at a difficulty level much higher than I expected. This album jumps from genre to genre, alighting from modern jazz to alternative to classical without caring that these things often don't go together. By the time I got to Earth, the group's first modern cover, I was absolutely sold on the concept. The arrangement (by DePauw University School of Music faculty member Gregory Ristow) is perfect for The Capital Hearings; the group's clear tone and precision is highlighted to great effect, with bell tones and rhythmic phrases combining to create an intricate sound.

I could have done without the artificial LP record scratching and flat sound mixing in the beginning and end parts of In the Still of the Night. It's an old song, but it's not older than a lot of the other songs on the album, and setting it apart with silly effects doesn't actually enhance the listening experience. But while I'd normally shudder at yet another version of Billy Joel's Lullabye, The Capital Hearings execute the arrangement originally written for The King's Singers with great warmth.

The group states in its (superbly thorough) liner notes that the singers believe "great music belongs together, regardless of genre". You'll be glad for the genre-hopping, sure, but also for the reminder of the sound of chords.

CDs are available at www.thecapitalhearings.com and include liner notes with complete lyrics. The album is also available for download on iTunes and Loudr.