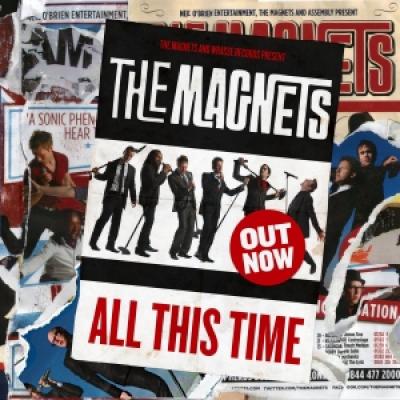 Let me begin this review by saying that The Magnets' 2006 recording of Three Is a Magic Number from their album Kennington Sessions is one of my favorite a cappella songs of all time and still stands on its own against any song in my contemporary a cappella collection.* Coming from that perspective, I have to say that this 2013 album falls flat.

In some senses All This Time seems almost like the dreaded yearbook album from collegiate groups. The album undoubtedly sounds a lot like the live group, with most songs featuring a bass, a soloist, a duet part, vocal percussion, and two other accompanying parts. There are probably a few more songs than there ought to be. Enhancements via post-recording production are minimal to non-existent. It doesn't seem like much, if any, auto-tune has been used; and to The Magnets' credit, most of the songs are nicely in tune. However, some places get slightly out of tune, and one spot in particular (namely the soloist for A New England) is quite substantially out of tune. The balance between parts is often off, with the bass and vp sometimes sounding muddy instead of popping. One of the songs (All This Time) ends with a weird audio segment involving an out-of-tune bass note, followed by a throat clearing, followed by a word or two that I can't make out. There is no unifying theme; some songs are jazzy, some pop, and some more doo-wop. Most of the arrangements do not grab the listener's attention. All of these errors are things I'd expect from a collegiate group, but not a professional group.

To me the story of this album seems to be "Hit and Miss". That is, even the songs I like the best have aspects that I really don't enjoy. For example, After the Rain features an interesting, somewhat minimalist arrangement of a pretty song. The soloist is fine, the "ooh"-ing backgrounds work for me, but the song has an "instrumental" section halfway through that is a mess: tuning and rhythms are slightly off, and rising and falling dynamics create an odd "wah-wah" sound. By contrast, Ever Fallen in Love also has an instrumental section halfway through, but one that adds to the song's musical trajectory. In this song, the issues are with three of the soloists — one that sings some passages in a kazoo-like style (shooting for sax or clarinet?) that I don't like, one that is a bit out of tune in places, and a third that uses a Louis Armstrong Satchmo style that doesn't seem to fit the rest of the song. The next track, Rolling in the Deep, is an interesting arrangement and noticeably faster than Adele's original. One part of it that works well is when the vp and accompanying parts abruptly stop for twenty seconds of tight harmony chord progressions before coming back in. In this song, the failing is that the bass part is so muffled that when all other parts are singing it's nearly inaudible. Dreamer's Ball is probably my second favorite song on the album, but it's very old-fashioned and consequently seems out of place. A New England is my very favorite song on this album — the melody and words of the song itself sound like something I'd like on the radio, and the arrangement here is very well done — but it has the aforementioned issue with the soloist's intonation. I could go on, but space is tight so I will refrain.

To conclude this review, I just listened to another song I like from that Kennington Sessions album: All The London Girls. It has everything this album lacked — interesting production with sound effects that include something like a piano at the end, vp and bass that sparkle, spot-on intonation, a cool arrangement that includes an interesting change of pace in the middle, and a beat that makes me tap my feet. Oh, well... maybe next time.

[*Editor's Note: RARB has since learned that Three is a Magic Number is not a purely vocal track.]

In nearly twenty years of listening to a cappella music, I have long been delinquent in my failure to purchase or listen to any offerings from the British sextet The Magnets. Receiving All This Time in the mail, I was anxious to finally dig into the group that RARB previously called "one of the hidden treasures of the a cappella world". I was surprised to find that this initiation would come in the package of a concept album, a tribute to the group's favorite British songwriters across multiple genres, along with two original tunes. Concept albums can be forced, disjointed compilations in my listening experience. Luckily, All This Time is neither.

All This Time proves The Magnets to be creative, talented singers and arrangers capable of converting rock, punk, pop music, and more into toe-tapping, easily digestible harmonies with a characteristic sound. I find it especially interesting that the group foregoes artificial tuning and the so-called "lasers" that more and more groups run towards, yet they do not sound especially antiquated. Sure, the resulting tuning is hardly perfect, but the sound actually shines with the natural sound of talented singers with nice voices; and the sound breathes, not having the life or personality choked out of it. There's an easy presence and comfort in the sound and the harmonies, which overshadows any minor tuning deficiencies. In addition, the group offers a pretty broad mixture of older, acoustic-sounding songs with some that benefit from more processing and effects on the percussion, without ever stepping too far into the electronic sound which many suggest is the future of a cappella. Regardless of that suggestion, there will always be a place in a cappella for the kind of music featured on All This Time, which oozes with personality, natural harmonies, and charm.

The arrangements, all attributed to either current member Steve Trowell or former member James Fortune, are clever, interesting, and diverse. As someone who enjoys a good reinvention, I especially like the radical overhaul of the Buzzcocks' Ever Fallen in Love (With someone You Shouldn't've), where Fortune transforms a driving, fuzzy original into a sultry, Cab Calloway tribute. Fortune and Trowell use many other effective arranging tools and techniques, from the breathy and murky sounds in I'm Not in Love to the sparse simplicity in Changes, and the doo wop swing and muted trumpets in Dreamer's Ball to the thicker textures in Solsbury Hill. It's all very pleasant-sounding and very effective.

Production by Julian Simmons is clean and accessible, ensuring that this will likely not be an album where your friend says "THAT is not a voice" — though this approach may limit the appeal to some in the contemporary a cappella community. It doesn't push any boundaries sonically, it doesn't scream originality like Postyr Project or Arora. As a result, however, it probably appeals to a much broader audience.

All This Time is an Anglophile acaphile's dream, offering fun, accessible versions of music from acts such as Peter Gabriel, Sting, Queen, Adele, and more. The unifying factor is something I can only identify right now as "The Magnets" sound: great singing, simple but creative arrangements, and lots of personality. There isn't a lot of urgency or edge to this music, and there isn't a lot of overt passion, but it's plenty good enough for me. Sometimes, in our haste for the next exciting new thing, we lose sight of simple, clean, natural harmonies. In those moments, All This Time will provide a great reminder and a great listen.

If I were asked to describe The Magnets' sound in a single word, it would be "classic". Barbershop, doo wop, and crooner sensibilities combine with fantastic beatboxing and modern a cappella arranging to create a fresh yet refreshingly classic style. These talented British gents have brought all these disparate parts together seamlessly to produce All This Time.

The production value on this release is quite good. Studio tricks are minimal, but meticulously thought out. The only small complaints I have are that the bass and vocal percussion snare hits sound a tad muffled at times compared to the upper voices.  It's an EQ thing and minor, but a little distracting. Every track is unique and artfully crafted, yet from Solsbury Hill to Changes, the tone of the album is consistent.

What's really special about this album is its passion. Great care is taken with each track of course, but The Magnets have an emotional connection that brings this album to life in a way few groups can. After The Rain is touching. The best cover of Adele's Rolling in the Deep can be found on this disc. Dreamer's Ball is a jazzy blend of barbershop and doo wop that could be overlooked by most people, but it is probably one of the finest tracks on the album. And my favorite track by far is A New England — it's powerful and heartfelt, and I absolutely love the percussion! This album gives you everything — jazz, big band, folk, barbershop, doo wop, even some R&B and rock!

All This Time is a true treasure. It's not a holiday album, but it has that same sentimental energy and leaves you feeling good. It's a great album to give to your loved ones. Let your ears drift over to the British Isles and let the vocal attraction of The Magnets pull you in.

This album can be purchased from The Magnets' online store.