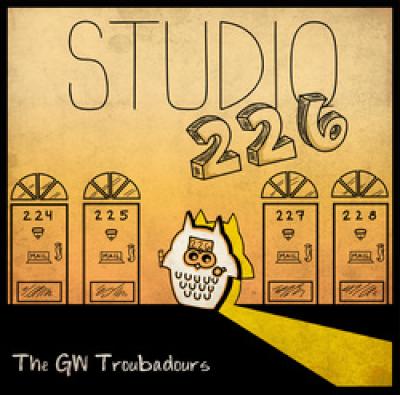 The GW Troubadours have been recording and releasing music for over two decades, so it's an interesting choice to see this veteran group release an EP instead of a full-length album. The focus on a shorter track list pays off for the Troubs; Studio 226 is crisp, clean, and energetic.

The Troubs have picked a cohesive selection of songs here; they all go together and fit the group's uptempo pop style. The opening track My Body is especially strong — there's energy radiating from the soloist down to every member of the group and percussionist Ross Levy. The song follows a nice arc, with good dynamics and a solid rhythm. (As a side note: hand-clapped rhythms are usually extremely grating in recorded music, but they're placed so well in the mix on My Body that they do what they're supposed to — give rhythm without becoming the only thing a listener hears. As a more general note beyond this one track, Studio 226 and the Troubs have benefitted from Danny Ozment and Emerald City Productions' approach; the EP is natural and clean without sounding over-processed. Great fit for this group.)

Throughout the rest of the EP, the group is solid; there are no real "WOW" moments, but the songs are fun to listen to. Soloists tend to play a little heavily with vocal runs, but those generally fit with the songs' vibe (such as a Fugees-inspired version of Killing Me Softly). These arrangements veer a little on the simplistic side, with the exception of Sunrise which has a few subtly moving parts beneath the main backing melody. In general, this isn't a bad choice — I'd rather hear a group nail a simpler arrangement than fail at something more difficult. There's no mention on the album or the group's web site of who arranged these songs, but it might benefit the Troubs to work with an outside arranger who could help the group step up their complexity a little bit, just to give these songs a little more depth and texture.

Also, the Troubs could've taken a little more care with their song credits; while there is some dispute as to the songwriters of Killing Me Softly, the original performing artist was Lori Lieberman, not Roberta Flack; the group credits Flack on the CD but credits the Fugees on its web site.

Overall, Studio 226 is quite strong and shows a lot of promise. While RARB's scoring choices offer only five choices, this EP is definitely on the high side of a "3", and the Troubs have a lot to be proud of with this recording.

If you are not paying close attention, Studio 226 will breeze right on by. It is sung sweetly and mixed gently, and since there are only six songs you can easily listen to the whole collection in one sitting. Without anything here to really rile you up or tug your heartstrings, you can also very easily forget to pay attention. No matter how many times I play this album, my mind glosses over the generally inoffensive stylings and instead latches onto those little nuances that aren't quite up to par.

Here's what I took away from the GW Troubadors.

The syllables in the background are resourceful but not entirely tasteful. The long "eeee" sound at the beginning of To Love Somebody and Sunrise leaves a sour taste that lingers even after they switch to the more graceful "ooo"s. The "va"s in Killing Me Softly and mishmash of "wananana" "dem day" and "ven" of Accidentally in Love are also poor imitations of instruments that batter up against the soloist lyrics.

The percussion is both intricate and bland. The percussionist Ross Levy and the editors do a great job arranging tom fills and overlapping other sounds for a convincing drum kit. Danny Ozment goes the extra mile to mix them clean and punchy. In spite of (or because of) the high production value, the drum loops are incessantly repetitive and the sterile, homogenous sampling gets to be overbearing.

The song selection expresses a very narrow range of emotion. The first four songs are the same mellow pop tempo with simple background "doo doo doh doh" backgrounds marching over a simple rock beat. None of these first four numbers really builds from the beginning to the end. The lack of direction in the narratives, the arrangements, and the dynamics are what cause so much of the album to feel so unsatisfactorily fleeting.

What variety there is on Studio 226 is not distributed effectively. Killing Me Softly is the most emotive song, and it gets buried at the back. Just when you snap back to attention and think the GW Troubadours are onto something, they lay on an Accidentally in Love that is overflowing with enthusiasm and underwhelming in musicianship. (Also, Accidentally in Love is not accurately credited in the liners as a mash-up with Lovesong, originally written and performed by The Cure).

What the GW Troubadours have put together is something to fill the air. I can listen to this album 2-3 times in a single car ride and without really concentrating get all the way from my driveway to the supermarket parking lot. There's nothing particularly bad about Studio 226, it's just that there's also nothing particularly outstanding. When you float with the familiar in music, someone will always find something you could have done better. To captivate an audience, sometimes you need to throw caution to the wind and do something you've never heard before.

We have a continuing fascination with EPs. More musicians are taking this route as a way to stay relevant and release fresh content as full-length projects are being designed. I am in favor of this mentality, and Studio 226 by the Troubadours from George Washington University is a good testament to why less can sometimes mean more.

The six tracks on this project make up some of the group's "newest arrangements, as well as a couple of our longtime favorites" according to the group's web site. All the tracks are consistent in production, with Accidentally in Love being the only track showcasing major vocal effects. Collectively, there is not a great level of intensity, but that is the result of song selection. None of the tracks require belting or extreme emotive singing.

Everybody Knows, Sunrise, and Accidentally in Love are the songs that really grab one's attention in the EP's 21-minute span. Everybody Knows comes across as easy listening as the arrangement has a bit of a different feel from the original song; attention seems to be focused on filling every bar with steady singing, versus the constant strumming of string instruments in John Legend's original. The groove that is created from the bass and percussion is definitely worth noting. Like other tracks on this project, the cohesion between the two is great. Sunrise also conveys an easy, laid-back energy. The soloist has a very indie-like voice that is serene. Accidentally in Love finally releases the energy that has been stifled throughout the previous tracks; the '90s feel is definitely captured by heavy percussion and vocal effects. What makes it even better is the soloist selection — great voice, perfect fit. All three soloists from the previously mentioned tracks do an outstanding job. Each song is sold perfectly by each lead.

Studio 226 is a really good EP all captured in a short frame of time. Arrangements are not very complex, but all of the tracks seem to fit better with one another because of it. If you're looking for something nice and easy on the ears, Studio 226 is definitely worth checking out.

Studio 226 is available now for download on iTunes and Loudr. Visit www.gwutroubadours.com for more information.