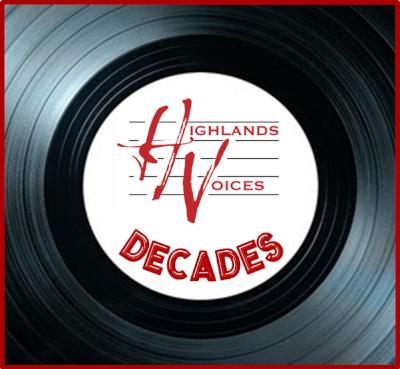 To be fair, it's kind of hard to submit a high school album for critical review right now when teenagers are penning full albums of original songs and schools are hiring enormous production teams (ones that include separate vocal and percussion editors from different studios on top of mixers and mastering services and the best arrangements money can buy) to take their work into the stratosphere. Expectations for recorded high school a cappella simply couldn't be higher. But what's actually missing on Decades seems to be the High School Hip Factor: oh, to be fabulous and young and talented (the members of Highlands Voices have this in spades), and to not have to sing glee club oldies songs like Devil With a Blue Dress On and I Think I Love You even though our parents will eat it right off our hands. It's all squeaky clean and cutesy poopsy and I know this album must be selling really well because of this very broad appeal, but the high school experience simply isn't squeaky clean and cutesy poopsy from entrance to graduation. There are darker, tougher corners to explore and more advanced material to grow into, and I'm not hearing that side of high school here. And given some of the powerful leads, from every single gal and many of the guys, too, I think we can go about a dozen levels up in difficulty and content and see what happens. Use the unique interpretation of the special Good Riddance as a baseline with its effective vocal trio and new feel, and then power up from there.

However, the production work from The Vocal Company is particularly lovely and sensitive on Decades. Everything is crisp and as locked-in as one can get without compromising the youthful sound and natural dynamics. Unfortunately, the fine production makes the actual product itself more disappointing: so much money spent on getting the sound right, but a back cover with big typos and an omitted song title, oops. In such a competitive arena, details matter.

There's a lot of room for Highlands Voices to catapult upward on the recording scene, given that the talent (2014 ICHSA winners!) and soundscape are already neatly in place. Time to roll out a Really Big Deal for the group's next release.

The Highlands Voices is a mixed group from Northern Highlands Regional High School in Allendale, NJ. The group just released its debut album, which features a broad range of songs that most high-schoolers probably aren't familiar with (I Think I Love You, Devil With a Blue Dress On, Everybody Have Fun Tonight), which gives them a uniquely fresh spin on this disc.

The result is an album that's a lot of fun to listen to and never stays in the same place for too long. The Vocal Company captures the group's energy effortlessly — the opening riff of Conga is handled with ease, and the backs are super-punchy on Everybody Have Fun Tonight. There's a rich fullness on Beautiful Day, and the rhythm/energy of Good Riddance is tweaked enough from the original that it sounds like a fresh new song.

The challenge for the Highlands Voices is that these singers are still young, so it's not always easy to find soloists who have the right vocal maturity to match these songs. The high parts of Stronger in particular seem a little challenging and get a little shrill, but the same soloists take the lead/harmonies on Brighter Than The Sun with no issues whatsoever. There's a little shrillness in Devil With a Blue Dress On as well. Tenor Justin DeParis handles all the moving lines on I Think I Love You charmingly, but some of the held-out notes both in the solo line and in the backs could use a little more movement through dynamics or phrasing to help drive the song forward.

Still, some of these soloists knock their songs out of the park. Soprano Patricia Wilson has earned a special mention with her take on Beautiful; she handles some Christina Aguilera-style vocal runs beautifully and without sounding overly showy. This listener didn't love having that song presented as a mash-up with I'll Stand By You, but the artistic choice gave an interesting spin to both songs. The soloists on Go the Distance perfectly capture the song's musical-theatre vibe.

Most of these songs were arranged by the group's director Thomas Paster, and those arrangements definitely work for this group. I'd love to hear Paster push the group to include more dynamics/phrasing in the future, as that could help elevate the group from good to great.

Also, an important kudos to the group for thorough liner notes: not only is each song's arranger and soloist(s) credited, but the original songwriters are mentioned as well. A cold-eyes review probably would've caught a few errors (like the omission of the album's first song from the track list on the back of the digipack, and the fact that the notation of soloists is written inconsistently as "solos" and "soloists"), but overall the album credits were more thorough than many a cappella albums that cross my desk for review.

Wait a second. This is a high school group, right?

The album labels the Highlands Voices as a high school ensemble, yet the voices showcase talent that states otherwise. As time progresses, more and more high school groups bridge the gap between collegiate groups and high school ensembles. Decades is a strong testament to what good music should sound like, regardless of age or labels. While there are some factors that still attribute this project to a group that's still developing, the Highlands Voices are no doubt on their way to something great.

Normally, you would save the best for last, but every now and then you have to break the rules. The best part of this album, in my opinion, is the soloists. Often times in albums that feature a large number of soloists you are lucky to have two or three lead singers who steal the spotlight. In the case of Decades, there are multiple. From the opening track of Beautiful Day throughout the project's entirety, we are exposed to well-developed, energetic, and captivating singers. Some tend to stand out more than others depending on what your genre preference may be, but none are bad.

The only factor that hindered the soloist score from being a perfect "5" lies in certain songs having multiple leads instead of focusing on one. This is one of the elements that expose this album as being high school in nature, in its attempt to have as many singers featured as possible. Conga and Good Riddance are casualties of this decision, as the flow of two good songs seem to be a bit disjointed with the addition of a new lead voice.

Beautiful/I'll Stand By You is an example of two unique, strong voices that blend well together and are entertaining to listen to.

What works further for this album is the sheer energy level. This area proves to be a struggle even for the likes of collegiate and advanced groups, but the Highlands Voices really nail this aspect. Conga is the energetic powerhouse of the album that exudes confidence and a rhythmic flair that makes any listener want to get up and dance. Devil With a Blue Dress On also keeps the pulse of the album with quick percussion, a mix of jive and pop, and a huge ending that mimics a big band feel.

While this album is good, there are some things that are hard to look past. For one, some of the album seems a bit too compressed. While the overall sound is good, I feel that at times it seems a bit constricted and I could have received so much more. Other items stem from artistic choices, like in Good Riddance, with its arrangement choice of starting and ending in a slow tempo fashion instead of keeping in line with the original feel.

Even with small issues such as this, Decades really showcases what talent is all about and that it indeed knows no age restriction.