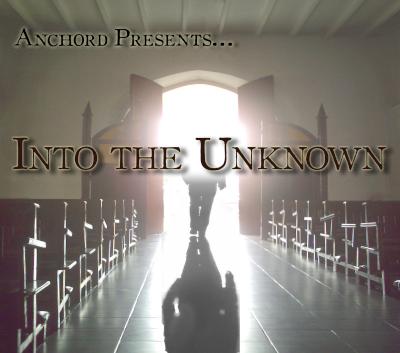 Tufts' Anchord provides a passionate, detailed description of each track in its liner notes for Into the Unknown. The group makes it clear that while this is a yearbook album, there is a deep emotional connection to each song. Unfortunately, these sentiments do not effectively translate into the album's music.

The overarching point that must be made about this group's offering is that of musicality. Many of the soloists featured on Into the Unknown deliver text clearly enough to be understood, but with syllabic emphasis that likely resembles the original soloists' choices more than actual speech. Covering a song is an opportunity to bring new life to a piece by changing its medium or fixing its shortcomings, and Anchord doesn't take advantage of this in any of the album's tracks.

In general, background singing is not one of this album's strengths. There is a distinct lack of energy in the background vocals from the very first track, Shackles, despite its text about praise that lends itself to a passionate outpouring. The arrangers' choices in syllables are often also a weakness, with a clear purpose for syllable selection either not present or not realized. For example, the glottal stops in the refrain of Make a Move are abrasive at best, and the "near near noh"s at the top of Stand in the Rain obscure the song's focus. With no added effects or vocal techniques used to attempt instrument emulation, these syllables serve as a distraction. Even one of the most effective arrangements in the album, Follow Me, could not quite break the "3" mark because it simply does not transcend transcription of the rhythmically-complex original.

Originality does not always translate to success. One of my least favorite tracks on the album is Anchord's Fix You, which begins as a typical cover, albeit with a soprano voice that sticks out of the texture. Personally, I have no problem with the inclusion of sacred text for the purpose of augmenting a song's meaning, and there is certainly potential for that in many songs. But such a mash-up of otherwise unrelated spiritual and secular text should not be presented together, for the first time, in the climax of the song. Perhaps including the spiritual text at least once earlier on its own or in the background of one of the earlier verses would have made Anchord's choice less jarring.

The saving grace of this album is in its studio production. The tuning is excellent and it is clear that many of the dynamic choices were made post-tracking. In particular, the balancing of voice parts in Walk on the Water and effects used in Meant to Live redeem these otherwise underwhelming tracks.

With a more cohesive and effective presentation of original ideas, Tufts' Anchord could certainly break the "3" barrier. Hopefully in the future, this group will take strides to become less reliant on studio engineering and original artists' choices for its covers, and integrate more of its own passion into its product.

Into the Unknown is a solid project that meets all the criteria on a technical level. The mixing and mastering of the album lets the voices shine, the singers deliver great attempts at really performing the songs, and the song selections not only sound right for the Christian a cappella group Anchord, but it all feels right. Yet, the music is missing a small amount of conviction that is just barely holding it back from being truly moving.

What I really enjoy about this album is the overall spiritual message it delivers. I get the feeling that Anchord enjoys performing songs that have purpose behind them. This being said, song selection is not simply comprised of church hymns or gospel tunes; Anchord has incorporated many contemporary tracks.

Shackles is a great choice for an opener. The rhythm section works in tandem to really add both energy and establish a groove with the bass and percussion spot-on. Though I wish the energy was turned up one more level as I think the group has just a little more to give. Anchord feels even more at home with Walk on the Water, as this track embodies more of a Christian Pop sound. All parts of the arrangement are very rhythmic and there is a constant balance between the voices acting as the instruments versus harmonies being created to support the lead.

The powerhouse of the whole album comes in the form of Meant to Live. This track just fits with the overall feel of the entire album; it delivers an inspiring message with tons of energy as the voices do not hold back. The group acknowledges in its liner notes that inspiration for many tracks comes from a spiritual place, and notes in the credits for Meant to Live that "through Him [Christ], we may experience life to the fullest."

While there is a lot of good content on Into the Unknown, there are times when a song leaves me with little to walk away with. I Run to You creates an atmosphere of easy listening, but after its conclusion, I'm left wondering how much it added to the entire work. Fix You stays fairly close to the original with little risks being taken; there is more emphasis put on the lower harmonies in Anchord's rendition than others', mainly in the chorus, but not much else aside from this.

Much of the conviction that's missing from Into the Unknown could have been remedied if more chances were taken, like they are in the Mumford Medley. At times the track feels light: some times there is a single soloist, some times there are multiple leads. What I really enjoy more than anything else with this medley is Anchord's ability to use songs simultaneously to build energy.

Anchord has crafted a project that feels right for the group. Overall, Into The Unkown sends a positive message that has the ability to uplift listeners.

I am a sucker for Disney movies and Happily Ever After. It's the positivity. It's taking likable characters and putting them through the burner: losing loved ones, fighting giant octopus women, endless winters, angry mobs, poison apples, and still realizing that you don't need the magic feather to fly. Plus, there's singing. Into the Unknown by Anchord from Tufts University gives me that same sense of optimism. This Christian group uses pop sensibilities to express its faith. However, there are several matters that keep this album from shining the way it could: arrangements, solos, and production. The word that comes to mind is "safe".

Safe arranging permeates this album. Solid voice-leading and a full sound, but nothing innovative. That's not a problem in and of itself: tried and true works for a reason. But the group combines this with one of my biggest pet peeves, "jin jo wah" syllables.  The good thing about how Anchord chose to combine these two aspects of arranging is that the group stayed sensitive to what the songs are intended to convey. Shackles grooves in a really fun way. Mumford Medley is absolutely seamless. Down in the River to Pray is simple, but switches from what I like to call "Boy Corner" to "Chick Click" depending on the gender of the lyric; a nice touch. My favorite part of the entire album is the "Ah ah oh, oh, oh, oh" section of Make a Move.

The whole group is comprised of talented singers. The soloists are no exception. But once again, "safe" is the word that applies. Or maybe "pretty". What I want to hear, however, is "passion", and there are glimmers here and there. The end of Walk on the Water has some nice drive. Fix You is tender but intense in a really great way. My advice: be brave. There's plenty of vocal talent to be mined.

The production is sterile — overly pitch-corrected, and way too much done to the bass. Fix You and Down to the River to Pray are two quiet songs, and the lack of delicacy in the bass is jarring and hurts the overall sound. It's fine in songs like Shackles, Make a Move, or Follow Me, but at least half the songs are much less heavy. This is by far the biggest issue I have with this album. Mumford Medley and Make a Move are probably the best tracks: balanced, sensitive, strong solos and appropriate arranging. The elements came together beautifully in these two tracks.

I have to compliment Anchord on great song selections: they flow together well and take the listener on a bit of a journey. Getting a cohesive feel for an album is incredibly difficult, so well done there. Overall, this is an album to be proud of.