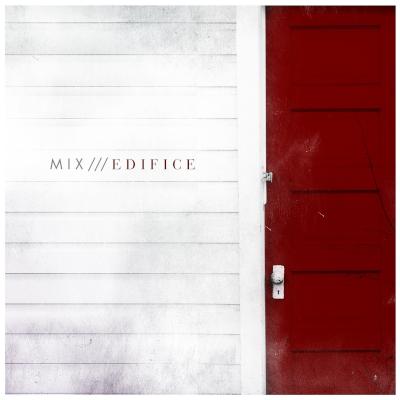 MIX, from the University of Colorado Denver, looks and sounds a lot more like a professional group than a collegiate group. The ensemble for this release has nine voices made up of students majoring in some tilt in the music realm, with direction by Dr. Erin Hackel. Sometimes the voices are more street, sometimes more jazzy. But the overall sound from the group is sweet honey, and the tight focus on size and talent has made it so.

One can tell that MIX worked very hard on inserting lots of creativity into its work, both studio-created and vocally-created. This is a group that's keen on dropping in sound effects of the machine/gritty persuasion: prisoner shackles, a radio, a train, but also many unique, cool, hard-to-name sounds. To me, the sound effects work well at building the creativity sphere, and I stopped the tracks a lot my first listen to make sure I heard what I thought I just heard. Compelling listeners to come closer, listen harder, is a power unique to musicians.

I am both less convinced and more convinced at the creativity measures in the arrangement structures (meaning, the arrangements are hit and miss). Bottom of the River starts out in its familiar foot-stomping manner, but somehow, magically, ends as an explosive Funk Opera that's simply ridiculously cool and must have taken forever to mix and perfect (awesome job, David Longo). But the too-long and curiously winding Come On A My House wasn't a great pick to open this album and set the tone. The track is a "Wait, is this still the same song?" kind of work: multiple soloists, a rap section, even backgrounds singing: "pom-e-gran-ate-ap-ri-cot". We also have the spectacular Fool For You that in its creative construction manages to embrace both hard and soft, giving this song dynamic and expression levels rarely heard on the college scene, plus Latch, which features memorable spoken word performances. Not to mention the sweet, sensitive closer 'Til the End of Time. If Edifice opened too disjointedly, it sure made up for it with this hat trick ending.

Overall, the bold approaches taken in Edifice are working, and the group dynamic is really working. MIX has a lot of powerhouse soloists on top and an earthy bass to anchor down the ship. The overall vibe on Edifice is a chill, in-the-groove, in-da-funk feel, and there are fabulous songs in this release to revel in. Buying this album is money well spent.

For me, there are three types of groups: groups who simply cover songs, groups who try to reinvent the wheel with unique takes on both covers and original songs, and groups who take the wheel, realize there are enough already and create something truly genius. MIX easily falls into that last category. Edifice is in a class of its own. Each listen to the album enlightens you that MIX (from the University of Colorado, Denver) is not just reimagining songs, they're truly creating a vocal art form.

For starters, Edifice opens with a vintage sound in Come On A My House that pays homage to I Got a Woman (opb Ray Charles). MIX crosses multiple spectrums within this track, from jazz, R&B, rap, and dubstep, and it's all done very fluidly. While I did not particularly care for the rap section, its inclusion did not hinder the overall greatness.

As Edifice continues, MIX develops an atmosphere for the listener through incredible arranging. Bottom of the River is a strong example, as it grows into this spectacular culmination of energy, unhindered singing, and alluring and somewhat haunting harmonies halfway through the track which catches you off-guard.

Songs such as Plain Gold Ring shows MIX's ability to keep things simple. The song has a strong groove, starting with a '90s R&B feel to it until the last minute, when MIX unleashes a multi-layered, high-energy ending. The group's delivery is flawless.

Latch is easily the prime example of why MIX dominates in creating a musical landscape like no one else. The heavy production is warranted by the necessity to create the song's synth pop sound that features some seriously smooth backing vocals. The pulse is never lost, and is even furthered with the addition of spoken word and a rap section, elements I have not heard combined in a cappella. This group truly has a knack for being inventive.

While Edifice is groundbreaking, it is not without some faults. There are moments within tracks such as Bottom of the River and Daddy where the percussion is not consistent in production choices, which is important for a group who relies heavily on the groove. There are also some stylistic choices, which could have helped the group's sound come full circle, such is the case with 'Til the End of Time. With its soulful feel and soft intro, I wish I could have seen a more unified front from the leads to show a bit more restraint similar to the opening; I think this was the only true aspect missing from Edifice.

MIX has such a unique sound and is exactly what the a cappella community has the potential to be: all-encompassing. I get the feeling that it is truly about the art for them, which just so happens to fit the album's title well, defined as "a large abstract structure." I cannot wait to hear more from this group and see where this distinct sound goes.

With Edifice, MIX has created an album filled with engaging attitude from its soloists and many innovations in its arrangements. Unfortunately, unlike what the group's name suggests, the album's emotional tone is consistent to the point of being stagnant.

Edifice mounts a nine-song set that appears diverse when the original track list is compiled. However, MIX has created its own consistent style on each of them, and while this creates a sense of identity throughout the album, it actually takes away from the potential for an emotional ebb and flow in the track list. With only a couple of exceptions, the soloists do an excellent job of presenting the necessary swagger implied in the lyrics. There seems to be a dearth of emotional honesty in terms of the song choices, however, creating a distance from the listener.

Perhaps even more noticeable from a listener's standpoint is that the vast majority of the music on this album is in the minor mode. Even the songs with major sections, Latch and 'Til the End of Time, have the boon of this diversity stifled, as the range and feel of the arrangements obscure the potential for added brightness. As a result, there is a certain heaviness to the album that negatively impacts repeat listenability.

While few entire individual tracks are outstanding, MIX must be commended for making strong arranging choices that result in some brilliant ideas. For example, the first track of Edifice opens with an engaging re-harmonization of I Got A Woman, which is my favorite part of the entire album and is such a substantial chunk of the song (1:40) that it deserves its own track listing. While clever, its lyrically-based pairing with the weaker Come On A My House is not an obvious enough link to warrant just one track without any sort of mash-up of the two songs. A few transitions on this album are very strong, most notably the ending of Ramalama (Bang Bang) into Plain Gold Ring, which is seamless and unifies the core of the album.

Some of the group's strong choices, however, result in a few miscues. One such choice is the interpretation of Barton Hollow, an oft-covered contemporary folk tune. The Civil Wars tune has vocals that seemingly lend themselves to a cappella, but the original is not always handled properly with regards to creating a cover. In MIX's case, the tempo is taken up a few clicks, and that subtle difference makes the entire track feel like a runaway train, despite the impressive handling of percussion and soloists' harmonies. Additionally, some of the balance and voice leading of background voices in Bottom of the River and Daddy do not serve the music well and become distracting. The arrangement for Latch has a strong focus on light instrumentals to highlight the various soloists, but does not take full advantage of the potential for strong vocal harmonies in the refrains.

MIX does not credit individual arrangers in its liner notes, which is a shame unless the entire group collaborates to create backgrounds. One outstanding group member deserving of individual mention is Michelle Rocqet, who is heavily featured as a lead vocalist on Edifice. Her ability to subtly shift in style between two adjacent tracks in Ramalama (Bang Bang) and Plain Gold Ring is admirable, but perhaps her most impressive contribution is what the liner notes describe as her "original spoken word" in Latch. The raw delivery of this slam poetry creates the strongest emotional connection between the vocalist and the listener the album has to offer, and provides a smooth transition from the song into the original rap that follows.

In conclusion, Edifice is a very solid contribution from MIX overall, but could be truly excellent with more variety and lightness added to their core.