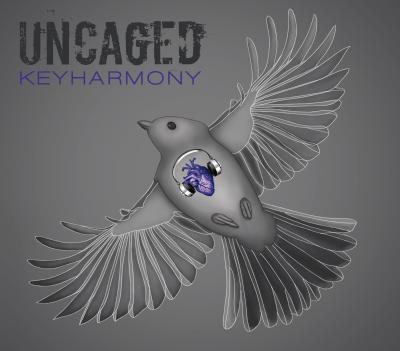 Uncaged showcases great voices — delightfully heavy on the sass and spunk — but highlights a group that's still finding its collective way. Enter the EP format, the perfect choice to make forward progress without a huge undertaking.

KeyHarmony's best selling point is turning hit songs into definitive KeyHarmony Jams. The group does this by slashing expected tempo markings to make slooooooow, suuuuuultry remixes with plenty of laid-back swaaaaaaay. We're definitely in no rush on Uncaged, with soloists exploring all of the vocal nuances thoroughly and completely on their own punch clock.

This new direction is a great concept for My Songs Know What You Did In The Dark because it transforms the near-frantic feel of the original into something that now reads as refreshingly exotic. Add in the powerful solo from Jessica Silva and KeyHarmony really has something. That is, until the highly un-climactic chorus rolls in with a weak spot in the mix: I'm confused why the signature "light-em-up-up-up" line is so very isolated. Presented in this fashion, it nearly sounds like a pre-mix, like a work-in-progress mix, and a long warrior cry from the nicely balanced verse just prior. The production work here, which I must assume is a combination of the group's ideas and the mixers', is best described as choppy.

The significant tempo and style explorations continue. The shifts in Cry Me A River, while not totally successful from first note to last, evoke praise that there are groups willing to take these risks! It's especially effective when the alto moodily speak-sings, "The damage is done, so I guess I'll be leaving." KeyHarmony has a nice alto sound in general. Move has a vibrant peppy feel that would have done well to close Uncaged, but is welcome in the middle, too, and has the most consistent sound and arrangement on the album. Someone Like You concludes Uncaged, and the soloist sounds a touch muffled which takes me out a bit, but I do like all of the moments where the song is allowed to breathe and move freely. The group has captured a real tenderness here.

Uncaged is one firm step forward for KeyHarmony.

KeyHarmony is a young all-female group at the University of Central Florida; the group was formed in 2009 and Uncaged is the group's first recording. I always love it when new (or new-ish) groups start the recording process with an EP: it gives the group a chance to focus on just a few songs and to learn what does and doesn't work in the studio with a manageable project.

The problem KeyHarmony faces on Uncaged is tempo. These songs are all paced way too slow. My Songs Know What You Did In The Dark loses its creepy intensity, and Someone Like You just sounds funereal (and clocks in a full twenty seconds longer than Adele's original). Move is the only song that could remain at its recorded tempo, but the execution of the arrangement doesn't move or grow: there are no dynamics or changes to the voicing to make the end of the song sound different from the beginning, and so the song just feels like it drags.

The arrangement of Cry Me A River by group member TC Skowronek has some interesting moments; it's a well woven-together mash-up of the Justin Timberlake and Julie London songs of the same name. Tempo again proves to be a problem here, especially at the first chorus where multiple soloists sing together (which itself drags down the song's energy). That lethargic tone is saved with the introduction of the Julie London version — which is arguably the more somber song of the two but sounds fresher here by comparison.

The EP's closing track, Someone Like You, is the weakest overall. Again, the tempo just drags, but the soloist choice is the song's downfall. The lead has a lovely voice and can handle singing at a slow tempo, but she doesn't have the range to hit many of the high notes with power, and that's jarring to the listener. The flip side of this is that when the soloist flips into a delicate head voice for the final high part ("don't forget me, I beg..."), her frailty makes this the song's most emotive moment — that purity of emotion is what I wanted to hear on the rest of the song. A shout-out to the rest of KeyHarmony for this song: the group rallies to make this a compelling performance — there are some beautiful moving dynamics and stretchy extended notes that the group fills with emotion. With the right soloist and at a little bit faster tempo, this song could've been a knockout.

My advice to KeyHarmony for the future is to think about what makes for a compelling recorded performance vs. a compelling live performance. In an auditorium full of friends and classmates, tempo issues or song/soloist choice isn't as important — the audience is supportive and friendly. In recorded form, the group has to take it up a notch. There are a few glimmers of strength here: the creative arrangement of Cry Me A River and the dynamics on Someone Like You are both memorable. Figuring out what the group's greatest assets are is the first step; then the challenge is how to capture it in a studio recording.

One final comment about Uncaged: songwriters aren't credited anywhere. While the "OPB" credits are nice, it would be far better if KeyHarmony credited the writers of the songs as well.

Let me start with a short list of what I love on Uncaged, the debut EP from KeyHarmony: almost everything. It's an auspicious first album for these ladies and certainly bodes well for future recordings from the group.

Not to get too far ahead of myself, but I actually want to start this review at the end, and comment briefly on Someone Like You, which is the weakest number on the album. On its own it would be a perfectly serviceable, fairly straight-forward Adele cover: hocketed arpeggios in the back, no vp, pretty standard fare. It gets a few bonus points for the strong solo provided by Sarah Zorrilla, as well as for the nice moment when the rest of the group joins her in unison towards the end of the song. It falls short, however, in comparison to everything else on the release, which is just about the last thing you want in your closing number, especially on a short EP.

With that out of the way, I want to focus on everything else that goes so right. The opening number is a slowed-down, gritty version of My Songs Know What You Did In The Dark by Fall Out Boy. Again, a cappella covers of this are about a dime a dozen, but this version gives it a new groove and a new sound. My only complaint is that the bridge features a marching cadence nobody could actually follow (surely someone should have at least tried and realized it should be "left, left, left right left"). But it's a small gripe on an all-around strong opener.

Next up is Cry Me A River, a clever mashup of the recent Justin Timberlake hit and the classic Julie London piece of the same name. Arranger TC Skowronek does a wonderful job weaving the two songs together while again presenting an original take on both of them. They're clearly recognizable, yet distinctly new in their own way. That characteristic carries into Move, the third song on the release. Great arranging work by Johanna Vinson takes a somewhat bare Little Mix number and kicks it up a level by fleshing out the background and infusing it with more life, more attitude, and more energy than what's present in the original.

My favorite thing about this EP is that KeyHarmony took these songs and made them theirs. It obviously helped create a vision for these ladies, which, when combined with the strong soloists, the energy of the group, the great mixing work by The Vocal Company, and the thoughtful arrangements, makes for a powerful debut. I encourage the group to carry that momentum and focus into producing a full album at the level of the first three songs.

For a physical copy, email the group at keyharmony@gmail.com.